Hezbollah chief says he is not a war monger but ready to fight, Israel, US and its Arab allies 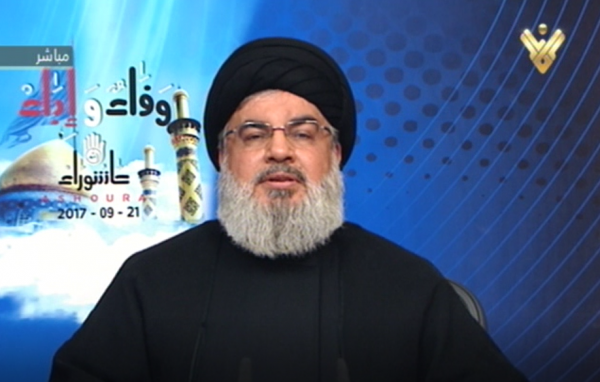 Hezbollah’s chief Hassan Nasrallah said that he is not a war monger or interested in war, but ready to fight against Trump, the Zionist regime, some Arab followers of them, or the world following them.”
“Resistance is a means to reach the ends and it should not become a goal per se,” said the Secretary General of Lebanon’s Hezbollah, on Thursday, “this is the principle governing over the behavior of all divine prophets, to fulfill the duties assigned by God, not follow the goals of their own desires.”

Nasrallah made the remarks on the occasion of the outset of the Muslims’ new year of lunar calendar.

According to analysts Hezbollah’s legitimacy in the Arab world and specially in Lebanon has taken a serious hit due to its involvement in the Syrian civil war. Nasrallah hopes that the threats he serves to Israel can fix Hezbollah’s image . Ever since the 2006 war Hezbollah has not engaged in any resistance activity . Its primary focus has been enhancing Iran’s role in the Arab world at the expense of Lebanon’s relations with its Arab neighbors . Over 1500 of its fighters were killed in Syria defending its dictator Bashar al Assad. Several Arab countries have labeled Hezbollah as a terrorist organization