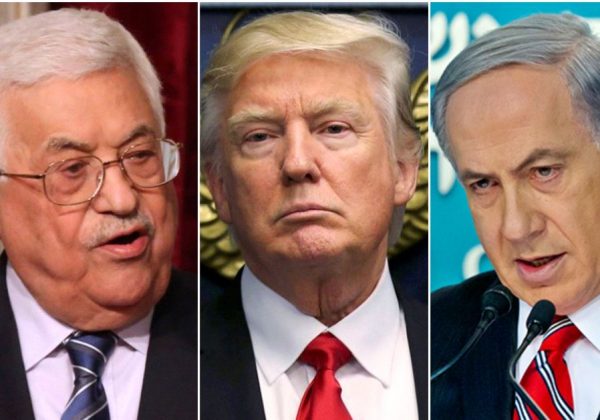 This week, on the sidelines of the United Nations General Assembly, President Trump will meet with Israeli Prime Minister Benjamin Netanyahu and Palestinian Authority President Mahmoud Abbas to discuss the next steps in the Trump administration’s effort to forge a peace deal.

No one is holding his breath. Many in the pro-peace community gave up hope for Trump’s success in February, when he said of the peace process, “I am looking at two-state and one-state, and I like the one that both parties like.”

I, too, guffawed then. As a former soldier in the Israel Defense Forces, I was dumbfounded by Trump’s seeming lack of understanding of the conflict. And as the former director of an organization advocating for the peace process, I have devoted much of my career to the two-state solution. But I had to admit anyway that Trump was right: He should not begin his foray into peacemaking by aiming to achieve a two-state solution.

Since the Oslo accords in the mid-1990s, U.S.-sponsored peace talks have always sought to solve everything or nothing. The Israelis and Palestinians were to agree on borders, refugees, the status of Jerusalem, the fate of the settlements and security as a package deal. Needless to say, this model has never succeeded in resolving the conflict.

During my time working at Partners for Progressive Israel, a pro-peace nonprofit group based in New York, I eagerly supported the latest iteration of final-status peace talks under President Barack Obama. Even while I was cognizant of Netanyahu’s disingenuousness in joining peace talks with the Palestinians in 2013, my organization and I publicly supported the negotiations.

We should have acknowledged what we already knew: Netanyahu has always opposed Palestinian statehood. He first rose to power as the antithesis to the Israeli peace movement in the 1990s. Each of his governments since has strengthened settlements, deepened the occupation and interpreted the Palestinian national movement as permanently and irrefutably at odds with Israel’s existence.

No matter what Trump thinks he can accomplish that his predecessors could not, the problem is not only in Washington. Seeking a two-state solution while Netanyahu is prime minister is pointless. Time and again, his government elects for settlements that put Israelis in danger at the expense of a potential peace agreement dependent on Palestinian statehood. In 2011 and 2012, when I was a soldier stationed in the West Bank, I saw these security threats firsthand. In one particularly gruesome incident, Palestinian terrorists broke into a home in the settlement of Itamar and massacred an entire family. This July, a similar attack claimed the lives of three Israeli civilians in the settlement of Halamish. Netanyahu’s government encourages settlement expansion despite these threats, helping to propel the growth of the settler population to twice the rate of the rest of the country and expanding into what little land is available for a Palestinian state.

The Palestinians, for their part, no longer have a government in place that can handle the creation of a state. Abbas has been serving long past the legal end of his presidency, and Palestinian political representation is split between the Palestinian Authority in the West Bank and Hamas in Gaza. Netanyahu’s government jumps at any opportunity to blame Abbas for violence, undermining his international legitimacy, while Abbas’s cooperation with Israel despite ceaseless settlement expansion undermines his legitimacy at home. Besides that, the Israeli occupation makes Palestinian preparation for independent statehood impossible.

Instead of seeking a final status agreement, Trump should devote efforts toward smaller, more measurable gains. He should work to strengthen shared economic, environmental and public health goals between Israel and the Palestinian Authority. These smaller-scale agreements would create value in cooperation and would bind the fate of both peoples. They would work against the occupation by chipping away at the bureaucratic stranglehold that partially defines it. They would strengthen Palestinian leaders.

There are several fledgling examples of these shared-outcome projects underway, such as the Red Sea-Dead Sea Water Conveyance Project, a cooperative venture between Israel, Jordan and the Palestinian Authority that aims to replenish the dangerously dry Dead Sea by connecting it to the Red Sea.

The health-care sector is another area that fosters Israeli-Palestinian cooperation. Health-care workers in Israel represent every ethnic group in the country, and they work together remarkably well. In 2008, USAID sponsored the Palestinian/Israeli Health Initiative, discussions between Israeli and Palestinian medical professionals and academics that explored using public health projects to build working relationships between Israelis and Palestinians. The group outlined several projects that would provide necessary health care while also building trust. Trump should implement their suggestions right away.

I still cannot envision a permanent peace outside the two-state model. The only way to guarantee equal rights for both peoples is each one gaining political independence. Until then, the larger issues such as borders, refugees and the status of Jerusalem will remain and may become more problematic. The settlements probably will expand. But as the Obama administration proved, allocating energy and resources to these problems might have no impact at all. It might even lead to outbreaks of worse-than-normal violence; the period immediately following the collapse of peace talks in 2014 was the bloodiest in a decade.

Negotiating toward a final status agreement rather than building a solid foundation for that outcome would be a mistake. Such grandiose pursuits without regard for the political climate have allowed the maximalists from each side to easily sabotage progress. It asks Palestinians to invest in a process that has had minimal positive impact on their daily lives, and the violence that follows failed peace talks cuts deep, lasting wounds that make peace difficult to imagine. Whatever plan the president has for the region, and whatever his ability to achieve it, smaller advances toward cooperation and mutual dependence are not only practical, they are the foundation on which permanent peace will be built.