North Korea will sell nuclear weapons to Syria and Iran under US sanctions, warns expert 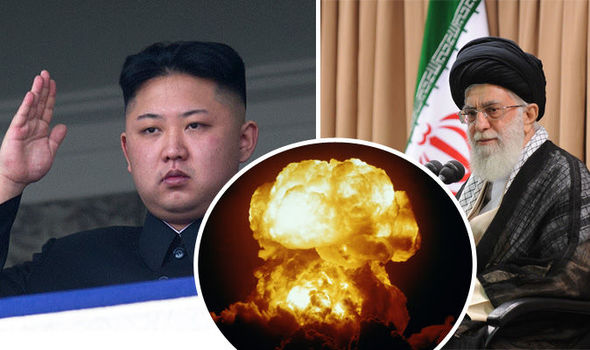 Kim Jong-Un, Ayatollah Khamenei and mushroom cloud
Share:
North Korea threatening to launch a missile attack on the US territory of Guam sparked an angry war of words between President Trump and the rogue state’s despot leader Kim Jong-un.

Having promised to react with “fire and fury” to any such threat, Mr Trump has placed his fifth, and largest, set of sanctions on Chinese and Russian individuals and firms that his administration say conduct business with North Korea in an attempt to isolate the Kim regime amid the World War 3 threats

The sanctions against 10 companies and six individuals are designed to disrupt the economic ties that have allowed Pyongyang to continue to fund its nuclear weapons programme, which is under United Nations restrictions.

Emily Landau, a senior research fellow and head of arms control programme at the Institute for National Security Studies, warned Mr Trump’s sanctions could force North Korea to sell its weapons if it is required to raise funds.

Speaking to I23 News’ Debrief, Ms Landau said: “There’s this cooperation, and it surfaces every once in a while.

“It’s all part of the dangerous activity of North Korea as a proliferator in the sense it will sell and share technologies, know-how and components that are related to nuclear and chemical weapons programmes with anyone that pays hard cash.”

Ms Landau added Kim Jong-un will sell North Korea’s weapons to anyone “who is willing to pay the price” as the rogue state becomes harder up thanks to US sanctions.

The arms expert went as far to say the US sanctions would, in fact, fuel North Korea’s sale of arms rather than prevent it.

“If sanctions are put on North Korea then it’s in even more dire need of cash,” she said.

“Therefore it has even more of a motivation to make these kinds of deals with any state and entity which is willing to buy it.

“With North Korea it’s all about the money.”

Speaking after the fresh US sanctions, Secretary of State Rex Tillerson said the restraint shown by North Korea with its nuclear weapons programme could mean dialogue opens between Washington and Pyongyang.

He said: “We have had no missile launches or provocative acts on the part of North Korea since the unanimous adoption of the UN security council resolution.
“We hope that this is the beginning of this signal that we’ve been looking for – that they are ready to restrain their level of tensions, they’re ready to restrain their provocative acts, and that perhaps we are seeing our pathway to some time in the near future having some dialogue.”