How Steve Bannon Lost the Battle for the Soul of Trumpism 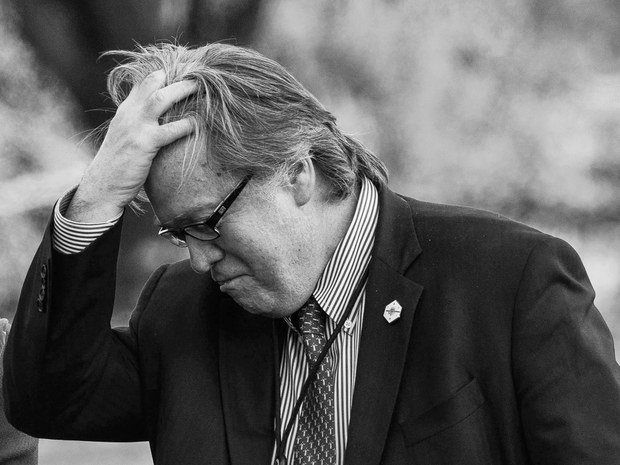 Throughout the summer, six men—four members of Congress and two Trump officials—have been meeting in secret to rewrite the American tax code. The private sessions happen every two weeks or so—there’s no set schedule—often in the suite of either Paul Ryan, the Speaker of the House, or Mitch McConnell, the Senate Majority Leader. Over time, the group has become known in Washington as the “Big Six.” The goal of the group, which includes Ryan, McConnell, Trump’s top economic adviser Gary Cohn, Treasury Secretary Steve Mnuchin, and the top Republicans on the House and Senate tax-writing committees, is to avoid repeating the mistakes of the recent health-care debacle, when the House, the Senate, and the White House all had competing ideas for a bill. “We are all committed to having a bill that the six of us sign onto,” a member of the group, who asked not to be named, recently told me. “There’s going to be one tax bill and one tax bill only.”

The outlines of the bill are still skeletal, but from what Republicans across the spectrum have said it will include one key feature: a drop in all tax rates, including for the wealthiest Americans. Indeed, Donald Trump himself often calls the nonexistent bill his “tax cut” plan, rather than “tax reform.”

When Steve Bannon was ejected from the White House, last week, he cited his frustrations with the coming tax bill as one of the reasons he believed that the Trump nationalist agenda had been hijacked by the so-called globalists, such as Cohn and the other members of the Big Six.

“The Republican establishment has no interest in Trump’s success on this,” Bannon told the Weekly Standard. “They’re not populists, they’re not nationalists, they had no interest in his program. Zero. It was a halfhearted attempt at Obamacare reform, it was no interest really on the infrastructure—they’ll do a very standard Republican version of taxes.” He added, “On what element of Trump’s program, besides tax cuts—which is going to be the standard marginal tax cut—where have they rallied to Trump’s cause? They haven’t.”

Bannon was always more invested in remaking the Republican Party than he was in Trump himself. On the issue of taxes, more than any other, he never made a dent. His defeat on tax reform at the hands of Cohn and the members of the Big Six helps explain why the nationalist economic agenda never had a chance in the modern G.O.P.

In the Bannon-era, factionalized Trump White House, Cohn was not just the head of the National Economic Council but the leader of the group of officials whom Bannon derided as “New York.” (Breitbart stories called Cohn and his companions at the N.E.C. “Globalist Swampsters.”) If the Trump White House were “Lord of the Flies,” Cohn would be Ralph, the pragmatist who tries to maintain a sense of normalcy and assert leadership over his fellow castaways as they descend into chaos and divide into tribes. Cohn, who is fifty-six, was brought into the Administration by Jared Kushner, the President’s son-in-law, who once interned for Cohn, a longtime donor to Democratic candidates.

The Cohn-Bannon battle pitted “the center-right pragmatists versus the illiberal populists,” Congressman Charlie Dent said. Dent is the leader of the Tuesday Group, a caucus of moderate House Republicans who have become increasingly vocal in response to tactics from their ideological rivals in the Freedom Caucus, which allied itself with Bannon. A senior White House official offered a slightly different take on this divide. “The simplistic way it’s played is ‘it’s Bannon and the crazies,’ ” the official told me earlier this year. “ ‘They’re crazy and Trump loves his crazies.’ And then you’ve got the adult supervision talking everybody off the ledge: Mnuchin and Gary and these guys.”

After some early victories, the crazies began to lose more and more battles, especially as the pragmatists expanded their ranks through the bureaucracy and Trump’s agenda moved to Capitol Hill, where Bannon had little influence.

Take the debate over the North American Free Trade Agreement. At campaign rallies last year, Trump repeatedly said that nafta was the “worst trade deal in the history of the world,” and Bannon believed that attacking nafta was central to Trump’s success in flipping Michigan, Wisconsin, and Pennsylvania, three states where manufacturing jobs have steadily declined and that hadn’t been won by a Republican Presidential candidate since the nineteen-eighties. Ever since the transition, Bannon had plotted a strategy for Trump to pull out of nafta. He planned for Trump to make the announcement in Harrisburg, Pennsylvania, on April 29th, after a daytime visit to a local factory that has been operating since 1774. Trump would pull out of nafta on the same night as the White House Correspondents’ Dinner, which Trump declined to attend. “You swells were walking up on the carpet with your tuxedos, and we would be with the people,” the senior White House official said. “And, of course, that leaked out the next day, and it was like a feeding frenzy of guys with their heads blowing up.”

One of the guys who opposed the plan was Jared Kushner, who helped facilitate calls to Trump from the heads of state of Canada and Mexico, which led the President to agree to renegotiate the deal rather than pull out. Kushner’s influence, as well as Cohn’s, eventually overwhelmed Bannon.

The source of Bannon’s power was largely political. He devised for Trump the public spectacles, such as the aborted nafta announcement, that kept Trump’s base excited and engaged. But Bannon didn’t have a policy staff, had few reliable ideological allies in Congress, and was rarely interested in policy ideas that didn’t connect with the base on some emotional level.

By comparison, the source of Cohn’s power in the White House was and is structural. As the director of the N.E.C., he oversaw a White House office that Bill Clinton created in 1993 to treat economic policy with the same level of staff support and rigor as foreign policy was given by the National Security Council. When Cohn agreed to come work for Trump, he made Trump promise him that all economic policy would run through him, according to another senior White House official. “The N.E.C. is an organization that is all new,” the official said. “There are no career people in the N.E.C.” The official pointed out the broad range of issues under Cohn’s purview: “Taxes, financial regulation, financial policy, financial reform, energy—both global energy, domestic energy—environment, trade, health care, agricultural, tech, telecom, cyber. So anything that really affects the U.S. economy and is going to have impact on economic growth, job creation, trade, global relationships, runs through the N.E.C.”

Outside the White House, Bannon’s media allies discovered how outmatched he was in terms of internal resources. “The National Economic Council has become a globalist juggernaut inside the White House that is working to undermine the economic nationalist agenda for which President Donald Trump was elected,” a recent report on Breitbart said. While Cohn was at the G-20 summit in Germany with Trump, Bannon was in his White House office.

“I don’t see the Party having changed all that much,” Henry Olsen, a conservative analyst at the Ethics and Public Policy Center who has long advised the G.O.P. to adopt more worker-friendly and less economically libertarian policies, told me recently. “They seem unaware the reason they got the White House is because of people who tend not to be Republicans, and seem to be doing little, if anything, to bring those people into the tent, to keep them, and make them rethink their personal positions.” Olsen pointed to tax reform as a perfect example, noting that what Trump has announced so far does “very little, if anything, in the way of concrete tax relief” for his core voters. Bannon might take up this fight from his new perch at Breitbart, but, as he suggested to the Weekly Standard, he lost the war for the soul of Trumpism.