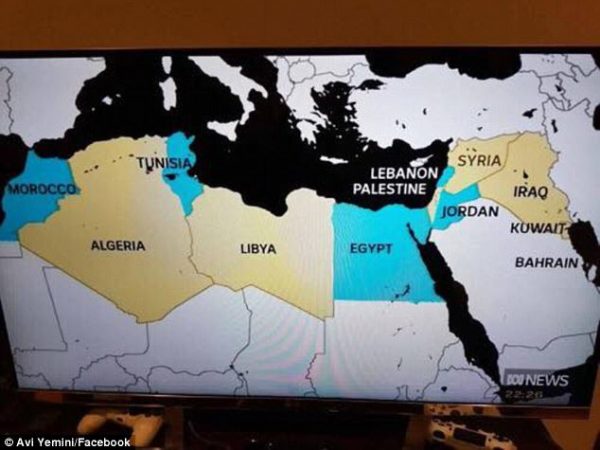 The ABC has refuted a Jewish leader’s claims it ran a story which intentionally didn’t include Israel.

The image of the map aired on ABC News on Thursday night and labeled all surrounding countries but excluded Israel.

Australian Jewish leader Avi Yemini spotted Israel was missing and claimed the nation had deliberately been left off the map.

But ABC News Australia has now denied the accusation and said the graphic showed countries where laws allowing rapists to escape punishment if they married their victim had either been repealed or where campaigners were working to get the laws abolished.

On Sunday an ABC News Australia spokeswoman explained that the story was about the repealing of a law in Lebanon that allowed rapists to escape punishment if they married their victims.

‘Our understanding is that this law does not exist in Israel, and never has, so it was not shown on the map.’

Mr Yemini, however, claims the exclusion was to ‘appeal to the Jew-hating crowd,’ he told Daily Mail Australia.

In a post on Facebook the Israeli activist uploaded a photo of the map as it appeared on television screens.

‘Last night ABC wiped Israel off their map. They’re literally doing the Islamists dirty work for them,’ he wrote to his near 80,000 followers.

In just over 24 hours the post gathered more than 800 reactions and was commented on by almost 100 people.

Mr Yemini told Daily Mail there is no place in Australian society ‘to question or deny Israel’s right to exist.’

The pro-Israel figure believes it was a deliberate act to suit the ABC’s current viewers and a ploy to attract more.

‘The time has come for the ABC to stop its constant attacks on one of our closest allies and the only real democracy in the Middle East, Israel.

‘This is yet another great example of why we should defund the ABC immediately,’ he said.