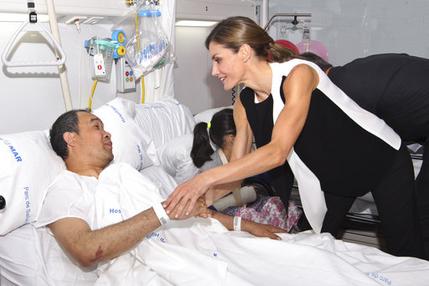 Spain’s Princess Letizia speaks with one of the victims of the van attacks at a hospital in Barcelona , Spain, Saturday, Aug. 19, 2017. Police on Friday shot and killed five people carrying bomb belts who were connected to the Barcelona van attack, as the manhunt intensified for the perpetrators of Europe’s latest rampage claimed by the Islamic State group. (Spanish Royal Palace, Pool Photo via AP)
Share:

BARCELONA, Spain (AP) — Authorities in Spain and France pressed the search Saturday for the supposed ringleader of an Islamic extremist cell that carried out vehicle attacks in Barcelona and a seaside resort, as the investigation focused on links among the Moroccan members and the house where they plotted the carnage.

Catalan police said the manhunt was centered on Younes Abouyaaquoub, a 22-year-old Moroccan suspected of being the driver of the van that plowed into a promenade packed with pedestrians in Barcelona on Thursday, killing 13 and injuring 120.

Even with Abouyaaquoub still at large, Spanish Interior Minister Juan Ignacio Zoido declared the terrorist cell responsible for the carnage had been effectively “broken” after five members were killed by police in a shootout, four were in custody and as many as two were killed in an explosion earlier in the week. He said there was no new imminent threat of attack.

Early Saturday, police searched two buses in northwest Catalonia. Nothing was found in the searches in Girona and Garrigas, police tweeted.

Across the Pyrenees, French police carried out extra border checks on people coming from Spain – a routine beefing-up of patrols anytime a neighboring country flags a potential risk, a French security official said, speaking on condition of anonymity. No arrests were made.

Police also announced a series of controlled explosions Saturday in the town of Alcanar, south of Barcelona, where the attacks were planned in a rental house destroyed Wednesday by an apparently accidental blast. Authorities had initially written off the incident as a household gas accident, but took another look on Friday and returned on Saturday.

Initially, only one person was believed killed in the blast. But police said tests were underway to determine if human remains found at the house on Friday were from a second victim.

The Islamic State group initially claimed responsibility for the Barcelona attack. In a new statement Saturday, it also claimed the attack a few hours later in Cambrils, in which five extremists mowed down people along the boardwalk in the seaside resort.

One woman died and five others were injured in Cambrils before police shot and killed all five attackers. They were armed with an axe, knives and fake explosive belts. The Islamic State statement provided no information beyond what had been previously reported.

Authorities said the two attacks were related and the work of a large terrorist cell that had been plotting for a long time from the house in Alcanar, 200 kilometers (125 miles) down the coast from Barcelona.

The name of the lone suspect at large, Abouyaaquoub, figures on a police list of four main suspects sought in the attacks. All the suspects on the list hail from Ripoll, a quiet, upscale town of 10,000 about 100 kilometers north of Barcelona.

The suspect list was issued throughout Spain and into France, according to a Spanish official and a French police official, who spoke on condition of anonymity to discuss the document.

The French official said Spain had flagged a rented Kangoo utility vehicle that was believed to have been rented in Spain by a suspect in Thursday’s attacks that might have crossed the border.

Also named on the list is 17-year-old Moussa Oukabir, whose brother Driss reported his documents stolen to police in Ripoll. Ripoll’s mayor confirmed the documents were found in one of the vehicles used in the attacks.

The brothers were born and raised in Ripoll, where the family’s first-floor apartment was searched Friday. No one was home.

Neighbors said they were shocked by the news of Moussa Oukabir’s alleged involvement. One teenager, who identified himself only by his first name, Pau, said they played together when they were younger and he was “a good boy.”

In addition to the five people killed in Cambrils, police said they arrested two people Friday, after the two arrests a day earlier. In custody are three Moroccans and one Spaniard, none with terrorism-related records.

“We are not talking about a group of one or two people, but rather a numerous group,” regional Interior Ministry chief Joaquim Forn told Onda Cero radio.

The sheer size of the cell recalled the November 2015 attacks in Paris, in which trained Islamic State attackers struck the national stadium, a concert hall and bars and restaurants nearly simultaneously. Since then, the extremist group has steadily lost ground in its self-declared caliphate in Iraq and Syria, most recently with its defeat in Mosul.

“This shows there is no correlation between what is happening over there with Daesh and the operational capacity of the group,” said Jean-Charles Brisard, a French security analyst, using another name for the group.

Spanish authorities had not yet drawn any direct links between IS extremists and the suspects in the Spanish attacks, but the possibility that members of the Spanish group could still be at large was chilling. Those who have survived prior attacks nearly always ended their lives with new bloodshed and a hail of police bullets.

“There is the danger they will not let themselves get caught and will do something dramatic,” said Alain Chouet, a former French intelligence official.

The attacks unnerved a country that hasn’t seen an Islamic extremist attack since 2004, when al-Qaida-inspired bombers killed 191 people in coordinated assaults on Madrid’s commuter trains. Unlike France, Britain, Sweden and Germany, Spain has largely been spared, thanks in part to a crackdown that has netted about 200 suspected jihadis in recent years.

Islamic extremists have targeted Europe’s major tourist attractions in recent years. Rented or hijacked vehicles have formed the backbone of a strategy to attack the West and its cultural symbols. Barcelona’s Las Ramblas is one of the most popular attractions in a city that swarms with foreign tourists in August.

The dead and wounded in the two attacks came from 34 countries.