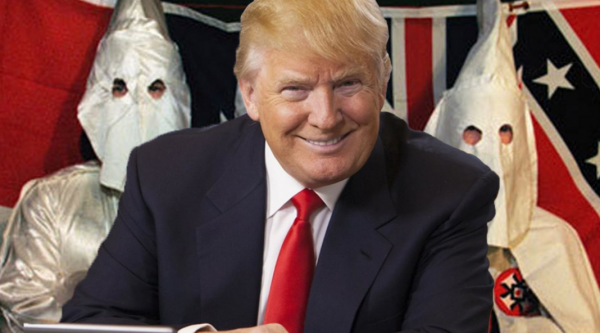 Donald Trump was endorsed for President of the United States by the KKKK’s official news paper “The Crusade” in October 2016 KKK’s . “The Crusade” has praised the GOP nominee saying: ““Make America Great Again!” It is a slogan that has been repeatedly used by Donald Trump in his campaign for the presidency. You can see it on the shirts, buttons, posters and ball caps such as the one being worn here by Trump speaking at a recent rally…. But can it happen? Can America really be great again? This is what we will soon find out! While Trump wants to make America great again, we have to ask ourselves, ‘What made America great in the first place?’ The short answer to that is simple. America was great not because of what our forefathers did — but because of who are forefathers were, America was founded as a White Christian Republic. And as a White Christian Republic it became great.”
Share:

By Carla Herreria
President Donald Trump had a chance to explicitly denounce white supremacy and racism on Saturday after violence broke out at a white nationalist rally in Charlottesville, Virginia, leaving three dead ― one 32-year-old woman, who was struck by a car, and two state troopers, whose helicopter crashed outside the city while they were responding to the situation ― and at least 35 others injured.

But instead of specifically criticizing members of the Ku Klux Klan, the white supremacists or the neo-Nazis who brought torches and bats to the rally, Trump blamed the unrest on “many sides.”

In fact, Trump commented on the fighting in Charlottesville several times on Saturday ― on Twitter and in front of the press ― but none of his remarks named the violence for what it was: a fight over white supremacy.

So people did it for him.

There. Just copy & paste this, @POTUS. That’s all we need from you right.

Celebrities, citizens and politicians from both sides of the aisle slammed Trump for failing to condemn the obvious and dropping the ball on moral leadership.

Mr. President – we must call evil by its name. These were white supremacists and this was domestic terrorism. https://t.co/PaPNiPPAoW

No, Mr. President. This is a provocative effort by Neo-Nazis to foment racism and hatred and create violence. Call it out for what it is. https://t.co/WibPqkLsLa

Repeat after me, @realDonaldTrump: white supremacy is an affront to American values. #Charlottesville

The white supremacists and their bigotry do not represent our great country. All Americans should condemn this vile hatred. #Charlottesville

The views fueling the spectacle in Charlottesville are repugnant. Let it only serve to unite Americans against this kind of vile bigotry.