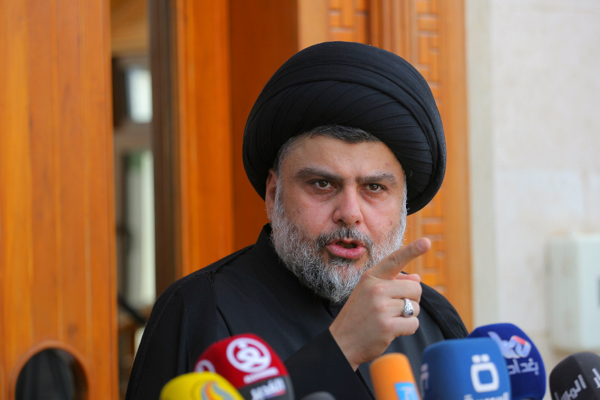 Baghdad – Iraqi Shia cleric and politician Muqtada al-Sadr is heading to United Arab Emirates on Sunday having received an official invitation for a visit, his office said.

A private plan was sent to fly the once firebrand politician to the Gulf country, said the statement.

The announced visit will possibly stir more debates among observers about Sadr’s unusual diplomatic activity as he came back recently from Saudi Arabia, the arch regional rival of Iran, presumably the biggest patron of Shia political elites and political movements in the Middle East.

UAE is a close Saudi Arabia ally and an opponent to Iran’s regional politics.

The statement gave no further details of the program of the visit.

Sadr visited Saudi Arabia for the first time in 11 years on July 30th, met with Crown Prince Mohammed bin Salman and discussed regional issues of common interest. While political commentators viewed the visit as a remarkable attempt to break away with the Iran-dominated Iraqi politics, others saw it as a balancing political act designed to get advantage from Sunni Saudi Arabia’s regional weight while staying on good terms with Shia Iran. Some also say it is an attempt by Sadr to embolden his image as a nationalist figure whose orientations can transcend sectarian calculations.

The UAE and Saudi Arabia visits come after apparent rapprochements between Baghdad and Sunni-ruled governments in the region. Besides Sadr, Iraqi Prime Minister Haider al-Abadi visited Riyadh in June, and was followed by Iraqi Interior Minister Qassem al-Araji a month later. In February,  Saudi foreign minister Adel al-Jubeir visited Iraq, where he voiced support for Iraq against terrorism.