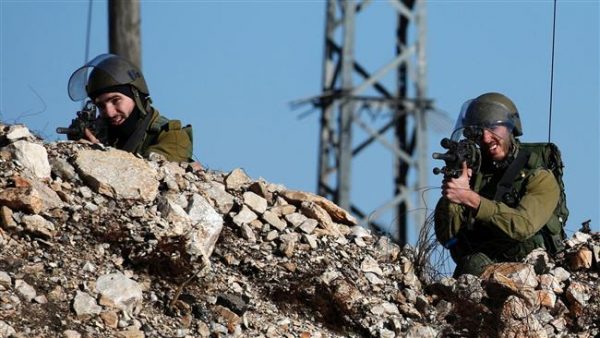 Israeli military forces aim their weapons towards Palestinian protesters during clashes in the village of Kfar Qaddum, near Nablus, in the occupied West Bank on January 6, 2017. (Photo by AFP)
Share:

The United Nations Secretary-General Antonio Guterres said he “deeply deplores” the killings of three Palestinians – one of whom was shot by a settler – as anger boiled over increased Israeli restrictions at Jerusalem’s al-Aqsa compound.

Guterres condemned the killings and called for an investigation early on Saturday, hours after mass protests by Palestinians around the holy site turned deadly.

He urged Israeli and Palestinian leaders to refrain from actions that could further escalate the volatile situation in Jerusalem’s Old City, saying that religious sites should be spaces for reflection, not violence.

Citing Guterres, UN deputy spokesman Farhan Haq said the organisation understands “legitimate security concerns, but on the other hand it is important that the status quo at the site be retained”.

Israeli security forces violently clamped down on Friday’s demonstrations, firing live ammunition, tear gas and rubber-coated bullets at crowds of Palestinians protesting against the new measures, which include the barring of Muslim men under the age of 50 from the holy site and the installation of metal detectors.

Israel tightened its grip on the compound on July 14 after two Israeli security officers were killed in an alleged attack by three Palestinians, who were themselves killed by Israeli police following the violence.

A second Palestinian, 20-year-old Muhamad Hasan Abu Ghanam, was killed by live fire during the demonstrations in Jerusalem.

According to the Red Crescent, there were 450 wounded by Israeli forces during the protests in Jerusalem and the West Bank, with at least 215 injuries caused by tear gas inhalation.

The Palestinian Prisoners Club said that at least 21 Palestinians were arrested at Friday’s protests in the West Bank, including at least 10 from Jerusalem.

Israeli media reported that four Israeli police officers were injured during the protests after Palestinians threw rocks and flares at them.

Palestinians view the Israeli measures at al-Aqsa as collective punishment for the July 14 incident and an infringement on the status quo, which gives Muslims religious control over the compound and Jews the right to visit, but not pray there.

‘Excessive use of force’

In a statement released on Friday night, Egypt’s foreign ministry called upon the Israeli government to be rational and not “let the situation get into a dangerous swamp” that endangers attempts to revive peace talks.

The statement condemned Israel for the civilian deaths and what it described as an “excessive use of force”.

Egypt warned that Israel was in danger of “fuelling tension among the Palestinian people and the entire Muslim nation” by restricting religious freedom.

“I cannot end this speech without expressing solidarity with the brotherly Palestinian people, especially our people in Al Quds [Jerusalem], and denouncing the closure of the al-Aqsa Mosque,” he said.

“[I hope] that what is happening in Al Quds [can] be an incentive for unity and solidarity instead of division.”

Palestinian President Mahmoud Abbas announced the suspension of all contact with Israel “until it cancels its measures at al-Aqsa Mosque and preserves the status quo”.

But Abbas’ statement could set off “a standoff that is even more difficult to bridge in the short-term”, Fawcett said.