An outpouring of support for Sen. John McCain from across the political spectrum 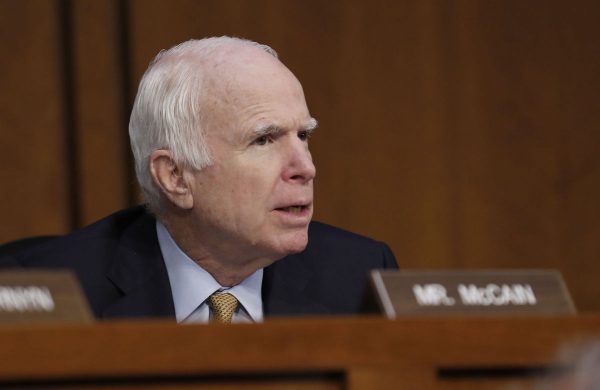 Sen. John McCain, who has been diagnosed with an aggressive form of brain cancer, has received an outpouring of support from current and former lawmakers from across the political spectrum.

The 80-year-old Arizona Republican underwent a procedure last Friday to remove a blood clot above his left eye at the Mayo Clinic Hospital in Phoenix. His office said that the pathology reports revealed “a primary brain tumor known as a glioblastoma.”

John McCain is an American hero & one of the bravest fighters I've ever known. Cancer doesn't know what it's up against. Give it hell, John.

After his diagnosis was publicly disclosed Wednesday night, President Trump said in a statement, “Senator John McCain has always been a fighter. Melania and I send our thoughts and prayers to Senator McCain, Cindy, and their entire family. Get well soon.”

Former President Obama tweeted that McCain should “give it hell.”