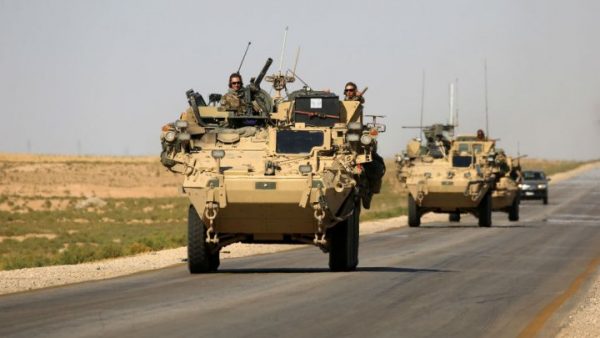 US troops on patrol near the northern Syrian village of Ain Issa on June 3, 2017.
Share:
Turkey’s state news agency on Tuesday published the locations of secret US military bases in Syria as well as details on the numbers of US and French troops stationed there, sparking the ire of fellow NATO member states.

In the latest display of tensions between Turkey and other NATO member nations, Turkey’s state-run Anadolu news agency earlier this week published a detailed report of the secret locations of US military bases, operational posts and military posts inside Syria. The 620-word news report also included the numbers of US soldiers and French special forces stationed at these locations.

“It certainly was intentional. Anadolu agency is the hand-servant of the [Turkish] government. It would not have published this report without the green light from the top of government,” explained Mortimer, reporting from Ankara, adding that the revelation of troop numbers was particularly serious. “War correspondents do not give the number of troops in the unit to which they are attached. That is seen as giving information to the enemy. But here, Anadolu agency appears to have done exactly that.”

The report, “US increases military posts supporting PKK/PYD in Syria,” lists US positions in Kurdish administered area of northern Syria and is the latest display of Ankara’s ire over Washington’s support for the PYD (Democratic Union Party), which Turkey views as the Syrian affiliate of the proscribed Turkish PKK (Kurdistan Workers’ Party).

The PYD is the political umbrella of the YPG (People’s Protection Units) which part of the US-led military operations against the Islamic State (IS) group in the region.

“Turkey sees the YPG as an affiliate of the PKK and Turkey has long called on Washington to withdraw support for them. But there’s a difference between calling on America to withdraw support and actually advertising the details of that support,” said Mortimer.

The US denies working with Kurdish separatists and maintains the YPG is part of the SDF (Syrian Democratic Forces), which includes a large component of Arab troops.

French special forces on the ground


The leaked details of US positions inside Syria include three US military posts in the northern Syrian province of Raqqa, home to the IS group’s de facto capital.

Operational capacities of the locations, including bases that are large enough for military helicopters and cargo planes are also detailed, as well as weapons arsenal that include artillery batteries, rocket launchers and armored vehicles.

The report sparked strong condemnations from the US Defense and State Departments on Wednesday, with the Pentagon warning that the leaks could put lives at risk.

“The release of sensitive military information exposes coalition forces to unnecessary risk and has the potential to disrupt ongoing operations to defeat ISIS,” Pentagon spokesman Eric Pahon told reporters on Wednesday, using another acronym for the IS group.

French officials have not yet responded to the Turkish news report. When contacted by FRANCE 24, a French foreign ministry press officer said an official statement was not expected on Thursday.

The latest Anadolu report marks another step in the deterioration of US-Turkey relations, with Ankara accusing Washington of failing to expedite the extradition of Pennsylvania-based Turkish cleric, Fethullah Gulen. Ankara blames Gulen for masterminding the July 15, 2016 coup attempt, a charge Gulen denies.

Tensions have also been simmering between Turkish military and NATO officials based in Brussels. Turkey is NATO’s only Muslim-majority member with the alliance’s second-largest standing army. In December 2016, NATO’s top commander, Gen. Curtis Scaparrotti warned of a “degradation” of the alliance’s command operations following Turkey’s dismissal of “talented, capable” senior Turkish military officials in massive purges after the July 2016 coup attempt.