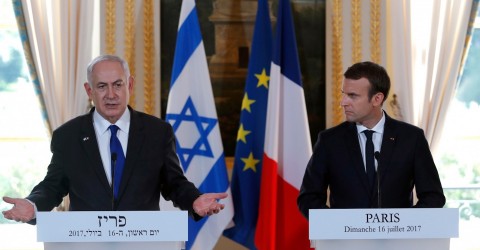 French President Emmanuel Macron is shown with Israeli Prime Minister Benjamin Netanyahu during a ceremony commemorating the 75th anniversary of the Vel d’Hiv roundup in Paris on July 16, 2017
Share:

French president Emmanuel Macron on Sunday condemned anti-Zionism as a new form of anti-Semitism, in what observers said was an unprecedented statement from the leader of France in support of zionism and  Jewish state.

“We will never surrender to the messages of hate; we will not surrender to anti-Zionism because it is a reinvention of anti-Semitism,” Macron said during  an event in Paris marking the  deportation of French Jews during World War II. He was directly addressing Prime Minister Benjamin Netanyahu, who attended the event.

During a lengthy and introspective speech commemorating the 75th anniversary of the Vel d’Hiv roundup, a mass arrest of 13,152 French Jews in July 1942 that was part of the Nazi effort to eradicate the Jews of France, Macron forcefully denounced Holocaust denial and anti-Semitism.

Like several of his predecessors, Macron accepted France’s responsibility for the deportations, admitting that the Vichy regime actively organized them. “It is indeed France that organized” the roundup, Macron said. “Not a single German” took part, he added.

“Time does its work,” the president said. “Archives open (and) the truth comes out. It’s stark, irrevocable. It imposes itself on us all.”

In 1995, then-president Jacques Chirac was the first French leader to admit his nation was guilty of having assisted in the mass murder of Jews.

Fewer than 100 of those who were detained at the so-called Vel d’Hiv and then sent to the Nazi death camps survived.

In a clear reference to far-right leader Marine Le Pen, the rival he defeated in May, Macron denounced “politicians who are prepared to reverse the truth.”

Le Pen had insisted during the campaign that today’s France could not be held accountable for the Vichy regime’s actions.

Netanyahu was the first Israeli leader to speak at the annual event in memory of the Vel d’Hiv roundup, which led to criticism by some leftist Jewish French groups, who argued that this event had nothing to do with Israel.

During his speech, delivered partially in French but mostly in English, Netanyahu hailed French citizens who protected Jews during World War II and vowed never to let Holocaust be repeated.

“Seventy-five years ago, a heavy darkness descended on this City of Lights,” he said adding that the Nazis and their collaborators in France “shattered the lives of thousands of French Jews at Vel’ d’Hiv.”

But he praised “Chirac and successive presidents” who deserved “much credit for telling the truth.”

During the Holocaust, the values of the French Revolution – liberty, equality and fraternity – were brutally crushed “under the boot of anti-Semitism,” he went on. “Yet we must say, and we heard it today as well, we must say that not all was dark.”

Netanyahu then saluted “the noble French citizens” who risked their lives to rescue fellow Frenchmen, such as the residents of Chambon-sur-Lignon who saved thousands of Jews.

“This is a special heroism. We have known in Israel a lot of heroism, as have you here in France. This is different heroism,” Netanyahu said. “There is heroism in battle, in pitting one’s life to save others. But the heroism of the people who saved Jews involved putting their families at risk, putting their children, their wives, their husbands, at the risk of execution… We will never forget, never, these great, great human beings.”

After the Holocaust, the State of Israel was established to guarantee that the Jewish people will never undergo a Holocaust again, Netanyahu said. “Never again. We will never let it happen again.”

Turning to the present, the prime minister spoke about a “war of civilization” between radical Islam and the West. “Militant Islam wants to destroy our common civilization. The militant Shiites led by Iran, the militant Sunnis led by ISIS – both seek to vanquish us,” he declared.

In the jihadists’ view Israel is merely the first Western target that stands in the way of their goal, he added. “Militant Islamists do not hate the West because of Israel. To the contrary, they hate Israel because of the West, because they rightly see in Israel a forward bastion of our common values of freedom, humanism, democracy. They try to destroy us, but also they try to destroy you.”

Netanyahu, who spoke ahead of Macron, praised the new president for condemning anti-Semitism and “this larger militancy that seeks to destroy our world.”

After the ceremony, Netanyahu and Macron headed to the Elysee palace for their first formal working meeting.