Maryam Mirzakhani a math genius dies from cancer at 40 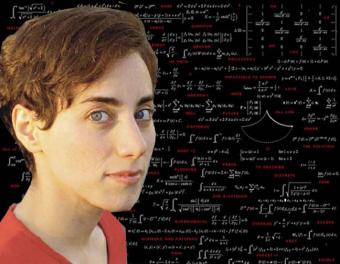 Iran -born Maryam Mirzakhani was first woman to win Fields Medal. Her work on curved spaces will have an enduring impact on science, says Manjul Bhargava who won Fields Medal with her in 2014.

“She was a master of curved spaces,” said Manjul Bhargava about celebrated fellow mathematician Maryam Mirzakhani, who died on Saturday at age 40 after a battle with breast cancer. Bhargava and Iranian national Mirzakhani won the Fields Medal, the topmost international prize in mathematics, often described as the Mathematics Nobel, together in 2014.

Mirzakhani, who grew up in the war-torn Iran of the 1980s, was the first — and so far the only — woman to win the Fields Medal, which, since 1936, has been awarded to up to four mathematicians under the age of 40 every four years.

“Everyone knows that the shortest distance between two points on a flat surface is a straight line. But if the surface is curved — for example, the surface of a ball or a doughnut — then the shortest distance (along the surface) between two points will be along a curved path, and can thus be more complicated. Maryam proved many amazing theorems about such shortest paths — called ‘geodesics’ — on curved surfaces. Her work, and the research programmes she started, will have an impact on mathematics and physics for years to come,” Bhargava, mathematics professor at Princeton University, said in an email sent to The Sunday Express.

Bhargava said he was “devastated” to hear the news of Mirzakhani’s death. “She was just a wonderful person — so humble, brilliant, creative, private, caring. We overlapped at Harvard University early in our careers, and became instant friends then. I still remember the nice times, when she and I and a handful of others would be the last remaining mathematicians working late at night in the mathematics department. Although we didn’t work in the same area, we shared a love of mathematics and always supported each other and enthusiastically followed each other’s work. We never imagined at that time, 15 years ago, that we would one day together receive Fields Medals. It was indeed a great honour for me to receive it together with her,” he said.

Mirzakhani is survived by her husband, mathematician Jan Vondrak, and daughter Anahita.

Mirzakhani, who was a professor of mathematics at Stanford University in the United States, broke new grounds in the study of complex curved or closed surfaces, referred to as Riemann surfaces. One of the simplest examples of such structures is the doughnut, which is a circular surface with a hole in between, or a pretzel, which is like two doughnuts attached side by side. The geometry on such, and much more complex curved structures, is very different from the more familiar two and three-dimensional geometry on flat surfaces.

“Her PhD thesis on the geometry of such surfaces was one of the most remarkable in this area of mathematics in several decades. She came up with three major results, all of them making a fundamental breakthrough in our understanding of these kind of geometries that mathematicians and physicists deal with on a regular basis,” Mahan Mj of the School of Mathematics at the Tata Institute of Fundamental Research in Mumbai told The Indian Express.

For all her brilliance in mathematics, Mirzakhani wanted to become a writer when she was a child. In one of her interviews following the Fields Medal, she said her most exciting pastime used to be reading novels. “I never thought I would pursue mathematics until my last year in high school… My older brother was the person who got me interested in science in general. He used to tell me what he learned in school. My first memory of mathematics is probably the time that he told me about the problem of adding numbers from 1 to 100. I think he had read in a popular science journal how Gauss solved this problem. The solution was quite fascinating for me. That was the first time I enjoyed a beautiful solution, though I couldn’t find it myself,” she had said in an interview to the Guardian newspaper.

“…the most rewarding part (of doing mathematics) is the “Aha” moment, the excitement of discovery and enjoyment of understanding something new – the feeling of being on top of a hill and having a clear view. But most of the time, doing mathematics for me is like being on a long hike with no trail and no end in sight,” she was quoted as saying in that interview.

The Fields Medal in 2014 had brought global attention on Mirzakhani, who had just begun to show signs of recovery from her disease at that time. The award had triggered mixed reactions in her home country. Iranian President Hassan Rouhani, in a congratulatory message, had posted two pictures of her on his Twitter page, one in an Islamic dress with headscarf but face uncovered, and the second in which she was wearing a shirt and no headscarf. The photos had kicked a row in Iran then and Rouhani had been criticised by some for posting the photo without the Islamic hijab.

Despite the earlier recovery, the disease later spread to her bones. “She was always very private about her medical condition, so I don’t know how much she would want me to say, but the way she bravely dealt with her condition and the associated debilitating treatments, while continuing to produce consistently groundbreaking mathematics — not to mention taking care of her family and her young daughter — was truly unbelievable and inspirational. Most people around her did not even know of her condition for most of her illness,” Bhargava said.

“Mathematics takes a big hit today, and so does humanity. We will miss her deeply,” he said.