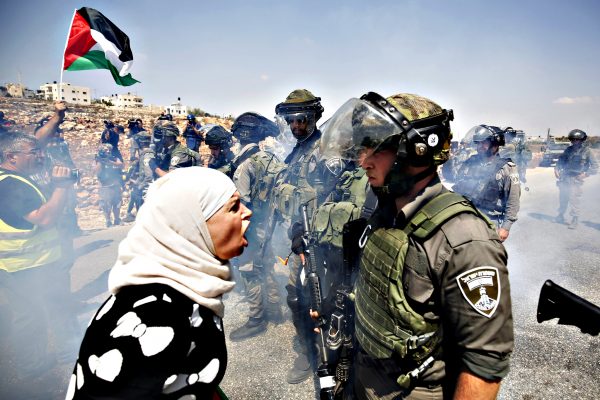 A Palestinian woman argues with an Israeli policeman during a protest against illegal Jewish settlements in the West Bank village of Nabi Saleh, near Ramallah…
Share:

Israeli forces killed a  Palestinian militant they were seeking to arrest after he shot at them in the occupied West Bank, police and the military said.

Police spokesman Micky Rosenfeld said the man was suspected of carrying out two shooting attacks in the West Bank on Saturday and opened fire at soldiers and policemen who had tracked him down.

“ThePalestinian militant was found and surrounded, he pulled out his weapons at them, and in response, he was killed,” Rosenfeld said.

The incident took place before dawn in the West Bank village of Nabi Saleh, near the city of Ramallah, and no Israeli casualties were reported. One man was lightly wounded in the Saturday shooting, the Israeli military said.

A wave of Palestinian street attacks that began in 2015 has slowed but has not stopped. At least 260 Palestinians and one Jordanian citizen have been killed since the violence began.

Israel says at least 175 of those killed were carrying out attacks while others died in clashes and protests.

Forty Israelis, two U.S. tourists and a British student have been killed in Palestinian stabbings, shootings and car-rammings. A few of the attacks had been carried out by Arab Israeli citizens.

On Friday, two Israeli policemen were shot dead by three Arab Israeli gunmen in occupied East Jerusalem . The gunmen were all shot dead by police.

Israel blames the violence on incitement by the Palestinian leadership. The Palestinian Authority, which exercises limited self-rule in the occupied West Bank, says desperation over the 50-year occupation of land sought by Palestinians for a state is the cause.

Palestinians want to establish an independent state in East Jerusalem, the West Bank and the Gaza Strip, territories Israel captured in the 1967 Middle East war.