HOUSTON—Slowed by a political gridlock and unresolved boundary disputes, Lebanon has stood on the sidelines watching massive natural gas discoveries such as Leviathan, Aphrodite and Karish sprout from deepwater Mediterranean areas in its neighbors’ jurisdictions.

But the country, bordered by Syria to the north and Israel to the south, wants in on the action in hopes of boosting its economy, securing energy resources and attracting long-term foreign investment.

“We want to make this sector a success story for the Lebanese,” Lebanon’s Minister of Energy and Water Cesar Abi Khalil said July 6 during an event hosted by the Mayer Brown law firm’s Houston office.

The ministry is on a roadshow showcasing five offshore blocks—three of which are located along Lebanon’s southern border with Israel. It is offering exploration and production agreements to investors as part of the country’s first offshore licensing round. Admittedly late to the game, with oil and gas produced offshore neighboring countries for decades, Khalil said Lebanon has benefited from the experience of others in developing what he called an attractive legal framework.

Lebanese energy officials hope its domestic gas demand, proximity to European markets with export options via the Arab Gas Pipeline, an offshore shallow-water pipeline and resource potential will attract investors. But they acknowledge challenges that could give investors pause—no exploratory drilling has occurred in offshore blocks, though wells have been drilled onshore; there is insufficient infrastructure offshore; political factors exist; and lower commodity prices remain.

Lebanon’s energy ministry is picking up where it left off when a political impasse left the country without a president for about two years, stalling its oil and gas E&P efforts as parliament debated action.

“We have been delayed, but this is the price of democracy you have to pay,” said Khalil. “When the milestones coincide with parliamentary elections, presidential elections, formations of government, it has taken more time than it was supposed to. But now, as I said, we have passed all those milestones.”

Companies that prequalified in 2013 to participate in the licensing round may still participate, if eligibility criteria are met. Since then another pre-qualification round was opened. In all, more than 50 companies have pre-qualified to participate. The round was relaunched earlier this year. 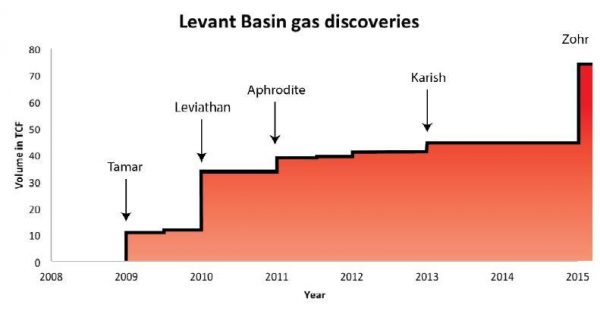 Lebanon is seeking bids from consortia comprised of one operator holding a minimum 35% stake and at least two unaffiliated right holders, each with a minimum 10% stake. Bid requirements include the submittal of a technical proposal describing planned exploration and seismic work and a commercial proposal containing the percentage of state share of profit petroleum and the cost petroleum recovery ceiling. Although each item will be independently evaluated, the commercial proposal is weighted at 70%.

The local content percentage is 80%. The minister seemed confident the local workforce is capable, but said the percentage would not be a deal breaker.

The ministry’s job now is to make sure interested companies submit bids by the Sept. 15 deadline, Khalil said, adding the high level of interest speaks to region’s offshore potential.

Lebanon has 3-D seismic data that covers more than 85% of its offshore territory and 2-D seismic covers it all, energy officials said.

The northernmost block offered—Block 1 with depths ranging from 1,500 m to 2,000 m—is believed to be oil and gas prone. While Block 4, located in shallow water closer to the Lebanese coastline, is believed to hold more natural gas. Of the three southern blocks—blocks 8, 9 and 10—the latter is most prospective for oil.

“We have high probabilities of oil and associated liquids. We have many seeps that have been recorded with satellite photos. We have superimposed those seeps on our seismic scans,” the minister explained.

Looking at the geology of discoveries in the region, Wissam Chbat, chairman of the board and head of geology and geophysics for the Lebanese Petroleum Administration, pointed out proven oil and gas petroleum systems offshore areas such as Syria and Cyprus. He also noted the mature stage of conventional plays in the Levant Basin, saying the creaming curve was flattening before Eni’s gigantic Zohr gas discovery offshore Egypt in 2015.

“Every time we have stagnation in discoveries … this means you have to think differently in exploration terms or you have to address new types of plays,” Chbat said.

Lebanon has a “complex geology but a very rewarding one.” Basin modeling indicates biogenic gas and thermogenic hydrocarbon potential. The offshore acreage includes structural and stratigraphic plays. “In the area we have Late Cretaceous new play concept, Oligo-Miocene—which is a proven play type in the region, and recently with the stratigraphic plays we have proven carbonates,” Chbat said.

Looking at Late Cretaceous anticlines in Block 1, he said gas chimneys in the Pliocene indicate gas leakage due to the absence of Messinian. He also pointed out hydrocarbon indicators in Block 4, where gas chimney correlates with a medium-certainty seep. Farther south, Block 9—about 6 km northeast of the Karish Field—shows Late Miocene transpressive anticlines. The block could hold gas-filled reservoirs and possible hydrocarbon migration from deep thermogenic source rocks.

Lebanon hopes to make a commercial discovery by 2019, Khalil said.

Lebanon’s shared maritime border with Israel has been an ongoing point of contention. The disputed region covers more than 300 sq miles, according to the U.S. Energy Information Administration (EIA). The U.S. has served as a mediator between the two.

“Lebanon has a sovereign right to exploit all of its reserves,” Khalil said, adding the geological structures were formed long before political boundaries were set.

Lebanon has drilling prospects farther north, but interest appears to be the highest in the south. Southern acreage had the highest nomination rates by the oil and gas companies for inclusion in the licensing, he said, noting companies are aware of boundary concerns.

“We rely on exploration and production to be the main driver of our economy,” Khalil said.” We hope we will be able to achieve the aspirations of the Lebanese people.”

Winners of the blocks will be announced Nov. 15. Lebanon hopes to award four blocks.

“Lebanon’s government estimates that there are potential natural gas reserves of 25 trillion cubic feet or more located in its offshore territory,” the EIA said in a report on Lebanon. “But until more exploration occurs, that figure remains speculative.”