U.N. Security Council condemned fighting in the buffer zone between Syria and Israel 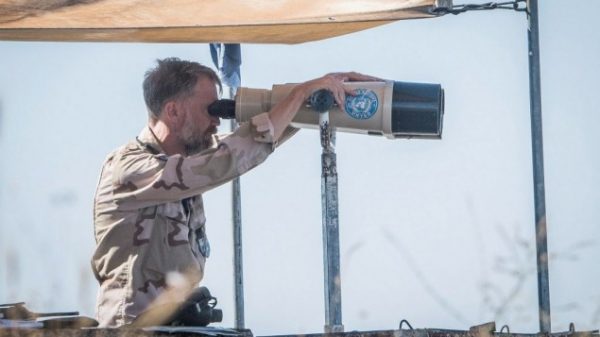 A UN observer looks through binoculars at a lookout point as smoke rises from a Syrian side of the buffer zone
Share:

The U.N. Security Council on Thursday strongly condemned fighting in the buffer zone between Syria and Israel and urged the Syrian government and opposition groups to withdraw from the area which is patrolled by U.N. peacekeepers.

A resolution sponsored by Russia and the United States and adopted unanimously Thursday by the U.N. Security Council extends the mandate of the peacekeeping mission known as UNDOF until Dec. 31.

Israel captured the Golan Heights from Syria in the 1967 Mideast war and subsequently annexed the strategic plateau overlooking northern Israel, but that annexation is not internationally recognized.

UNDOF has patrolled the buffer zone between Syria and Israel since 1974, a year after the 1973 Arab-Israeli war. For nearly four decades UNDOF helped enforce a stable truce between the two countries but the Syrian war spilled into the zone.

The six-year conflict has not only seen some intense fighting in the buffer zone but the abduction of peacekeepers by al-Qaida-linked anti-Syrian government militants, and other attacks that prompted several countries to withdraw their soldiers.

Israel has tried to stay out of the six-year civil war in Syria and refrained from taking sides, but has responded to spillover fire on numerous occasions. The Israeli military said Sunday it attacked a series of targets belonging to the Syrian military, after several projectiles from Syria landed in the Israeli-controlled Golan Heights for a second day.

The resolution backed Secretary-General Antonio Guterres’ findings that ongoing military activities in the area of separation have the potential to escalate tensions and jeopardize the cease-fire between Israel and Syria, and pose risks to civilians and U.N. personnel on the ground.

According to the U.N. peacekeeping department, the UNDOF mission has 959 personnel including 828 military.

The resolution condemned the use of heavy weapons, including tanks, by both the Syrian armed forces and armed groups in the area of separation.

It underscored the need for UNDOF to have the sophisticated equipment and technology to effectively monitor the area of separation and cease-fire line including the capability to counter improvised explosive devices and “a sense and warn system, to ensure the safety and security of UNDOF personnel and equipment.”

The Security Council urged secretary-general Gutteres “to accelerate the development of proposals for such technologies.”