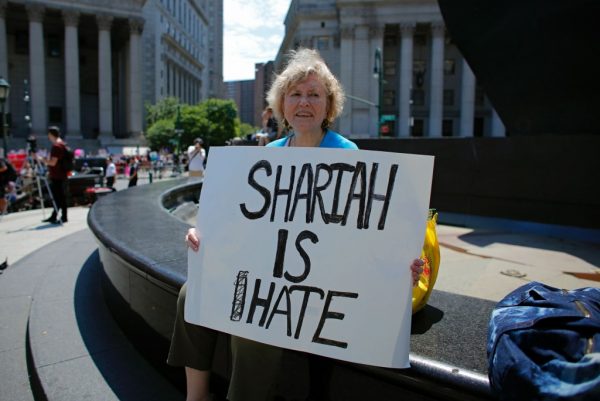 A Trump supporter holds up a sign during an anti-sharia law rally origanized by ACT for America on Saturday in New York. (Kena Betancur/AFP/Getty Images)
Share:

An anti-Muslim activist group is rallying in numerous cities across the country, marching in opposition to Islamic law, which the group believes is a threat to American society.

ACT for America, a lobbyist organization with close ties to the Trump administration that has helped pass state-level bills targeting Islamic law and refugees, organized the protests as a nationwide “March Against Sharia.”

While demonstrators argue they are protecting free speech and defending traditional American values, counterprotesters say the marchers underscore a larger trend of intolerance that is increasingly evident across a politically divided country.

In New York City, the rally started downtown nearly an hour late with a crowd of around three dozen people, some of them in camouflage fatigues and waving American flags. About a dozen wore shirts identifying them as members of the anti-government Oath Keepers and the Three Percenters.

Across the street, separated by police officers and barricades, a few hundred mostly young people — including labor activists, Jewish and Muslim protesters, and left-wing anarchists — blasted air horns and whistles and held banners that read “Fascists out of NYC.”

From a stage adorned with an American flag, Pax Hart, who organized ACT’s march, railed against the left and the media, and branded the rival protesters as violent Marxists and “idiots.” All have conspired to shut the protest down, he said.

If you feel unsafe “walking around in a hijab, try being a conservative on a college campus,” Hart said. “We’re here protecting their rights, and they’re trying to shut us down! It’s insane!”

The left, Hart said, will criticize everything but Islam: “They’re gonna blast a nonexistent rape culture, but they’re not going to criticize Islam! … We will not yield to Islamic exceptionalism.”

Pawl Bazile, who runs Proud Boy, a far-right online magazine, then took to the stage, eliciting cheers. “We understand what Islam is, and we say no,” he said. “You’re in the land of Budweiser and bikinis, for God’s sake.” Anyone who doesn’t like it can move to Saudi Arabia or Syria, he said.

Men wearing T-shirts affiliated with the Oath Keepers, which the SPLC has labeled as a “radical anti-government” group, stood by within the crowd and around the perimeter, surveying the crowd.

Frank Morganthaler, the vice president of the New York State Oath Keepers, said the smaller-than-expected turnout might have been the result of some people being “intimidated” by the threat of violence from opposition protesters. “These people go wild,” he said, glancing across the street. “They’re crazy. We’ve seen what they’ve done in other cities, breaking windows and other stuff.”

A dozen young white men with tucked-in dress shirts, sunglasses and slicked-down side-parts stood in back, watching. They identified themselves as “the alt-right,” a small, far-right movement that seeks a whites-only state.

Across the street and two sets of police barricades, Marjorie Stamberg, a New York City teacher, held up a sign that read “drive fascists out of NYC.”

“Two people were murdered in Portland a few weeks ago by their people,” she said, referring to a white man who attended far-right rallies and allegedly stabbed three people on a commuter train after he went on a racist tirade. “If they tell you it’s about free speech, they’re liars. They’re killers. They’re haters.”

Organized in part to memorialize the anniversary of the Pulse Nightclub shooting in Orlando, the multicity demonstrations aim to raise awareness of what ACT sees as the negative effects of Muslim immigration to the United States. ACT frames its cause as a human rights issue.

The organization, which the SPLC recognizes as a hate group, was founded in 2007, and its leaders have labeled Islam a “cancer,” propagated theories of a secret plot by Muslims, Democrats, communists and the media to destroy America from within, and sponsored lectures on how to monitor and oppose American mosques. ACT’s leader, Brigitte Gabriel, who says that she is anti-Sharia, not anti-Muslim, often appears as a cheerleader for President Donald Trump in conservative media, trumpeting her group’s ties to the White House. Two of Trump’s former advisers, Michael Flynn and Walid Phares, sit on ACT for America’s board.

Joseph Weidknecht, a 25-year-old construction worker from Austin, said he felt compelled to join the ACT rally because of the “ongoing rape crisis in Central and Western Europe, where entire sections of the city are no-go zones.”

“There’s rampant rape happening because of Syrian immigrants, and we have to stop that from coming to America,” Weidknecht said.

Positioned outside the gates of the capitol alongside a group of protesters wearing “Make America Great Again” gear, Weidknecht said he believes sharia law isn’t a partisan issue, but an American one.

The protest was marked by brief heated confrontations between the two groups, though it appeared no protesters engaged in violence.

On each side, there were protesters who identified themselves as liberals, but Annie, 36, a stay-at-home mom from Austin, said liberals protesting against sharia law are either misinformed or “willfully ignorant” of what sharia law is.

“They’re saying they’re protecting women or other liberal values, but they don’t realize who they’re standing next to,” Annie said. “If they were more informed I doubt they would be standing in solidarity with a hate group.”

Roughly 200 demonstrators gathered peacefully for a rally in a Seattle park and later marched toward Seattle City Hall, where they significantly outnumbered those gathered for an anti-Sharia law rally.

Several homeless people, many of whom live in the neighborhood where the rally was held, cheered as the demonstrators marched by chanting, “Muslims Are Welcome here, no hate, no fear” and “When Muslim rights are under attack, what do we do? Stand up, fight back.”

Lisa Jaffe, 52, who carried a sign saying “loving my Muslim neighbor since 1964” said she wanted to participate in the counter demonstration because she believes the growing lack of tolerance has no place in her America.

Earlier in the day in front of the capitol building in Harrisburg, Pa., about three dozen anti-sharia protesters were separated from a similar number of anti-fascist protesters by a police barricade.

The anti-fascist protesters — wearing all black and balaclavas — played drums and cowbells, chanting “no hate, no Nazis.” The anti-sharia protesters, some of whom were also masked and carried handguns, sang “America the Beautiful” and chanted “take a shower” in response.

“This is a march against sharia, not Muslims,” said Steven R. Moore, a 35-year-old from Washington County, Pa., who works in the oil and gas industry. “We are not affiliated with any extremist groups … Sharia is a barbaric system that the Islamic State is trying to impose in our country.”

Timmy Wylie, a spokesman for East Shore Antifa, said the group showed up to shut down the anti-sharia march because they believe it is a march against Muslims. He grew up in the Harrisburg area and said citizens should instead focus on the region’s struggling economy.

“There’s a lot of people without two nickels to scrape together, but we still take care of each other,” he said in a telephone interview before the march.

Not all anti-Sharia protesters agreed on tactics. Francisco Rivera, a student in his 20s from Maryland, is a spokesman for Vanguard America, a group that has claimed credit for white nationalist posters displayed on college campuses in recent months. In Harrisburg, about 10 members of the group stood out, wearing white polo shirts and covering their faces due to fear of anti-fascist retribution.

After an organizer of the anti-Sharia march criticized Rivera for hiding his face, he gave a speech to the group that praised “our civilization.”

“I don’t believe in having Muslims in the United States,” he said. “Their culture is incompatible with ours.”