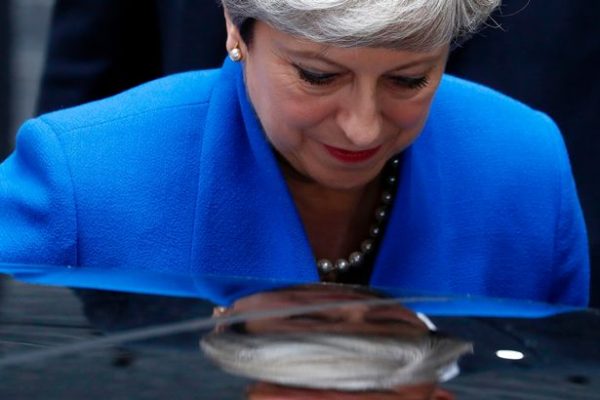 A humbled Theresa May has finally apologised to defeated Tory MPs and pledged to stay for five more years – but is now too ‘weak’ to sack rivals including Philip Hammond and Boris Johnson, it was revealed today.

The Prime Minister’s political career is hanging by a thread after she promised to offer ‘certainty’ for Britain as PM – despite the Tories suffering humiliating losses when her election gamble backfired.
She will now rely on the support of the Democratic Unionist Party (DUP) in Northern Ireland to prop her up when she had hoped for a landslide victory.

The Chancellor and Foreign Minister could have been ‘goners’ but she is now ‘too weak to sack them’, a source said, while another expert suggested she has has been ‘taken prisoner’ by her Cabinet colleagues.

Earlier Mrs May stood in Downing Street and declared her determination to carry on for a full five-year term after getting permission from the Queen to form a government, even though she spectacularly lost her Commons majority overnight.

Incredibly she failed to mention that she had humiliatingly lost seats to Labour after calling the election three years early in a bid to capitalise on sky-high poll ratings.

Around two hours later she appeared on TV again and apologised to defeated Tory MPs after she was accused ‘lacking humility’.

Mrs May acknowledged that she had called an election three years early hoping for a ‘large’ majority, adding: ‘That was not the result that we secured’.

She said: ‘As I reflect on the result, I will reflect on what we need to do in the future to take the party forward.

‘I am sorry for those candidates and hard-working party workers who weren’t successful but also particularly sorry for those colleagues who were MPs or ministers who had contributed so much to our country and who lost their seats and didn’t deserve to lose their seats.’

Mrs May today refused to say if her election disaster has killed off Britain’s chances of a good deal to leave the EU – with former Chancellor George Osborne saying: ‘Hard Brexit went in the rubbish bin last night’.

Senior MPs such as Sarah Wollaston, Anna Soubry and Nicky Morgan have openly called for Mrs May to step aside – with the latter suggesting she should go within ‘weeks or months’ because her credibility is shot.

One senior Tory MP told ITV News: ‘We all f***ing hate her. But there is nothing we can do. She has totally f***ed us’.