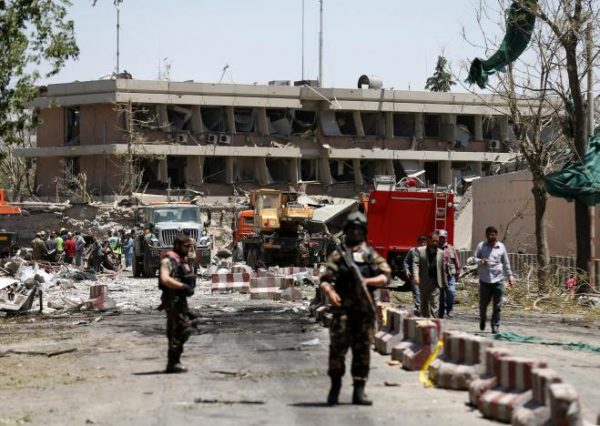 Afghan officials inspect outside the German embassy after a blast in Kabul, Afghanistan May 31, 2017. REUTERS/Mohammad Ismail
Share:
A powerful bomb hidden in a sewage tanker exploded in the morning rush hour in the center of the Afghan capital on Wednesday, police said, killing at least 80 people, wounding hundreds and damaging embassy buildings.

The victims appeared mainly to have been Afghan civilians.

The bomb, one of the deadliest in Kabul and coming at the start of the holy month of Ramadan, exploded close to the fortified entrance to the German embassy, wounding some staff, German Foreign Minister Sigmar Gabriel said. Pictures showed the embassy building with its windows ripped out.

One Afghan security guard was killed and others were likely among the dead, Gabriel said. A spokeswoman for the German foreign ministry said the bomber’s target was unknown.

“Such attacks do not change our resolve in continuing to support the Afghan government in the stabilization of the country,” Gabriel said.

Basir Mujahid, a spokesman for city police, said the explosives were hidden in a sewage truck. He also suggested that the German embassy might not have been the target of the blast, which sent towering clouds of black smoke into the sky near the presidential palace.

“There are several other important compounds and offices near there too,” he told Reuters.

The blast, which shattered windows and blew doors off their hinges in houses hundreds of meters away, was unusually strong.

No group had claimed responsibility by late Wednesday afternoon.

The Taliban, seeking to reimpose Islamic rule after their 2001 ouster by U.S.-led forces, denied responsibility and said they condemned attacks that have no legitimate target and killed civilians.

Islamic State, a smaller militant group in Afghanistan seeking to project its claim to a global Islamic caliphate beyond its Middle East base, has previously claimed responsibility for high-profile attacks in Kabul, including one on a military hospital in March that killed more than 50 people.

The NATO-led Resolute Support (RS) mission in Kabul said Afghan security forces prevented the vehicle carrying the bomb from entering the heavily protected Green Zone that houses many foreign embassies as well as its headquarters, also suggesting it may not have reached its intended target.

A public health official said at least 80 people had been killed and more than 350 wounded.

Germany will cease flights deporting rejected asylum seekers to Afghanistan in the next few days, a German official confirmed. Germany began carrying out group deportations of Afghans in December, seeking to show it is tackling an influx of migrants by getting rid of those who do not qualify as refugees.

The French, Turkish and Chinese embassies were among those damaged, the three countries said, adding there were no immediate signs of injuries among their diplomats. The BBC said one of its drivers, an Afghan, was killed driving journalists to work. Four journalists were wounded and treated in hospital.

Switzerland said the Swiss Agency for Development and Cooperation had several windows broken but the staff were safe.

Video shot at the scene showed burning debris, crumbled walls and buildings, and destroyed cars, many with dead or injured people inside. Blood streamed down the faces of walking wounded.

At the Wazir Akbar Khan hospital a few blocks away, there were scenes of chaos as ambulances brought in wounded. Frantic relatives scanned casualty lists and questioned hospital staff for news.

“It felt like an earthquake,” said 21-year-old Mohammad Hassan, describing the moment the blast struck the bank where he was working. His head wound had been bandaged but blood still soaked his white dress shirt.

Another lightly wounded victim, Nabib Ahmad, 27, said there was widespread destruction and confusion.

“I couldn’t think clearly, there was a mess everywhere,” he said.

Frenzy erupted out outside the hospital as ambulances and police trucks began bringing in the bodies of those killed. Some bodies were burned or destroyed beyond recognition.

India and Pakistan condemned the blast.

“India stands with Afghanistan in fighting all types of terrorism. Forces supporting terrorism need to be defeated,” Indian Prime Minister Narendra Modi said in a tweet. India said its embassy staff were safe.

Wednesday’s attack provided another clear demonstration that Ramadan, which began at the weekend, would provide little respite from the violence across Afghanistan.

“Today’s tragedy shows that the conflict in Afghanistan is not winding down but dangerously widening, in a way that should alarm the international community,” it said in a statement.

The explosion will add pressure to the fragile government of President Ashraf Ghani, which has faced mounting discontent over its inability to control the insurgency and provide security for Afghan citizens.

The Taliban have been stepping up their push to defeat the U.S.-backed government. Since most international troops withdrew at the end of 2014, the Taliban have gained ground and now control or contest about 40 percent of the country, according to U.S. estimates, though Ghani’s government holds all provincial centres.

U.S. President Donald Trump is due to decide soon on a recommendation to send 3,000 to 5,000 more troops to bolster the small NATO training force and U.S. counter-terrorism mission now totaling just over 10,000.

The commander of U.S. forces in Afghanistan, General John Nicholson, told a congressional hearing this year that he needed several thousand more troops to help Afghan forces break a “stalemate” with the Taliban.