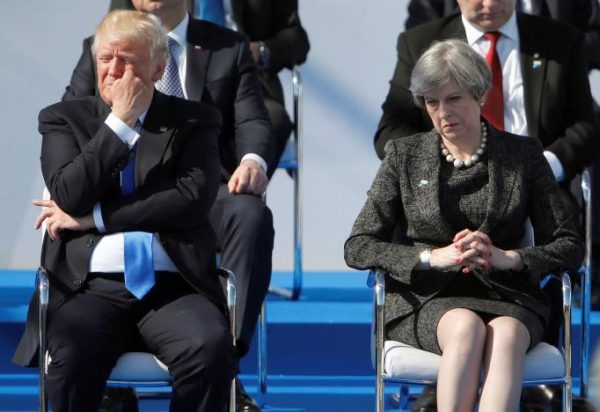 U.S. President Donald Trump (L) and Britain’s Prime Minister Theresa May react during a ceremony at the new NATO headquarters before the start of a summit in Brussels, Belgium, May 25, 2017. REUTERS/Christian Hartmann
Share:

Prime Minister Theresa May raised British concerns with Trump at a NATO summit in Brussels, telling him intelligence shared between their two countries had to remain secure, in a rare public show of dissatisfaction with Britain’s closest security ally.

After a suspension that lasted about a day, Britain’s most senior counter terrorism officer said late on Thursday that the police had resumed sharing information with the United States after receiving “fresh assurances”.

“I am asking the Department of Justice and other relevant agencies to launch a complete review of this matter, and if appropriate, the culprit should be prosecuted to the fullest extent of the law,” he said in a statement released after his arrival in Brussels.

The row comes as British police stepped up their investigation into a suspected network behind Salman Abedi, a 22-year-old British-born man with Libyan parents who blew himself up on Monday night at the Manchester Arena indoor venue after a concert by U.S. singer Ariana Grande

The singer’s fans are mostly children and teenagers and the explosion killed 22 people, ranging from an eight-year-old schoolgirl to parents who had come to pick up their children.

Police are holding eight people in custody in connection with the attack and bomb disposal units were used in searches as officers raided properties across the city.

In the nearby town of Wigan, where a man was arrested on Wednesday, police said they had discovered potentially suspicious items, prompting them to bring in the bomb squad and evacuate properties in the area. The security alert was later lifted.

“I want to reassure people that the arrests that we have made are significant, and initial searches of premises have revealed items that we believe are very important to the investigation,” Manchester’s police chief Ian Hopkins said.

With the official threat level raised to “critical”, meaning a further attack could be imminent, troops have been deployed to free up police, and armed officers patrolled trains for the first time in Britain.

The state-run National Health Service said all 27 major trauma units in England had told staff to be prepared for a possible attack, ahead of the weekend and a public holiday on Monday.

Abedi had recently returned from Libya, where his father and younger brother were arrested by a militia on Wednesday.

Abedi passed through Istanbul on his way to Europe, Turkish security officials told Reuters, but said there were no records of him entering Syria during his travels as had been suggested on Wednesday by the French interior minister. [L8N1IR4RV]

A source with knowledge of the investigation told Reuters Abedi might have made the bomb himself or with some assistance from an accomplice. That was a change from previous thinking that a bomb-maker might be at large.

“The focus is still the search for accomplices and the network but he could have made this bomb himself,” the source said.

Over the past three days, several key details of the investigation, including the name of the bomber, first came out in U.S. media, angering British police who feared such leaks risked compromising their investigation.

May raised the matter with Trump as they gathered for a group photograph at the NATO summit.

“She expressed the view that the intelligence sharing relationship we have with the U.S. is hugely important and valuable, but that the information that we share should be kept secure,” a British government source said.

U.S. Attorney General Jeff Sessions also spoke to Britain’s interior minister Amber Rudd about the issue. The U.S. Justice Department said it had initiated steps to address the “rampant leaks”, which it said could not be tolerated.

The decision to stop sharing police information with U.S. agencies was an extraordinary step for Britain, which is usually at pains to emphasize its “special relationship” with the United States.

“While we do not usually comment on information sharing arrangements … having received fresh assurances, we are now working closely with our key partners around the world,” said Mark Rowley, Britain’s lead officer for counter-terrorism policing.

British authorities did not say the investigation had in fact been compromised by the leaks.

The attack injured 116 people, of whom 75 were admitted to hospital and 23 remain in a very serious condition, health authorities said.

Queen Elizabeth visited the Royal Manchester Children’s Hospital, where some of the casualties have been treated, and was filmed chatting with a girl lying injured on a ward. She described the attack as “very wicked”.

A minute’s silence was observed in honor of the victims at a square in central Manchester, after which crowds broke into an emotional chorus of “Don’t Look Back in Anger”, an old hit song by the band Oasis who are from the city.

The city’s two giant soccer clubs, Manchester United and Manchester City, laid aside their rivalry to jointly donate 1 million pounds ($1.3 million) to an emergency fund set up to support families affected by the attack. They labeled their initiative “A City United”.

The bombing has caused revulsion across the world for targeting children and teenagers. Former U.S. President Barack Obama, meeting German Chancellor Angela Merkel at an event in Berlin, said the pair were “heartbroken”, while Trump told fellow NATO leaders the attack was “savage” and “barbaric”.

Many European cities, including Paris, Berlin and Brussels, have suffered attacks in the past two years, underlining the importance of confidential intelligence cooperation.

Britain routinely shares intelligence with the United States bilaterally, and as part of the “Five Eyes” network which also includes Australia, Canada and New Zealand.

Trump was widely criticized this month after it emerged he had discussed sensitive Syria-related intelligence, originating from an ally, with Russian officials at a White House meeting. May said at the time Britain would continue to share information with Washington.

Pictures published by the New York Times included remains of the bomb and of the rucksack carried by the suicide bomber, and showed blood stains amid the wreckage.

“I think it’s pretty disgusting,” said Scott Lightfoot, a Manchester resident, speaking outside a train station in the city. He criticized media for publishing such material.

“Who’s leaking it? Where’s it coming from? This is British intelligence at the end of the day, people shouldn’t be finding out about this.”

In a statement, the New York Times defended its decision to publish the images, saying they were “neither graphic nor disrespectful of victims”.

“Our coverage of Monday’s horrific attack has been both comprehensive and responsible,” the newspaper said.