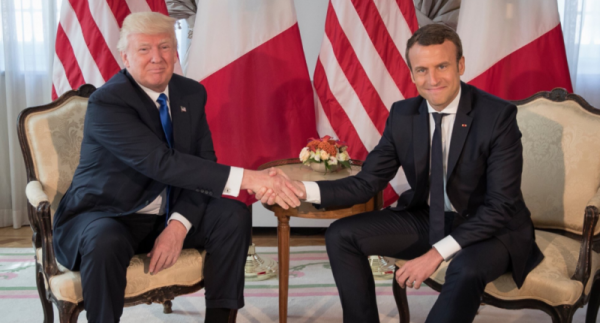 Newly elected French President Emmanuel Macron completed the initial leg of his first diplomatic marathon with a win: He beat his US counterpart in a handshake contest.

It wasn’t billed as such, of course, but during his brief yet already memorable tenure as president, Donald Trump has made headlines with his handshakes.

There was the nearly 19-second handlock with Shinzo Abe that left the Japanese prime minister sitting back in his chair with relief when it finally came to an end. There were the yanks to the arms of Supreme Court nominee Neil Gorsuch and Vice President Mike Pence. There was hand holding and affectionate tapping with UK Prime Minster Theresa May (who, unlike First Lady Melania Trump recently, acquiesced) and his outright blanking of German Chancellor Angela Merkel when she, during a White House photo op, suggested they press the flesh.

Forewarned is forearmed, it seems, because when Macron encountered Trump in Brussels for the first time, it was Trump who couldn’t free his digits from his jaw clenching counterpart’s steely grip. When Macron finally did let go, Trump’s fingers were visibly white.

Score one for Macron.

The grip grapple didn’t seem to tarnish the ensuing encounter between the two, which took place at the US Ambassador’s residence in Brussels over a luncheon of tomato and mozzarella, veal filet and Belgian chocolate mousse. When it was all over Macron said their conversation had been “extremely direct and very frank”, but he categorized it as “warm.”

During the meeting Macron brought up climate change with Trump, who has threatened to withdraw from the Paris Agreement, which came into effect just four days before he was elected. Macron urged Trump not to make any rushed decisions.

“I respect the fact he placed under review the Paris agreement,” Macron said later at a joint press conference with European Commission President Jean-Claude Juncker. “My wish is that the United States takes no hurried decision.”

Macron said the two leaders also conferred security cooperation and their shared wish to find a solution to the crisis in Syria.

The French leader likewise discussed security earlier in the day during talks with Belgian Prime Minister Charles Michel. “Beyond solidarity, it’s obviously European cooperation that we need to reinforce, in the field of intelligence, information sharing, the protection of our common borders,” he said after that meeting.

After dining with Trump, Macron turned his sights to Turkish President Tayyip Erdogan. The fruits of that session were more concrete, with the two agreeing to increase trade to €20 billion a year. They also said they would work to improve diplomatic ties between Ankara and the European Union.

Macron then focused his attention to matters closer to home, meeting with European Commission President Jean-Claude Juncker. He said that the EU needs to do more to stem the tide of low-paid temporary workers from Eastern Europe into France because the trend was diminishing support for the European project.

Macron told reporters that he was committed to the reforms France needs to revive its economy, but that the EU needs to safeguard welfare standards.

“Alongside this France that reforms, that transforms, that overhauls, we need a Europe that protects,” he said.
FRANCE24