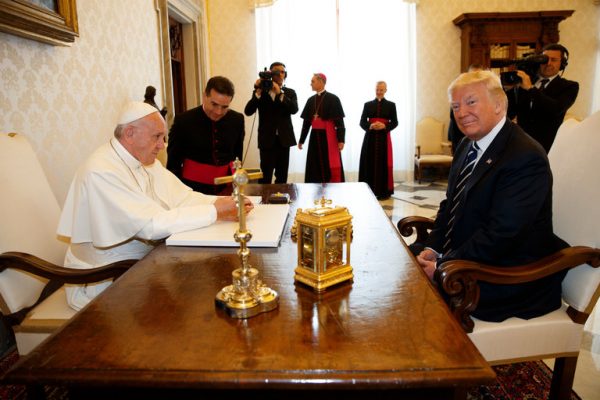 Pope Francis with President Trump at the Vatican
Share:

Pope Francis put climate change on the agenda of his first meeting with President Trump on Wednesday, and the subject is likely to come up again and again in the president’s encounters with other world leaders in the coming days.

That could put Mr. Trump on the back foot after what had been an energetic swing through the Middle East.

The pope presented the president with a copy of his influential encyclical on preserving the environment, while in a broader meeting, Cardinal Pietro Parolin, the Vatican’s secretary of state, urged Mr. Trump not to pull the United States out of the Paris climate accord.

Mr. Trump told his Vatican hosts that he would not make a final decision until after he returned to the United States, despite some expectations that he could announce a decision at the Group of 7 summit meeting in Italy this weekend.

The leaders of Germany, France and Canada have all pressed Mr. Trump on the Paris accord, and they are likely to renew their pleas at the summit meeting, in the Sicilian town of Taormina. Their argument, officials said, will be that withdrawing from the accord would damage America’s credibility and hurt Mr. Trump’s ability to achieve other parts of his agenda.

“They were encouraging continued participation,” Secretary of State Rex W. Tillerson told reporters about the message from the Vatican. “We had a good exchange on the difficulty of balancing addressing climate change, and insuring that you still have a thriving economy and you can still offer people jobs so they can feed their families.”

In their first encounter, the pope and the president, two men with starkly different worldviews, sought to bridge the chasm between them with a handshake, a private audience and a mutual pledge to work for peace.

They stuck mainly to protocol, avoiding a public reprise of the barbs they aimed at each other during Mr. Trump’s presidential campaign or the pope’s thinly veiled critiques of the new president as a symbol of a dangerously reinvigorated nationalism.

But there was also a sense in the Vatican that Mr. Trump was easier to talk to than his tough language on the campaign trail or his sharp words toward Francis had led them to believe. That could be particularly true on the issue of American participation in the Paris accord, where there are sharply conflicting views inside the West Wing.

Francis left no doubt about his message in the gifts he gave to his guest, notably the essay on the importance of the environment, which stands as a rebuke to the climate change skepticism espoused by Mr. Trump. Francis also presented him with a medallion engraved with the image of an olive tree — “a symbol of peace,” he explained. “We can use peace,” Mr. Trump said. Francis replied, “It is with all hope that you may become an olive tree to make peace.” As he bade the pope farewell, Mr. Trump told him, “I won’t forget what you said.”

For Mr. Trump, who came here after stops in Saudi Arabia and Israel, the visit to the Vatican capped a tour of the ancestral homes of three of the world’s great monotheistic religions. For Francis, who made his own landmark visit to Egypt last month, it was a chance to welcome a second American leader, after President Barack Obama paid his respects in 2014. Unlike that meeting, few expected a meeting of the minds. Pope Francis and Mr. Trump have diametrically opposed views on issues like immigration, climate change and arms sales. Although both appeared determined not to let politics spoil their encounter, their fraught personal history and divergent personal styles made for a loaded backdrop.

In Saudi Arabia, Mr. Trump came with a $110 billion arms deal and was embraced by a royal family eager to improve relations with Washington. In Israel, he expressed America’s solidarity with a close ally and staked his claim as a peacemaker. At the Vatican and elsewhere in Europe, however, Mr. Trump has had to overcome suspicions.

At 8:20 a.m., under an azure sky, the president’s motorcade rolled into the courtyard of the Apostolic Palace. Swiss Guards stood at attention as Mr. Trump and his wife, Melania, stepped out of a sport utility vehicle — he in a dark suit, she in a black dress with a veil on her hair. A few minutes earlier, the pope arrived in a lone blue Ford Focus.

Archbishop Georg Gänswein, the prefect of the papal household, greeted Mr. Trump and escorted him to an antechamber outside the pope’s office, where, after a few seconds, Francis came to greet him. “Thank you so much,” Mr. Trump said. “It’s an honor.”

After posing for a picture — “protocol,” the pope murmured — Mr. Trump took a seat across a wooden desk from Francis. Vatican officials shooed reporters out of the room and the two men met for half an hour (the pope’s session with Mr. Obama lasted 20 minutes longer). Speaking to reporters later, Mr. Trump described the session as “fantastic.” Later, on Twitter, he wrote, “I leave the Vatican more determined than ever to pursue PEACE in our world.”

A bell signaling the end of the audience rang at 9 a.m., and Mrs. Trump joined her husband and the pope. Francis looked graver than Mr. Trump, but he lightened up when he shook Mrs. Trump’s hand, asking her in Italian, “Did you give him potica to eat?” (Potica is a Slovenian dessert.)

Missing was Mr. Trump’s chief strategist, Stephen K. Bannon, who left the trip before coming to Rome. Mr. Bannon, a Catholic, has criticized Pope Francis as a socialist, a global elitist and a promoter of Muslim migration to Europe. He also favors pulling out of the Paris accord. “That is why this visit is so important,” said Jim Nicholson, a former United States ambassador to the Vatican. “There still is an educational element to it. It is an opportunity for President Trump to learn a lot more about this man, his life and his formation.”

In addition to the environment essay, “Laudato Si’: On Care for Our Common Home,” the pope gave the president two of his other writings — on the family and the joy of the Gospel — as well as his most recent World Day of Peace message (“I signed it personally for you,” Francis said). “Well, I’ll be reading them,” said Mr. Trump, who gave Francis a set of books by the Rev. Dr. Martin Luther King Jr.

The pope and the president were both elected as outsiders promising to carry the voices of the forgotten to the centers of power. But that is more or less where the similarities end. Mr. Trump is the scion of a real estate developer and a thrice-married lover of the gilded. Francis has made a calling card out of modesty. When, in 2013, he paid his own hotel bill after being elected pope, Mr. Trump wrote on Twitter: “I don’t like seeing the Pope standing at the checkout counter (front desk) of a hotel in order to pay his bill. It’s not Pope-like!”

But Francis is also a shrewd political operator, and he had said that he was not seeking a confrontation. “In our talk, things will come out,” he told reporters recently. “I will say what I think, he will say what he thinks, but I never, ever, wanted to make a judgment without hearing the person.”