Trump Leaves Israel With Hope for Peace, but No Plan for It 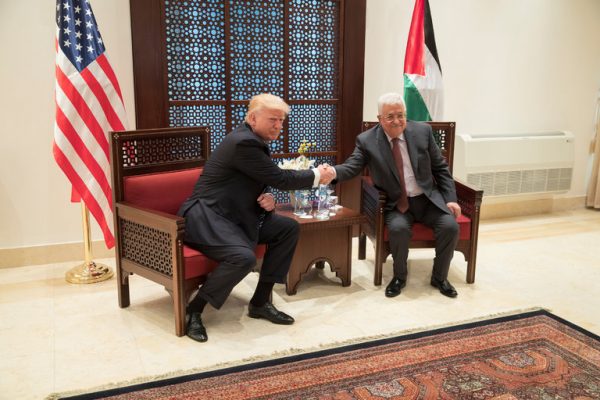 In case there was any doubt, President Trump made it exceedingly clear: He wants a deal. “I intend to do everything I can,” he said on Tuesday.

Moreover, he left after a 28-hour visit to Israel and the occupied West Bank convinced that he has partners in peace after meeting with the president of the Palestinian Authority, Mahmoud Abbas, and Prime Minister Benjamin Netanyahu of Israel.

“President Abbas assures me he is ready to work toward that goal in good faith,” Mr. Trump said in Bethlehem with Mr. Abbas by his side. “And Prime Minister Netanyahu has promised the same.”

What Mr. Trump did not do was reveal the least hint of what, if anything, was behind it: He put little public pressure on either leader. There was none of the usual talk of borders, of settlements, of incitement of terrorism or of the long and gnarled history of two peoples on the same land.

He did not say anything about moving the American Embassy to Jerusalem or recognize the city as Israel’s capital. Nor was there a process for what comes next.

That does not mean, he and others were quick to add, that the quick trip to Israel and the occupied territories, on Mr. Trump’s first foray abroad, was not useful in building bridges, in setting a different tone, in showing Israelis full support and Palestinians respect.

Mr. Trump made clear that the new relationship Israel seeks with its Sunni Arab neighbors, some of whom he met earlier in Saudi Arabia, was linked to progress with the Palestinians. Mr. Trump seemed to accomplish all of this, most experts here agreed, with few of the missteps that have dogged him at home.

Mr. Netanyahu, pressed by conservatives in his coalition, got much of what he wanted in a speech delivered Tuesday by Mr. Trump at the Israel Museum that adopted much of the prime minister’s own worldview of a dynamic, democratic Israel courageously defending itself against enemies like Iran.

“Through it all, they have endured and, in fact, they have thrived,” Mr. Trump said. “I stand in awe of the accomplishments of the Jewish people, and I make this promise to you: My administration will always stand with Israel.”

That prompted a standing ovation, and Mr. Netanyahu to shake his hand.

Mr. Trump went on to note that Iran has committed itself to Israel’s destruction.

“Not with Donald J. Trump, believe me,” he declared, and again the audience responded vigorously.

And though the trip was largely focused on Israel, Mr. Abbas, struggling to maintain sway after years in power, got at least some of what he wanted as he hosted Mr. Trump in Bethlehem as a seeming equal. Mr. Trump’s trip and hourlong meeting with Mr. Abbas had all the pomp of a state visit — a quickly corrected public schedule from the White House even referred to “Palestine,” which many Israelis object to as a recognition of a Palestinian state — with little of the public chiding Israelis might have liked.

Mr. Abbas, who met with Mr. Trump this month in Washington, repeated “our commitment to cooperate with you in order to make peace and forge a historic peace deal.”

In the byzantine world of Middle East peacemaking, the White House calculation appears to be that lack of clarity may be a good thing at this early stage. Mr. Trump’s advisers say that instead of pressuring and dictating, the way former Secretary of State John Kerry did during past failed peace efforts, ambiguity leaves them room to maneuver.

The question is whether the gauzy talk of hope and optimism can break through monstrously tall barriers to peace. Neither of Mr. Trump’s partners moved even an inch from their long-held positions and used their American guest in separate meetings to lash out at each other.

Some analysts suspected that they simply told Mr. Trump what he wanted to hear about working for peace, smiled as they showed him to the door and sent him on his way while they returned to the status quo at home.

But Isaac Herzog, the opposition leader and the head of Israel’s Labor Party, said that Jared Kushner, Mr. Trump’s son-in-law and adviser on the Middle East, had told him that the United States intended to follow up quickly with a process moving toward an agreement. Israeli and Palestinian officials were mum about private talks.

“Is anything behind all of this? That, only the prime minister knows,” said Mitchell Barak, an Israeli pollster and former political adviser.

Of Mr. Trump, he said: “This is probably the way he did business. From what I can see, he goes into a meeting, he puts on a show. He’s the Liberace of world leaders.”“Then he leaves it to Greenblatt, Friedman and Kushner and says, ‘Close it,’” Mr. Barak said, referring to two of Mr. Trump’s private lawyers, Jason Greenblatt and David M. Friedman, whom he has made, respectively, his main envoy to the region and the American ambassador to Israel.

Decades of American-led peacemaking has resulted in little when it comes to a deal with the Palestinians. But there is precedent for strict secrecy in the early stages, if that is what is happening.

Israeli and Palestine Liberation Organization officials met secretly in hotel rooms and country estates and came up with the principles that led to the Oslo Accords in the early 1990s, with the Norwegians acting as a conduit. The Americans were not actively involved. The Israeli-Jordanian peace treaty signed in 1994 was also the culmination of decades of secret bilateral contacts.

Mr. Trump’s speech at the Israel Museum was so friendly and considerate of Israeli emotions that one right-wing Israeli legislator described it as deeply expressive of the “Zionist narrative.” But some Israeli analysts say such a warm embrace can be conducive to building the trust necessary for a meaningful process.

“The message that comes out of this speech reflects the whole goal of the trip,” Prof. Avi Ben-Zvi, an expert on Israeli-American relations at Haifa University, said in a radio interview. If a regional peace initiative does begin to crystallize, he said, “Israel will have to pay a price, a painful, harsh compromise. Israel will only be able to make such a compromise from a position of confidence — confidence in Trump’s leadership and the confidence that the United States will be behind it.”

If there is any substance, secrecy may be all the more essential for Mr. Netanyahu because most of his current cabinet members oppose any far-reaching concessions to the Palestinians or the establishment of a Palestinian state. And several were gleeful that Mr. Trump pointedly avoided referring to a two-state solution that most of the prime minister’s allies oppose.

“The president spoke about peace six times, and in all, he avoided supporting a Palestinian state, which would undoubtedly be an obstacle to achieving that goal,” said Naftali Bennett, Israel’s education minister, who advocates going so far as to annex areas of the West Bank.

“A good visit,” said Michael Oren, a former Israeli ambassador to the United States and a historian. “Now we will see how we will build on it.”