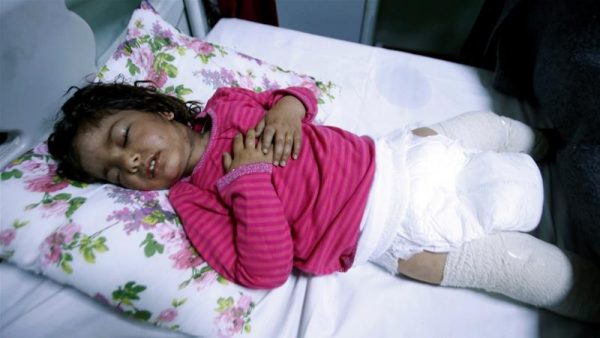 Dima Nadm Hamid is being treated for possible exposure to toxic agents [Azad Lashkari/Reuters]
Share:
Syria is reportedly still making chemical weapons and Russia and Iran know about it, a western intelligence agency told the BBC,

The intelligence document obtained by the BBC says that President Bashar al-Assad’s regime is producing chemical and biological weapons at three sites: Dummar and Barzeh, which are outside of Damascus, and in Masyaf, which is in Hama province.

The three sites are branches of the Scientific Studies and Research Centre (SSRC), which Assad claims is a civilian research institute. The document says that the Masyaf and Barzeh facilities specialize in installing chemical weapons on long-range missiles and artillery.

The west has accused the regime of dropping sarin gas bombs on the town of Khan Sheikhoun on April 4, killing at least 87 people, many of them children. In response, the US launched a salvo of 59 Tomahawk missiles on a Syrian airbase on April 7.

Three weeks after the  Khan Sheikhoun bombing, the US also placed economic sanctions on 271 SSRC employees and accused the research center of developing non-conventional weapons.

The document says that the chemical weapons are being made in areas closed off to the Organisation for the Prohibition of Chemical Weapons (OPCW).

The OPCW mentioned Barzeh and Dummar in its latest official progress update on its work to eliminate Syria’s chemical weapons program, but said it was still awaiting lab reports from samples taken between Feb. 26 and March 5.

The OPCW also told the BBC that it had asked Syrian authorities to “declare the relevant parts” of the SSRC sites, which is required by the Chemical Weapons Convention (CWC), an international treaty prohibiting their use. While Syrian authorities have declared parts of those sites, the OPCW said it was “not yet sufficient.” The OPCW also said it was “not yet in a position to confirm that the [Syrian] declaration is complete and accurate.”

Assad denied responsibility, saying that the Khan Sheikhoun chemical attack was “100% fabrication,” despite mounting evidence to the contrary.

He also claimed that Syria has not had chemical weapons since 2013, when it agreed to have them destroyed as part of a deal brokered by the US and Russia. Prior to the deal, hundreds of people were killed in a chemical attack near Damascus.

But a 2016 OPCW report said that “Syria has not yet adequately explained the presence of indicators of four chemical weapons agents.”

Russia, Turkey and Iran recently signed a deal to setup “de-escalation zones” in Syria — areas where certain air forces will not be allowed to fly — which starts Saturday morning at midnight. Although the full details have yet to be released, US warplanes will not be allowed in the zones.