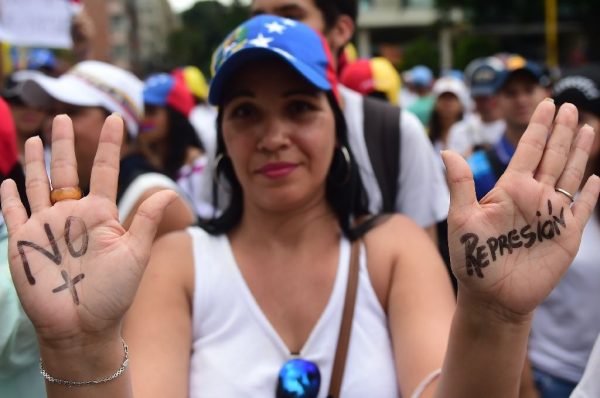 The rally, led by opposition leaders and lawmakers, saw women dressed in white head toward the interior ministry to denounce “repression” in the past five weeks by teargas-firing security forces against demonstrators.

Similar rallies were held in other cities.

They were the latest in more than a month of anti-government demonstrations, many of which have been countered by pro-Maduro crowds and security forces.

The death toll since April, when the protests intensified after Maduro’s administration and the courts stepped up efforts to undermine the opposition, is at least 36 according to prosecutors.

“The dictatorship is living its last days and Maduro knows it,” one former lawmaker in the Caracas march, Maria Corina Machado, told AFP.

“That’s why there are these unprecedented levels of repression,” she said.

The last fatality in Venezuela’s unrest, that of a 22-year-old man, occurred Friday during looting in impoverished Venezuelan cities hardest hit by a worsening economic crisis. In Valencia, where the man died, some areas looked like a disaster zone with bars on shop windows bent and windows broken.

Demonstrators blame Maduro for the country’s plight and the penury of food and medicine. They are demanding elections to remove the leftist president.

Maduro, backed by the Venezuelan military, is resisting. He and the opposition have blamed each other of using armed groups to sow violence.

The president has started a process to rewrite the current constitution brought in under his late predecessor and mentor Hugo Chavez. The opposition and many protesters say that is a tactic to try to dodge elections.

With anger boiling over, young protesters in the western municipality of Rosario de Perija on Friday burned, pulled down and then smashed a statue of Chavez, according to video posted on social media.

“The regime is falling,” she said outside the prison near Caracas where she demanded in vain on Friday to see her husband.

“It has no strength and is showing its worst side, using weapons because it is does not have right on its side.”

Maduro and his officials say the crisis rocking the country is a US-backed conspiracy designed to topple him and install a right-wing government.

The United States, which had been relatively muted over the situation in Venezuela, on Saturday took a stronger tone.

Expressing deep concern about the “violent crackdown on protestors,” the US ambassador to the UN, Nikki Haley, said in a statement that Maduro’s “disregard for the fundamental rights of his own people has heightened the political and economic crisis in the country.”

She called for him to listen to his people, and urged the immediate release of “political prisoners,” including Lopez who has been “held on trumped up charges by the government since 2014.”

Haley also raised the issue of Venezuela’s detention of an American, Joshua Holt, who was arrested nearly a year ago.

US media had reported that Holt, a Mormon former missionary recently married to a woman living in Caracas, was taken away by police who allegedly planted weapons in his apartment.

Haley said the US was “troubled by reports about the health of those held in Venezuela’s prisons, including US citizen Joshua Holt. We again call on the Venezuelan government to release Mr. Holt on humanitarian grounds.”