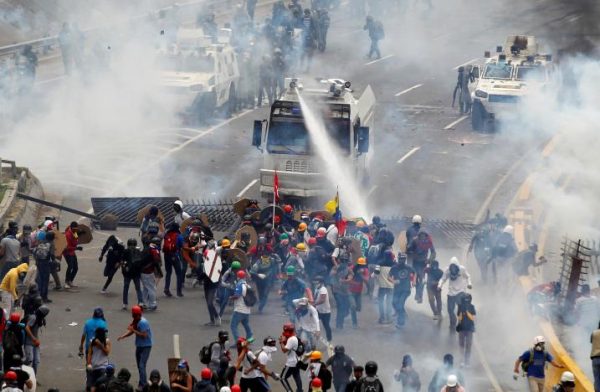 Opposition supporters clash with riot police during a rally against President Nicolas Maduro in Caracas, Venezuela, May 3, 2017. REUTERS/Christian Veron
Share:
By Andrew Cawthorne and Alexandra Ulmer

CARACAS, Venezuelan security forces battled protesters who lit fires and hurled stones on Wednesday in rage at President Nicolas Maduro’s decree to create an alternative congress, with another fatality taking the death toll to 34 during a month of unrest.
In a familiar pattern in protests against the socialist government, thousands of opposition supporters rallied peacefully at first before being blocked, sparking fights around the city between masked youths and soldiers.

One 17-year-old protester died in the melee from an object that hit him in the neck, said Gerardo Blyde, a district mayor for the opposition.

“A young man with all his life ahead. He simply fought for a better country,” Blyde said on Twitter of the case which the Venezuelan state prosecutor’s office said it would investigate.

More than 200 people were injured as fights raged in various parts of the capital, Blyde and another opposition mayor said.

Marchers tried to reach the National Assembly legislature, where the opposition has a majority, to protest Maduro’s creation of an alternative “popular” congress viewed by foes as a ruse to dodge free elections and cling to power.

They were pushed back by National Guard troops with teargas, armored vehicles and riot shields on the Francisco Fajardo highway, which runs through the middle of the city.

“They are mobilized as if this was a war,” said opposition leader Henrique Capriles, broadcasting from the scene via the Periscope app favored by protest leaders.

On the opposition side, youths donned gas masks and bandanas, throwing Molotov cocktails and using slingshots to fire stones. They protected themselves with homemade shields, painted in bright colors and decorated with slogans like “Liberty!” and “Murderer Maduro!”

With demonstrators erecting barricades and police helicopters whirring overhead, at least three opposition lawmakers were injured, activists said. “An injury by the dictatorship is a badge of honor,” tweeted First Justice legislator Freddy Guevara, who said he was hit by a tear gas canister.

Opposition leaders have vowed to stay in the streets after Maduro’s announcement on Monday that he was creating the “constituent assembly” which is empowered to rewrite the constitution.

“It’s a tool to avoid free elections. We’ve been marching 18 years but this is our last card. It’s all or nothing,” said pensioner Miren Bilbao, 66, with friends and family on the Francisco Fajardo highway.

Maduro, 54, the former bus driver who narrowly won election to replace Hugo Chavez in 2013, says his foes are seeking a violent coup with the connivance of the United States and encouragement of international media.

Officials say violence around the protests, and the opposition’s unwillingness to hold talks, left Maduro with no choice but to shake up Venezuela’s governing apparatus.

During a meeting with election officials on Wednesday, Maduro said a vote for the new assembly would take place in coming weeks. At least half of the members would be chosen by grassroots groups including workers, indigenous people and farmers, and the rest in a vote, Maduro has said, although details remained fuzzy.

“The new constituent process starting today will consolidate the Republic and bring to the nation the peace that we all deserve,” he said, clutching a pocket-size blue constitution and later dancing to the beat of drums.

“The Republic must defend itself from terrorism,” he added, joining supporters in a rally downtown after presenting his plans to the national election board, which backed the move.

The opposition is seeking to hold state gubernatorial elections delayed from 2016 and bring forward the 2018 presidential vote amid a devastating economic crisis.

It says Maduro’s use of a “constituent assembly” is a cynical ploy to confuse citizens into thinking he has made concessions when in fact he is seeking to tweak the system to avoid elections the Socialist Party would likely lose.

Maduro’s move has drawn condemnation from the United States and some Latin American countries, including regional powerhouse Brazil that labeled it a “coup.”

An influential group of U.S. senators filed sweeping legislation on Wednesday to address the crisis in Venezuela, including sanctioning individuals responsible for undermining democracy or involved in corruption.

But backing has come from regional leftist allies including Cuba. Bolivia’s President Evo Morales said Venezuela had the right to “decide its future… without external intervention.”

On top of the latest death on Wednesday, officials announced four more fatalities on Tuesday.

Two people died when a vehicle tried to avoid a protester barricade in the state of Carabobo, Venezuela’s Civil Protection agency tweeted late on Tuesday.

Angel Moreira, 28, who was on a motorbike on a highway leading out of Caracas, also died after a vehicle ran him over while trying to avoid a demonstration, the state prosecutor’s office said on Wednesday.

In addition, the office said Yonathan Quintero, 21, had been killed while a group was “damaging” a business after a protest in the Carabobo state capital of Valencia.

Energy Minister Luis Motta said late on Tuesday “a right-wing terrorist plan to paralyze the country” had cut a submarine cable that provided electricity to the palm-tree-studded Caribbean island of Margarita, plunging it into darkness.

The president of state oil company PDVSA, Eulogio Del Pino, said “terrorists” had captured a company tanker truck in the western state of Lara, tweeting pictures of it in flames.

The opposition scoffs that an inept government blames Maduro critics as a smokescreen for rampant crime and lack of maintenance that have Venezuela’s infrastructure creaking.