Peru’s Amazon natives took over oil field, demanded payment for use of the land 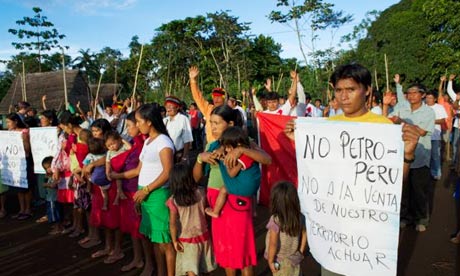 Peru’s Amazon natives took over oil field and protested against use of their land
Share:
About 600 natives of Peru’s Amazon region took control of a non-producing oil field operated by Canada’s Pacific Exploration & Production Corp and demanded payment for use of the land, a representative of the protesters said on Tuesday.

The field, oil lot 192 near the Ecuadorean border, has been idle since last year due to pipeline ruptures. Pacific Exploration & Production said a group of 30 indigenous people began the protest on Saturday.

Wilmer Chavez, president of the Oriap indigenous organization, told Reuters by telephone that the number of protesters had grown since then to 600.

“We have to make them respect our territory,” he said.

In an email to Reuters, Pacific Exploration & Production said the field is near 19 indigenous communities, 18 of which have signed land use deals with the company.

“No payment is due at this time,” the email said.

Chavez said two communities, Los Jardines and Alianza de Capahuari, have no agreements with the company and are demanding $308,000 as compensation for use of their lands.