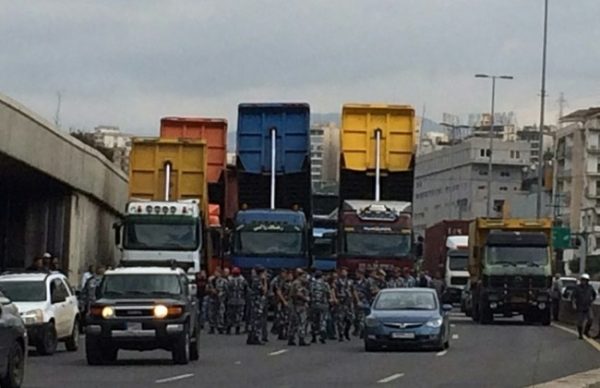 NNA said the truckers blocked the Ouzai-Kuwaiti Embassy road as well as the Safra-Jounieh, Dahr al-Baydar, and Zahle-Tarshish roads, causing severe traffic jams on the capital’s entrances and in Bekaa and Zahle.

The Khalde-Beirut highway was also blocked by truckers, bringing traffic to south Lebanon to a standstill

Trucks also blocked the coastal highway at Jadra’s intersection on the Beirut-South highway.

The road-blocking protest in Khalde involved a clash between truckers and citizens that escalated into gunfire and the smashing of a car’s windows.

“I demand the reopening of roads across Lebanon within an hour or else I will be obliged to use force,” Mashnouq warned on Twitter.

The minister later called for a Wednesday afternoon emergency meeting for the Central Security Council at the Interior Ministry.

“We reopened some roads and I pledge to reopen all roads as of tomorrow and we will take all measures necessary to prevent their closure. This issue will not be repeated and we will not bow to any blackmail,” Mashnouq said later in remarks to al-Jadeed television.

“I hope this issue will be discussed without politicization and the law will be implemented as of tomorrow,” he added.

Mashnouq also called on President Michel Aoun to “convene a cabinet session to discuss the issues that are of importance to citizens, away from the political conflict over the electoral law.”

Similarly Speaker Nabih Berri was reportedly outraged over the road blocking by the truckers
“Speaker Berri was outraged and he condemned the blocking of roads today at the hands of truck owners, while also renewing his stance on the stone crushing and sand mining sites that have ‘defaced nature and harmed the environment’,” MPs quoted Berri as saying during his weekly Ain el-Tineh meeting with lawmakers.

There are strict environmental guidelines in Lebanon for sand mining and stone crushing, but the owners of these sites are reportedly not complying with these guidelines and are defacing nature and harming the environment.

On the other hand some media reports have accused Berri of having a hand in several of the street protests that the country witnessed this week, linking them to the parliament speaker’s dispute with President Michel Aoun and the Free Patriotic Movement.