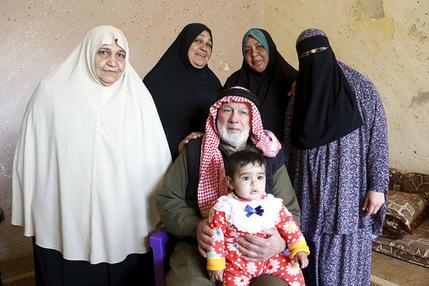 In this photo taken Wednesday, Feb. 18, 2017, five generations of a Palestinian refugee family, the Abu Massouds, pose for a portrait. From left to right (standing): Bassama Abu Massoud, 72; her daughter Hanaa, 50; Hanaa’s daughter, Abir, 33; Abir’s daughter, Ala, 18. Patriarch Abdullah Abu Massoud, 77, sits in a chair, holding his 9-month-old great-great-granddaughter, Tuqaa, in his lap. The plight of Palestinians uprooted by Israeli-Arab wars is one of the longest-running refugee crises. As the second wave of displacement hits the half-century mark, a solution for millions of refugees and their descendants is more distant than ever. (AP Photo/Raad Adayleh)
Share:
BY KARIN LAUB
As a boy, Palestinian Abdullah Abu Massoud fled the war over the birth of Israel in 1948 and sought refuge in the nearby Gaza Strip.

As an adult, Abu Massoud was displaced again when Israeli forces captured Gaza, along with the West Bank and east Jerusalem, in 1967. He escaped to Jordan, where he has been living in a refugee camp for 50 years.

Now 77, Abu Massoud is the white-haired patriarch of a refugee family spanning five generations, including a great-great-granddaughter. The future looks bleak.

This is the second of several stories marking 50 years since Israel captured the West Bank, Gaza Strip and east Jerusalem in 1967.

The plight of Palestinians uprooted by Israeli-Arab wars is one of the world’s longest-running refugee crises, and a solution would likely require setting up a state of Palestine that would take in large numbers of them. Such a solution appears distant, even as President Donald Trump says he wants to try to broker an Israeli-Palestinian agreement.

Meanwhile, hundreds of thousands of Palestinians are being displaced again by regional conflicts, including civil war in Syria. The head of the U.N. Relief and Works Agency (UNRWA) which helps displaced Palestinians said they are no longer the world’s focus.

“We are dealing here with a community that has essentially reached a crisis of existential nature,” said Pierre Kraehenbuehl.

Abdullah Abu Massoud was born in a Bedouin encampment in what is now Israel. His family fled Israeli forces during the war over Israel’s creation, walking to Egyptian-run Gaza. More than 700,000 Palestinians were uprooted at the time.

In his 20s, Abu Massoud married Bassama, an Egyptian, and settled in Gaza.

Bassama, 72, said that after Israel’s capture of the territory in 1967, Gaza residents began talking of leaving, fearful of what Israeli rule might bring. Israel was offering transportation to Jordan, Bassama said.

In April 1968, the Abu Massouds and other displaced Palestinians from Gaza boarded a truck to Jordan’s border. From there, they took buses to an area near the town of Jerash where UNRWA was setting up a tent camp. Bassama remembers her feet sticking out of the tiny tent while she slept.

Under U.S. proposals in previous Israeli-Palestinian talks, a Palestinian state created from lands Israel captured in 1967 would welcome families like the Abu Massouds. In addition, an agreed upon number of refugees would be allowed to return to Israel and others could opt to stay in their host countries.

But disagreements remained, and talks failed. Palestinians wanted Israel to accept moral responsibility for the plight of refugees. Israel feared this would lead to a large-scale return to Israel and dilute its Jewish majority.

There have been no serious negotiations since gaps widened with the 2009 election of Benjamin Netanyahu as Israel’s prime minister. Continued Israeli settlement expansion made a partition deal more difficult.

Today, 5.3 million Palestinians and their descendants are registered with UNRWA in Jordan, Lebanon, Syria, the West Bank and Gaza Strip, making them eligible for health and education services. Some in Netanyahu’s government allege UNRWA and others perpetuate the refugee problem artificially. U.N. officials say refugee status is typically handed down through the generations in protracted conflicts.

A 29-year-old grandson of Bassama and Abdullah, Alaa Abu Awad, has never set foot in historic Palestine, the land between the Mediterranean and the Jordan River. But he clings to an idealized image of Gaza to help him deal with his statelessness. He has tacked a Palestinian flag to the wall of his shop in Jerash camp.

“It’s the flag of my homeland,” said Abu Awad.

Most Palestinians in Jordan received citizenship as descendants of refugees from the neighboring West Bank, which was under Jordanian control for two decades, until 1967. The offspring of those who arrived from Gaza – more than 150,000 – are still temporary residents. They can’t own property and are barred from government jobs.

This has curtailed opportunities.

Alaa Abu Awad dropped out of school because there was no payoff for an education. As a tailor, he struggles to feed his family. Business has slowed because of rising prices and unemployment. He fears he’ll spend his life in the camp.

Circumstances vary for displaced Palestinians like the Abu Massouds.

Fewer than 30 percent live in U.N. camps. Many are poor. Others became successful; Palestinians helped drive economies in Jordan and elsewhere in the Middle East.

In Lebanon, refugees cannot access public health or schools and are barred from most skilled professions.

Most of the 2.2 million UNRWA-registered Palestinians in Jordan have citizenship, arguably ending their refugee status. Others say Jordan did this as a temporary protection measure.

In Palestinian-run areas of the West Bank and Gaza, descendants of refugees have the same rights as others. Pinned down by poverty, many remain in camps, which have been hotbeds of unrest against Israel and resentment against the Palestinian ruling elite.

Life in Jerash has changed the women.

Unlike Bassama’s generation, the younger women wear face veils, signaling that a more fundamentalist version of Islam is taking root. The women say being covered head to toe also offers protection in the crowded camp.

Privacy is rare. In the Abu Massoud home, Bassama typically sits on a floor cushion, overseeing young female relatives as they cook and clean.

She accepts her refugee life as fate. She did her best to provide a home for their seven children, all now married.

Bassama has no hope of return and expects to be buried in the camp’s rundown cemetery.