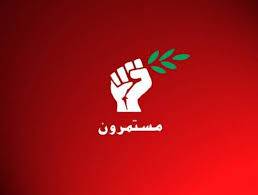 The March 14 activists , the” Moustamerroun group ” accused on Wednesday some of the political parties of “stoking sectarian sentiments” in order to “deviate the attention of the Lebanese from the corruption scandals that have exposed the true nature of the ruling class.”

It pointed out that some parties want to “create Christian, Sunni and Druze duos that emulate the Shiite duo.”

“What the Lebanese want is a true democracy and that can only be achieved through comprehensive pluralism across Lebanon and inside all sects,” the March 14 activists added.

These policies “are based on replacing the constitution by settlements, the law by deals, legitimate institutions by illegitimate arms, and democracy by the balance of power that Iran is imposing on Lebanon through Hezbollah’s weapons,” March 14 Moustamerroun added.

“The Lebanese are not suffering only from the extension of MPs’ terms but also from the extension of the mentalities of repression… that were born under Syrian occupation and are still being replicated at the hands of Hezbollah and those who are silent over its arms or are colluding with it,” the group went on to say on the crisis facing Lebanon over the Electoral law fiasco