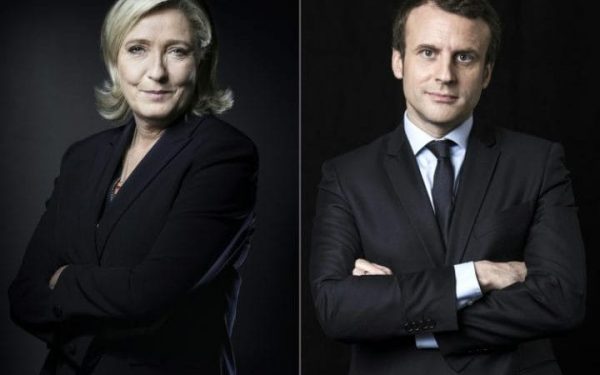 The two frontrunners in the French presidential election, far-right leader Marine Le Pen and centrist Emmanuel Macron, were staging rival rallies in Paris Monday, seeking to stay ahead of a fast-chasing pack just days before the vote.

After weeks of twists and turns, the unpredictable race has narrowed dramatically, with surveys suggesting four candidates are in contention to win one of the top two spots in the April 23 vote and progress to the run-off election a fortnight later.

Scandal-hit conservative Francois Fillon and radical leftist Jean-Luc Melenchon are steaming up behind the two frontrunners, and with around one in three of the French electorate still undecided, candidates are scrapping for every vote.

Le Pen and Macron, who have both scored as high as 25 percent in voter surveys, stood at 22 percent in the latest IPSOS poll, while Melenchon has surged to 20 percent and Fillon stands at 19.

Melenchon’s late surge — and the possibility he could square off against Le Pen in the May 7 decider — has sparked alarm over the future of the EU, as both candidates advocate withdrawing from the bloc for different reasons.

Outgoing President Francois Hollande weighed in on Saturday, saying Europe has “protected us against war” in the decades since World War II.

“Let us preserve it instead of scapegoating it,” he said at a World War I centenary event in northern France.

Macron plans his biggest rally yet at the Bercy sports and concert hall, a venue with a capacity of 20,000.

The location near the economy ministry serves as a reminder that the relatively inexperienced Macron held the key economy portfolio for two years under his mentor Hollande.

The 39-year-old former Rothschild banker quit the Socialist government last year to form his “En Marche” (“On the Move”) party and launch his bid for power as a candidate “neither of the left nor of the right”.

En Marche says it has planned “1,000 events a day” including 163 public rallies until the official end of campaigning at midnight on Friday.

An aide to Macron said he would use Monday’s event to hit back at Le Pen’s accusation he is soft on Islamists.

“With Mr Macron, it would be Islamism on the move,” Le Pen, 48, said on Saturday in response to revelations that one of Macron’s top campaigners had criticised the Charlie Hebdo satirical weekly for publishing cartoons of the prophet Mohammed.

Le Pen’s own rally will be at the 6,000-capacity Zenith concert hall in northeast Paris, with activists saying they plan protests outside the venue.

A protest is also expected in the southern port of Marseille on Wednesday where Le Pen plans another large rally.

Melenchon, 65, plans a quirky event that will see him board a barge in a northeast suburb of the French capital and float down a canal, making five stops along the way to meet and greet supporters.

The voyage lasting more than five hours will end up at the Francois Mitterrand Library, a nod to the Socialist leader of the 1980s and early 1990s whom Melenchon references frequently in his stump speech as an icon of the left.

The founder of “La France Insoumise” (“Unbowed France”) plans another form of multiple appearances on Tuesday, where he will hold a rally in central Dijon while his hologram will speak for him in six other cities.

For his part Fillon, dogged by a fake jobs scandal that has seen him charged with abuse of public funds, is vowing to pull off a victory that will “surprise the microcosm” arrayed against him.

He believes a small coterie of detractors mounted a campaign to smear him with the revelations that he put his wife Penelope on the public payroll with jobs that earned her hundreds of thousands of euros (dollars).

Fillon, who led the race for weeks before the scandal broke in late January, spent Easter weekend wooing the Catholic and conservative vote.

Conspicuous by his absence at the height of the scandal, the 63-year-old former prime minister has revved up his campaign appearances in the past week.

Russian President Vladimir Putin reportedly has a plan for destroying the West. Over the past decade, Russia has boosted right-wing populists across Europe. It loaned money to Marine Le Pen in France,well-documented transfusions of cash to keep her presidential campaign alive.

There’s a clear pattern: Putin runs stealth efforts on behalf of politicians who rail against the European Union and want to push away from NATO. He’s been a patron of Golden Dawn in Greece, Ataka in Bulgaria, and Jobbik in Hungary. Joe Biden warned about this effort last year in a speech at the Brookings Institution: “President Putin sees such political forces as useful tools to be manipulated, to create cracks in the European body politic which he can then exploit.”

The destruction of Europe is reportedly a grandiose objective; so is the weakening of the United States.

Donald Trump, who was Putin’s declared favorite in the US election celebrated the United Kingdom’s exit from the EU. He denounced NATO . He is also a great admirer of Putin. In 2007, he praised Putin for “rebuilding Russia.” A year later he added, “He does his work well. Much better than our Bush.” When Putin ripped American exceptionalism in a New York Times op-ed in 2013, Trump called it “a masterpiece.” Despite ample evidence, Trump denies that Putin has assassinated his opponents.“

According to Politico’s Michael Crowley, Russian propaganda promoted Trump, using its Russia Today apparatus to to thrash Hillary Clinton and hail the courage of Trump’s foreign policy. Russian intelligence services hacked the Democratic National Committee’s servers, purloining its opposition research files on Trump and just about everything else it could find. They also wormed their way into the computers of the Clinton Foundation, a breach reported by Bloomberg. And though it may be a mere coincidence, Trump’s inner circle is populated with advisers and operatives who have long careers advancing the interests of the Kremlin.