Trump signals Steve Bannon could be on his way out 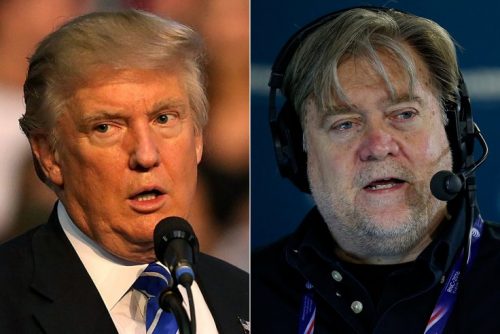 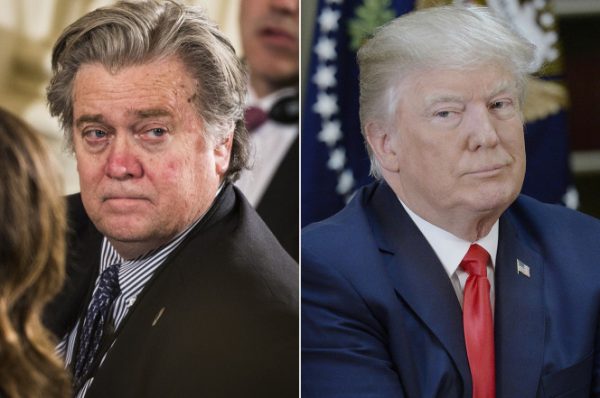 Could a real shake-up be coming soon to the Trump White House — and is his chief strategist Steve Bannon the one on the outs?

The president sounds fed up with the infighting, and he appears to be picking sides — predictably with his family. In an interview with the New York Post’s Michael Goodwin, Trump seems to push away Bannon.

“I like Steve, but you have to remember, he was not involved in my campaign until very late,” Trump said. “I had already beaten all the senators and all the governors, and I didn’t know Steve. I’m my own strategist, and it wasn’t like I was going to change strategies because I was facing crooked Hillary.”

That is brutal. Bannon, the former head of the right-wing website Breitbart with a very particular world view, was brought on in August of 2016 and named the campaign’s “CEO.”

He was kept on when Trump won the presidency as White House chief strategist and has been seen as an inspirational leader for Trump — populist, nativist and anti-globalist. Bannon’s fingerprints are everywhere, from Trump’s “America First” doctrine to the dark vision laid out in his inaugural address. He even put himself on the Principals Committee of the National Security Council, an unprecedented and unusual step for the president’s top political strategist.
But Bannon clashed with the wrong person, Trump’s son-in-law Jared Kushner.

Kushner enjoys a broad portfolio in the White House and, most importantly, influence with Trump. He’s married to Trump’s elder daughter, Ivanka, who always has her father’s ear — and now a West Wing office, too. She reportedly is “angrier than anyone.”

The president ordered Kushner and Bannon to sit down and work things out Friday at Mar-a-Lago. Trump confirmed that to Goodwin, and in the process, may have revealed which side he’s on.

“Steve is a good guy,” the president said, “but I told them to straighten it out or I will.”

It’s a remarkable turn of events for someone like Bannon, who seemed to rise in Trump’s orbit quickly, only to, like Icarus, have his wings melt away when he got too close to the sun.

Bannon has always been a controversial figure, having touted Breitbart as “the platform for the alt-right,” which is closely aligned with white nationalism.

The Trump campaign had difficulty balancing the fact that white nationalism, and white supremacists, were supportive of Trump and the need to push back against them publicly. Trump’s campaign team, even after the election, angrily denied that it had given a boost to racists. But Trump’s campaign and he himself repeatedly (his team says unwittingly) retweeted or used alt-right memes.

Trump appears to be moving away from the rigid ideology of Bannon’s grandiosity and more toward a more traditional Republican posture — and the alt-right doesn’t like it.

As the Kushner-Bannon rivalry percolated in the media for a few days, the Anti-Defamation League issued a press release Monday headlined, “Explosive Growth of Hateful Memes and Anti-Semitic Conspiracy Theories Against Jared Kushner.”

“This campaign of anti-Semitism has been driven by white supremacists and anti-Semites and has all the hallmarks of classic Jewish conspiracy theories. The narratives include accusations that Jews in the Trump Administration are trying to start a war to advance the interests of Israel. They contend that Trump has abandoned his ‘America First’ policy, which the alt right supported, because he is being manipulated by Kushner and other Jewish advisors.”

Kushner is Jewish. Reporters and those who spoke out against Trump during the campaign reported repeated online harassment. The ADL noted the use of hashtags on Twitter like #firekushner, #kushnerswar and #Syriahoax, which began to appear a week ago.

Trump’s comments to the New York Post also come amid a backlash aimed at White House press secretary Sean Spicer, who on Passover Tuesday said Syria’s Bashar Assad was worse than Hitler, because Hitler didn’t use chemical weapons “on his own people.”

Spicer apologized (apparently to GOP mega-donor Sheldon Adelson as well), but it’s not his first flub. Given Trump’s comments about Bannon, you wonder if he’s in an itchy mood and looking to shake things up all around as the 100-day mark approaches. No president uses one press secretary for his entire presidency. President Obama had three over eight years (two in his first term); George W. Bush and Bill Clinton both had four (and also two in their first terms).

Don’t mess with the family

In the campaign, Trump had seemed taken with Bannon’s verve and willingness to fight. His confrontational tactics appealed to Trump and played into the machismo he was offering up at packed rallies on the campaign trail.

It was Bannon, you might remember, who ordered up the bringing of Bill Clinton’s former accusers of sexual misconduct to a national debate. They held a mock press conference beforehand and got close-up seats to the debate. All the while, Bannon, who shied away from media interviews, stood on the sidelines.

Trump’s “lock her up” base ate it up.

But Bannon’s influence began to be scrutinized. Three weeks into Trump’s presidency, Time magazine put him on its cover as “The Great Manipulator” and asked if he was “the second most powerful man in the world.”

Bannon should have learned that while his tactics might appeal to Trump, he should never direct his efforts at Trump’s family. Remember, a family meeting was partially responsible for Corey Lewandowski’s firing as campaign manager in the primaries.

“[Corey] knew there was a battle brewing. I am certain he thought he would win,” a source told NPR last summer.

For years, Bannon made his money in Hollywood. Well, as Michael told Fredo in The Godfather: “Don’t ever take sides with anyone against the family again. Ever.”

Of course, the wild card here is this: If Bannon is eventually ousted, does he train Breitbart’s sights on Trump?