In a sharp split with US, Russia vetoed UN resolution condemning Syria killings 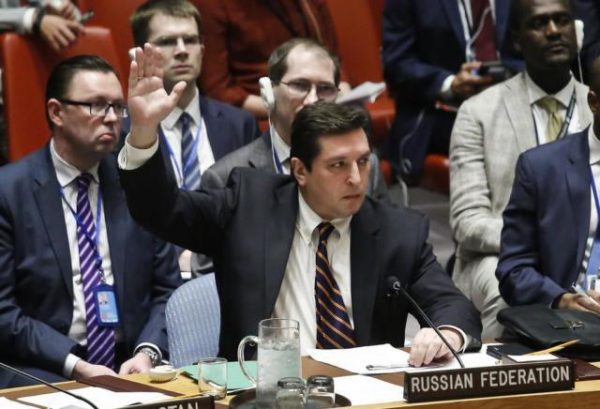 Russia vetoed a UN resolution condemning the killings, believed to have been carried out with sarin gas, and calling on Moscow ally Syria to cooperate with an international investigation of events on the ground.
It was the eighth Russian veto of a resolution on Syria throughout the course of its civil war.
US Ambassador to the UN Nikki Haley told the council that “with its veto, Russia said no to accountability, Russia said no to cooperating with the UN investigation, Russia said no to helping keep peace in Syria, Russia chose to side with (Syrian President Bashar al-) Assad, even as rest of the world, even the Arab world, comes together to condemn the murderous regime.”
It was the latest sharp split between the US and Russia over the incident, which has deepened antagonism between the two countries in the wake of the attack. Moscow has strongly objected to a US strike against the Syrian air base the West believes the sarin attack was launched from.
Russia vetoed the measure just hours after US Secretary of State Rex Tillerson huddled with Russian President Vladimir Putin for two hours in Moscow. Diplomats said Russia came close to proposing its own resolution, which would have included language condemning the US missile strikes in Syria last Thursday.
China, which has also vetoed several resolutions in the past along with Russia, abstained on this one — a move welcomed by President Donald Trump at a White House news conference. The Chinese UN ambassador later said it was regrettable that agreement could not be reached. Bolivia also voted no, but the South American country does not have veto power like Russia.
Russia said the US, UK and France, who backed the resolution, rushed to judgment. Deputy Russian UN Ambassador Vladimir Safronkov told the council that “the main problem was that the draft resolution by the Troika appointed the guilty party prior to the investigation, prior to an independent and objective investigation. Now this is an approach incompatible with the legal norms.”
But Louis Charbonneau, UN director at Human Rights Watch, condemned the veto and Putin.
“Russia’s veto exposes the hollowness of Putin’s call yesterday for UN investigations,” he said in a statement. “Security Council members should have found compromise language that would have ensured an immediate investigation at the site of last week’s attack.”
Haley warned the Syrian regime to “watch this vote closely.” She said the days of excuses by the regime are over.
Syria’s UN Ambassador Bashar Ja’afari responded by telling the council that “whoever reads today’s resolution carefully would realize that the genuine, true objective is not to uncover the truth, it is to violate Syrian sovereignty, to abuse and use any information that can be collected through the draft resolution.”
The resolution would have compelled the Syrian government to provide helicopter pilots for interviews with international inspectors and flight logs that could provide evidence of flights in the air over the city where the gas attack took place.
UK Ambassador to the UN Matthew Rycroft said after the vote that “regardless of the veto today, trust these words: We will hold the regime to account. We will continue to work with our international partners to put an end to the use of chemical weapons.”
Rycroft was among the Western ambassadors who blasted Russia earlier Wednesday for continuing to support Assad even after his alleged use of sarin on a rebel-held area of his country.
He accused Assad by name at a planned morning session on Syria.
“We’ve met over the horror, hoping Assad has reached his depths, and yet every time, he’s plunged to new lows,” he said. The Syrian people “have suffered six years of ever-escalating barbarity, over six years of failed ceasefires, and over the years, Russia has held us ransom for the Assad regime.”
However, Ja’afari, the Syrian envoy, dismissed as “lies” and “accusations” the notion that his country used “a chemical weapon we do not even possess.”
After the session, the Syrian ambassador was asked by CNN to comment on President Donald Trump’s remarks in an interview that Assad was “an animal.”
“It’s really pitiful to hear such irresponsible and provocative statements from the most important leader in the Western world,” Ja’afari said. “I feel ashamed, I feel ashamed.”
All-time low

President  Trump says the U.S. is “not getting along with Russia at all” and relations between the two global powers are at an “all-time low.”

Trump said in a White House news conference that he’s hopeful he can improve relations with Russian President Vladimir Putin but “we’re going to see what happens.”

The president spoke alongside the secretary-general of NATO shortly after Secretary of State Rex Tillerson met with Putin in Moscow. Tillerson told reporters the two countries have reached a “low point” in relations in the aftermath of a chemical attack in Syria.

Tillerson says the United State is confident in its assessment that Syria used chemical weapons in a bombing last week and alleged that Syria has used such weapons more than 50 times in the past.

Last week’s attack prompted Washington to launch a barrage of Tomahawk missiles on a Syrian air base.