China ‘deploys 150,000 troops as US edges closer to war with North Korea 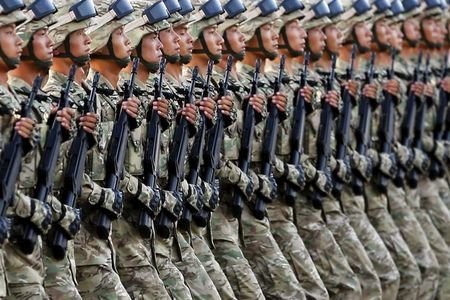 The Chinese army has reportedly deployed 150,000 troops to the North Korean border to prepare for pre-emptive attacks after the United States dropped airstrikes on Syria.

President Donald Trump’s missile strike on Syria on Friday was widely interpreted as a warning to North Korea.
And now China, left shocked by the air strikes, has deployed medical and backup units from the People’s Liberation Army forces to the Yalu River, Korea’s Chosun.com reported.

The troops have been dispatched to handle North Korean refugees and ‘unforeseen circumstances’, such as the prospect of preemptive attacks on North Korea, the news agency said.

Meanwhile, the US Navy has moved the USS Carl Vinson aircraft carrier strike group from Singapore to North Korea after the country conducted more missile testing.

China’s top nuclear envoy arrived in Seoul Monday for talks on the North Korean threat, as the United States sent the naval strike group to the region and signalled it may act to shut down Pyongyang’s weapons program.

Speculation of an imminent nuclear test is brewing as the North marks major anniversaries including the 105th birthday of its founding leader on Saturday – sometimes celebrated with a demonstration of military might.

The talks come shortly after Trump hosted Chinese leader Xi Jinping for a summit at which he pressed Pyongyang’s key ally to do more to curb the North’s nuclear ambitions.

‘(We) are prepared to chart our own course if this is something China is just unable to coordinate with us,’ US Secretary of State Rex Tillerson said after the summit.

He added however that Beijing had indicated a willingness to act on the issue.

‘We need to allow them time to take actions,’ Tillerson said, adding that Washington had no intention of attempting to remove the regime of Kim Jong-Un.

The meeting between Xi and Trump came on the heels of yet another missile test by the North, which fired a medium-range ballistic missile into the Sea of Japan on Wednesday.

The US Navy strike group Carl Vinson cancelled a planned trip to Australia this weekend, heading toward the Korean peninsula instead, in a move that will raise tensions in the region.

Seoul and Washington are also conducting joint military drills, an annual exercise which is seen by the North as a practice for war.

Pyongyang is on a quest to develop a long-range missile capable of hitting the US mainland with a nuclear warhead, and has so far staged five nuclear tests, two of them last year.

Satellite imagery analysis suggests it could be preparing for a sixth, with US intelligence officials warning that Pyongyang could be less than two years away from its goal of striking the continental United States.
DAILY MAIL