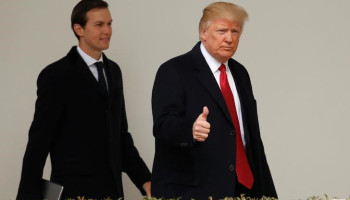 Kushner’s ascent to senior White House adviser has been met with ribbing from the media and scorn from liberals, who have cast him as a privileged boy wonder in over his head.

There are also questions about whether the breadth of Kushner’s reach — and his close relationship with the president — will worsen the staff infighting that has raged in the early months of Trump’s presidency.

But White House aides dismissed the notion that Kushner’s sphere of influence would become an issue, describing him as “deferential” and a “team player” who is working in tandem with Cabinet secretaries, agency heads and White House staff.

They describe Kushner as the model for the kind of entrepreneurial-minded talent the White House is trying to attract: someone who brings a new approach to the problems that have vexed Washington for decades.

“Jared has already had an extremely successful career as an entrepreneur,” a White House aide told The Hill. “Those are exactly the kinds of people we want working in the government, because they bring fresh perspectives, ideas and are hungry for new solutions.”

Kushner’s outsize role in the administration was clear on Monday as he landed in Iraq for a visit that the White House said came at the invitation of Gen. Joseph Dunford, the chairman of the Joint Chiefs of Staff.

The trip comes at a critical time for coalition forces in Iraq, leading some to question why Kushner is acting as U.S. emissary to the country instead of Secretary of State Rex Tillerson.

Press secretary Sean Spicer cast Kushner’s visit — his first ever to Iraq — as an opportunity for him to learn more about the region and to communicate the administration’s support to forces on the ground.

“Jared’s going specifically to express the commitment of the U.S. government to Iraq and to meet with personnel engaged in that campaign,” Spicer said. “He’s going over and getting a firsthand look at the work that’s being done, to thank the government of Iraq, and to see some of the sacrifice and progress our team is making. This is something that every official and member of the media should take advantage of if offered that opportunity.”

Beyond Iraq, Kushner has expressed interest in brokering a peace accord between the Israelis and Palestinians — a goal that has long eluded presidents from both political parties.

A White House aide told The Hill that Kushner is also involved in U.S. foreign policy as it relates to Canada, Mexico and China. Kushner was instrumental in brokering a meeting that will take place later this week between Trump and Chinese President Xi Jinping.

“It’s a lot to put on a young guy,” said Ian Bremmer, the president of the Eurasia Group, an international political consulting firm. “These are big issues with a wide range of potential outcomes, and there are questions about whether he can handle it. He doesn’t have the experience, but he’s a smart guy and a quick study and very much has the president’s trust.”

“Jared Kushner is an incredibly intelligent, trusted confidant of the president,” said one White House official. “The only people who would be alarmed are the permanent state that wishes to defend 16 years of disastrous Middle East policy from anyone not wedded to their intrinsically flawed views.”

Trump has tapped Kushner to lead the White House Office of American Innovation (OAI), a new program that will aim to overhaul the federal government’s technology infrastructure while also examining the government’s role in addressing opioid addiction and veterans affairs.

And last week, Kushner visited Capitol Hill to meet with senators about criminal justice reform, a thorny and complex issue.

“He’s overloaded, and the combination of overload and inexperience is worrisome,” said Dov Zakeheim, an undersecretary of Defense for former President George W. Bush.

Trump’s allies are not worried, calling Kushner’s work on the presidential campaign — his first foray into political consulting and advising — evidence that he learns fast on the job and has a knack for complicated projects.

Along the way, Kushner earned speechwriting credits, acted as an adviser on foreign policy, connected the campaign with industry leaders in the private sector and stepped in to “effectively act as the campaign manager” on scheduling and other nuts-and-bolts issues when called upon, former aides say.

“He is someone who had never before been involved in a political campaign and he jumped in and modernized the digital operations,” said Corey Lewandowski, Trump’s former campaign manager. “He’s exceptionally smart and quickly finds solutions for complex problems. The president has full faith in him. He’s been proven to be someone who can tackle a complicated project and be successful at it.”

White House aides say Kushner is even ready to work with New Jersey Gov. Chris Christie (R), whom Trump has asked to lead a commission to battle opioid addiction.

Media reports suggested that Christie was fired from the presidential transition team for botching the process. Yet some speculated that the change took place because Kushner still holds a grudge against Christie for prosecuting his father for tax evasion more than a decade ago.

“[Kushner] is a team player and a great manager who has built a team of really talented, capable individuals, many of whom he recruited,” said a White House aide. “He just wants to help and be supportive and amplify people’s strengths or be helpful if there’s a weakness. But he’s very much deferential and isn’t seeking attention or power. He’s content if he can work with others to get things done.”