In a departure from Obama’s stance U.S. no longer focused on ‘getting Assad out’ 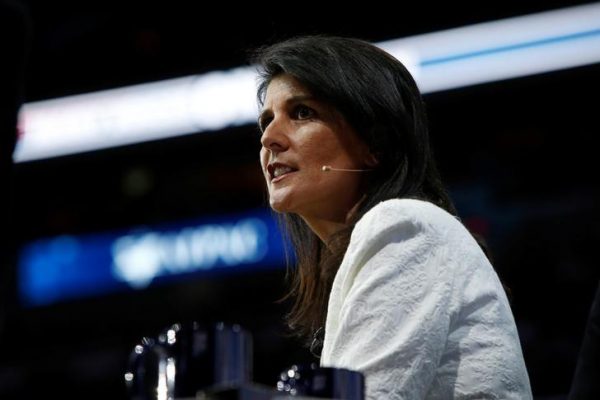 U.S. Ambassador to the United Nations NIkki Haley speaks in Washington, U.S., March 27, 2017. REUTERS/Joshua Roberts
Share:
By Michelle Nichols
NEW YORK- The United States’ diplomatic policy on Syria for now is no longer focused on making the war-torn country’s president, Bashar al-Assad, leave power, the U.S. ambassador to the United Nations said on Thursday, in a departure from the Obama administration’s initial and public stance on Assad’s fate.

The view of the Trump administration is also at odds with European powers, who insist Assad must step down. The shift drew a strong rebuke from at least two Republican senators.

“You pick and choose your battles and when we’re looking at this, it’s about changing up priorities and our priority is no longer to sit there and focus on getting Assad out,” U.S. Ambassador Nikki Haley told a small group of reporters.

“Do we think he’s a hindrance? Yes. Are we going to sit there and focus on getting him out? No,” she said. “What we are going to focus on is putting the pressure in there so that we can start to make a change in Syria.”

In Ankara on Thursday, U.S. Secretary of State Rex Tillerson said Assad’s longer-term status “will be decided by the Syrian people.”

The Obama administration, in its later years, was focused on reaching a deal with Russia that would eventually see Assad go, though it also shifted its focus to the fight against Islamic State militants, who captured swathes of territory in Iraq and Syria in 2014.

As presidential nominee, Donald Trump said defeating Islamic State was a higher priority than persuading Assad to step down.

“We can’t necessarily focus on Assad the way that the previous administration did,” said Haley, a former governor of South Carolina. “Our priority is to really look at how do we get things done, who do we need to work with to really make a difference for the people in Syria.”

On Wednesday, Haley accused Russia, Iran and the “Assad regime” of committing war crimes. She has also said the United States supports the U.N.-led Syria peace talks, that Syria could no longer be a “safe haven for terrorists” and that it was important “we get Iran and their proxies out.”

A senior Trump administration official told Reuters that Haley’s remarks reflected “a measure of just realism, accepting the facts on the ground. … Assad is never going to have sufficient force to reassert control over the whole country. … Our focus is on defeating ISIS and al Qaeda and preventing Syria from being used as a terrorist safe haven.”

But Republican Senators John McCain and Lindsey Graham, in separate, strongly worded statements, denounced the shift in the U.S. stance.

McCain, who chairs the Senate Armed Services Committee, said Tillerson’s statement “overlooks the tragic reality that the Syrian people cannot decide the fate of Assad or the future of their country when they are being slaughtered” by Assad’s military, Russia’s air force and Iranian-backed militias.

“I hope President Trump will make clear that America will not follow this self-destructive and self-defeating path,” McCain said, adding that U.S. allies could fear a bargain with Assad and Russia “sealed with an empty promise of counterterrorism cooperation.”

Graham, who like McCain is a foreign policy hawk and a member of the Armed Services Committee, said it would be a “grave mistake” to drop the removal of Assad as an objective, and would be crushing news to the Syrian opposition and U.S. allies in the region.

In addition, leaving Assad in power is “a great reward for Russia and Iran,” Graham said.

Syrian opposition member Farah al-Attasi said the State Department and the White House were sending contradictory messages on Syria and should start leading and not focus exclusively on fighting Islamic State.

Britain and France reinforced their stance on Assad earlier on Thursday.

French U.N. Ambassador Francois Delattre told reporters: “Assad is not and cannot be the future of his country.”

Robert Ford, who resigned in 2014 as U.S. ambassador to Syria over policy disagreements, said the U.S. government’s policy since late 2014 had been to focus more specifically on the fight against Islamic State as well as al Qaeda, “even if it never acknowledged that its focus on Syria had shifted.”

“Ambassador Haley’s remarks just confirm that the Trump administration is following the same path,” said Ford, who is now a fellow at the Middle East Institute and senior fellow at Yale.

Since the uprising that led to the six-year-long civil war in Syria, the Obama administration had insisted Assad must go.

But in mid-2014 as Washington increased support to moderate rebels to fight Assad’s regime, U.S. officials privately conceded Assad was not going anywhere soon and admitted the difficulty in removing him.

By September 2015, then-Secretary of State Kerry said Assad had to go but the timing of his departure should be decided through negotiation.