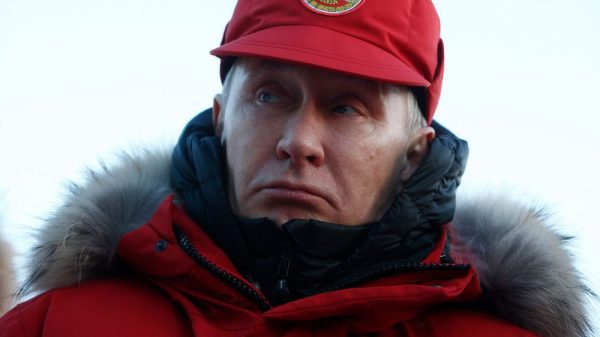 Russian President Vladimir Putin took a tough stance on the biggest mass protests of the past five years, comparing them to the bloodshed and chaos unleashed by the so-called “Arab Spring” revolutions and uprising in neighboring Ukraine.

“The fight against corruption has become an instrument for selfish political goals,” Putin said at an international forum on the Arctic in the northern city of Arkhangelsk on Thursday, in his first public comments on the March 26 rallies. “I think it isn’t right when certain political forces try to use this tool to promote themselves ahead of some political events, including electoral campaigns.”

Tens of thousands of people, including many young taking to the streets for the first time, defied official bans on the rallies and gathered in more than 80 cities across Russia in protest of official corruption. Police detained 1,500 people nationwide, including more than 1,000 in Moscow. Opposition leader Alexey Navalny and at least another 19 people received prison sentences of up to 15 days, mostly for disobeying police, according to human rights activists, in a crackdown condemned by the U.S. and Europe. Putin faces re-election in a year after almost two decades in power.

The Russian leader, 64, said such unsanctioned protests risk plunging the country into violent unrest as happened in Arab countries in 2011 and in Ukraine at the turn of 2013-2014. “We know very well what bloody events it led to in the region,” Putin said, referring to the Arab Spring. “We also know very well the chaos caused by such events in our neighbor, Ukraine.”

All those who violate the law “will be punished in line with Russian legislation,” he said.

Putin’s hard-line comments contrasted with a more conciliatory message from one of his allies, Valentina Matviyenko, speaker of the Federation Council senate, who said a day earlier that the authorities should meet with people to understand the protesters’ motives.

The protests were the largest since demonstrations erupted in winter 2011 and spring 2012 against alleged vote-rigging in parliamentary elections and Putin’s return to the presidency for a third term. Putin is likely to seek a further six years as president in elections next March, though he hasn’t officially said he’ll run. Navalny, 40, has said he’ll be a candidate, but the Kremlin insists he’s ineligible because of a fraud conviction that the opposition activist has dismissed as politically motivated.

Navalny called the protests after releasing a film online that accused Prime Minister Dmitry Medvedev of amassing lavish properties in Russia and abroad with the use of more than a billion dollars of funds. The government, which is struggling to revive the economy after the longest recession in two decades plunged millions of Russians into poverty, has denied the allegations.

Putin on Wednesday made a public show of solidarity with his prime minister, traveling together with Medvedev to Franz Josef Land, a Russian Arctic archipelago.

At the Arkhangelsk forum, the Russian president conceded that investigations in the U.S. of alleged Kremlin involvement in the presidential election last year were holding up dialog with the new administration of President Donald Trump.

“We are just waiting for when the situation improves,” Putin said. “When it’s over, I hope we decide on holding a meeting” with Trump.