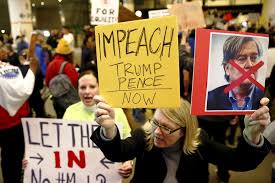 While the resistance to President Donald Trump has largely been private citizens across the Bay Area and country, municipalities are jumping into the fray.

On Tuesday night, the Berkeley City Council passed a five-page resolution calling for the president to be impeached.

“We were one of the first cities to standup against apartheid – that’s a movement that took off and spread and that’s very important,” Councilmember Sophie Hahn told KPIX 5.

“I think it’s going to send a powerful message. I think we have no choice but to do this,” Harrison said.

The home of the Free Speech Movement wasn’t the first city in the Bay Area to pass a resolution calling for the impeachment of Mr. Trump. The cities of Richmond and Alameda got there first.

All three cities are sending their resolutions calling for investigationsand impeachment to Rep. Barbara Lee (D-Oakland).

Back in Berkeley, Harrison said the calls for impeachment over Russia, foreign money and attacks on the press, are American values.

“This is not a matter of policy disagreement with taxes, how we approach healthcare, etcetera. This is about the very essence of our constitution,” Harrison said.