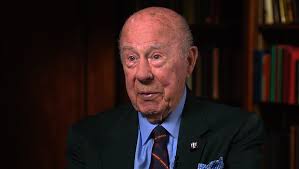 Ronald Reagan’s secretary of State, George Shultz, thinks Russia’s border aggression, especially in Ukraine, must be challenged by the U.S.

The U.S. has provided non-lethal aid to Ukraine’s military, but nothing that falls into the category of “serious armaments.”

Shultz suggested that decreasing Europe’s dependency on Russian oil and gas would strike at an already weakened Russian economy, which has suffered from the global slump in oil prices.

The former secretary of State is also concerned about Russia’s involvement in the Middle East. He blasted the Kremlin’s alliances with Iran and Syria, singling out the aid Russian President Vladimir Putin has lent to Assad in his bloody civil war.

“They are being very disruptive in the Middle East,” Shultz said. “The cruelty they’ve imposed on Aleppo is stunning. So, in my opinion, they have a lot to answer for.”

Russia has chipped into the bedrock of American politics at least since the 2016 presidential election, when emails from the DNC were stolen by Russian hackers and published by WikiLeaks.

An FBI investigation started in July 2016, and investigations in the House and the Senate began in January to identify the extent of Russian cyber attacks and possible relationships with Trump officials.