by yalibnan
665
Share:
The Progressive Socialist Party on Sunday declared that it is “open” to all electoral law formats while stressing that it will not accept to be “marginalized.”

“Through dialogue and partnership we can overcome all obstacles towards a future that we want it to be prosperous and built on national reconciliation,” Education Minister Marwan Hamadeh said after visiting Greek Catholic Bishop of Sidon and Deir al-Qamar Elie Haddad along with PSP leader’s son Taymur Jumblatt and a PSP delegation.

“As for the electoral law, as (PSP chief) Walid Jumblatt said and as Mr. Taymur is negotiating directly and indirectly about this law, we are open to all formats and we’re discussing all formats. We want everyone to be represented correctly and we won’t accept to be marginalized,” Hamadeh added.

“What we care for more than parliamentary seats is the reconciliation of Mount Lebanon …the coexistence that is present in Mount Lebanon and entire Lebanon,” the minister went on to say.

Asked about the proportional representation electoral system, Hamadeh said: “We are following up on the formats are discussing the matter with the PSP officials who are in charge of this issue, but so far we have not received a final proposal in order to take a decision.” 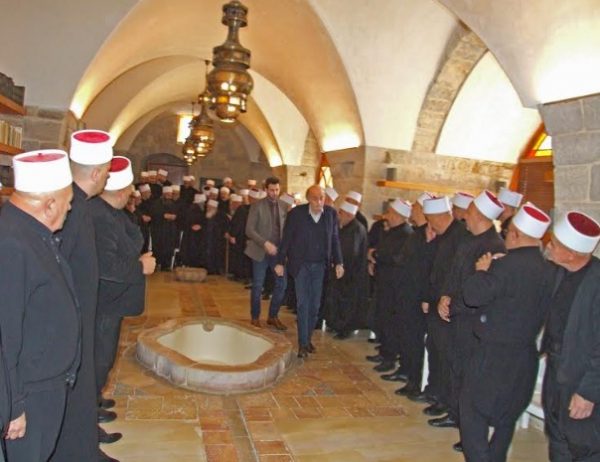 During a meeting with a delegation of Druze clerics Jumblatt said that “no one can ever marginalize the Druze and I do not fear the future and there wont be any wars “.

“After reaching the settlement over the election of Presidents Michel Aoun and PM Saad Hariri, we need to find quick solutions, because the economic situation is in a terrible shape , ” he added

The Iranian backed Hezbollah militant group has repeatedly called for an electoral law fully based on proportional representation but other political parties, especially the Future Movement and PSP , have rejected the proposal and argued that the party’s controversial arsenal of arms would prevent serious competition in regions where the Iran-backed party has clout.

In 2013 Lebanese Forces and The Future Movement backed by the PSP agreed on a hybrid electoral law which calls for 54% of the MPs to be elected under the majoritarian winner-takes-all system and 46 % under the proportional representation system. This draft law was rejected by the Hezbollah-led March 8 opposition.

Hariri was referring to the 2009 election in the areas dominated by Hezbollah. According to the reports that surfaced back then Hezbollah gunmen prevented their rivals from voting and the results of the election showed it. On the other hand in the March 14 dominated areas several Hezbollah backed candidates won the election that was based on winner takes all electoral law.

In a proportional representation system Hezbollah will be able to gain more seats in the March 14 dominated areas but will not lose any seats in its dominated areas as long as it is allowed to keep its arms and use them internally for political gain, according to political analysts

According to the same analysts Hezbollah is trying to use its ally President Michel Aoun to dominate Lebanon by insisting on adopting the proportional law in a single or several expanded electoral districts.
The country has not voted for a parliament since 2009, with the legislature instead twice extending its own mandate.