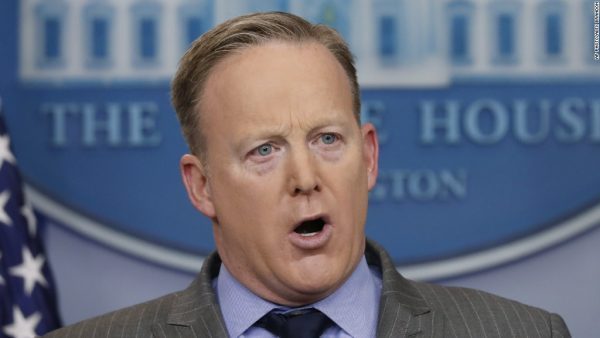 Spicer decided to hold an off-camera “gaggle” with reporters inside his West Wing office instead of the traditional on-camera briefing in the James S. Brady Press Briefing Room.

Among the outlets not permitted to cover the gaggle were news organizations President Trump has singled out for criticism, including CNN.

The New York Times, The Hill, Politico, BuzzFeed, the Daily Mail, BBC, the Los Angeles Times and the New York Daily News were among the other news organizations not permitted to attend.

Journalists from several right-leaning outlets were allowed into Spicer’s office, including Breitbart, the Washington Times and One America News Network.

A number of major news organizations were also let in to cover the gaggle. That group included ABC, CBS, NBC, Fox, Reuters, Bloomberg and McClatchy.

Reporters from The Associated Press and Time magazine were allowed into the gaggle but refused to attend.

“The WHCA board is protesting strongly against how today’s gaggle is being handled by the White House,” Jeff Mason, the association’s president, said in a statement.

“We encourage the organizations that were allowed in to share the material with others in the press corps who were not,” he added. “The board will be discussing this further with White House staff.”

White House spokeswoman Stephanie Grisham responded that “claims that outlets were excluded are not factual.”

“The pool was there, so various media mediums were represented,” she wrote in an email.

Reporters were encouraged to request access to the gaggle with a junior press aide. Some reporters received confirmation they were invited and others didn’t.
Journalists then gathered in the briefing room to await the gaggle, When aides came to gather the pool, those who were not selected were turned back by Grisham in the West Wing hallway leading to Spicer’s office.
After some reporters voiced their frustrated with the arrangement, Grisham asked a uniformed Secret Service officer to tell them to leave the hallway.

It’s highly unusual for White House staff to hand-pick outlets to attend daily, on-the-record briefings with spokespeople, which are typically open for all reporters to attend.

The White House circulated an updated schedule Friday afternoon saying that Spicer would gaggle with an “expanded pool” of reporters instead of on-camera in the briefing room.

The press corps maintains an “in-house pool” of 21 reporters who cover events on the White House grounds when there is not enough space for the press group. There is also a smaller pool that travels with the president to events in Washington.

But the White House apparently decided to use different criteria in forming the group that attended Friday’s briefing.

The incident escalated Trump’s long-running feud with the media.

The president repeatedly slammed the “dishonest media” earlier Friday at the Conservative Political Action Conference, while also saying he respects the First Amendment.

“I love the First Amendment; nobody loves it better than me. Nobody,” he said.

During the transition, Spicer himself also pledged to shake up the White House press corps once Trump took office.

He has adopted a number of changes to the daily briefing format, such as the use of “Skype seats” that allow reporters from outside Washington to ask questions. He also ended the practice of allowing The Associated Press to ask the first question, giving the privilege to a rotation of conservative outlets and some major newspapers.