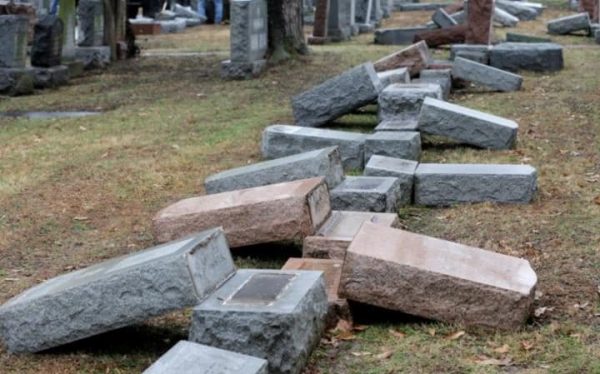 Muslim Americans have helped raise more than $91,000 to repair vandalized headstones at a Jewish cemetery in St. Louis, Missouri, according to an online fundraising page, amid attacks and threats against Jewish institutions.

U.S. Vice President Mike Pence visited the graveyard on Wednesday and told clean-up volunteers, state officials and reporters that there was no place in America for hatred, violence, anti-Semitism or acts of prejudice.

“I must tell you the people of Missouri are inspiring the nation by your love and care of this place, for the Jewish community in Missouri and I want to thank you for that inspiration,” Pence said.

About 170 headstones were toppled or damaged at the century-old Chesed Shel Emeth Society cemetery over the weekend, according to cemetery staff.

Some Jewish groups described the vandalism and threats as the latest evidence that anti-Semitic groups have been emboldened by the election of Donald Trump as U.S. president. His campaign last year drew the support of white nationalists and right-wing groups, despite his disavowals of them.

“Muslim Americans stand in solidarity with the Jewish-American community to condemn this horrific act of desecration,” the fundraisers said on their website.

More than 3,000 people had donated $91,583 by late Wednesday afternoon. Cemetery staff declined comment on the fundraising.

Jewish community centers across the United States have reported a surge in bomb threats, all of which have so far proved to be hoaxes.

On Wednesday the Anti-Defamation League, a Jewish advocacy group, said its national headquarters in New York City received an anonymous bomb threat but was later given the all clear.

New York Governor Andrew Cuomo ordered state police to investigate and work with federal and local law enforcement. In a statement, Cuomo said the threats were “now a national crisis” because of their regularity.

Trump condemned the previous threats as anti-Semitism for the first time on Tuesday after repeatedly declining to do so when asked by journalists last week. Some Jewish organizations have criticized his approach.

The fundraising effort was launched by Linda Sarsour, a liberal political activist, and Tarek El-Messidi, the founding director of Celebrate Mercy, a non-profit organization that teaches the public about Mohammad, the founder of Islam.

Sarsour was a supporter of U.S. Senator Bernie Sanders in his bid to become the Democratic Party’s presidential candidate, and was one of the organizers of the Women’s March on Washington on Jan. 21, the day after Trump’s inauguration.