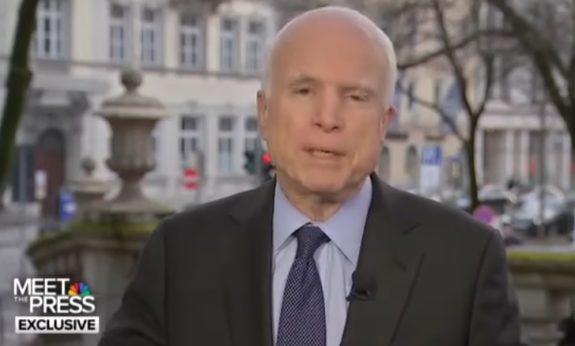 Sen. John McCain (R-Ariz.) secretly traveled to northern Syria last weekend to speak with American military officials and Kurdish fighters at the forefront of the push to drive Islamic State out of their de facto capital of Raqqa, according to U.S. officials.

The unusual visit, which officials said was organized with the help of the U.S. military, came as the Trump administration is debating plans for an accelerated military campaign against Islamic State, also known by the acronyms ISIS and ISIL.

Mr. McCain, chairman of the Senate Armed Services Committee, first traveled to rebel-controlled Syria in 2013, when he met with leaders of the Free Syrian Army, the umbrella group supported by America and its allies. This was believed to be his first visit to Syria since then.

U.S. officials familiar with Mr. McCain’s trip said that the senator traveled to Kobani, the Syrian town on the Turkey border controlled by Kurdish forces since 2012.

In a statement, Mr. McCain’s office confirmed that a trip took place, saying the senator “traveled to northern Syria last week to visit U.S. forces deployed there and to discuss the counter-ISIL campaign and ongoing operations to retake Raqqa.”

Mr. McCain is believed to be the first U.S. lawmaker to travel to the Kurdish-controlled area of northeastern Syria since it became a hub for American special-operations forces who are aiding local forces in the fight against Islamic State.

The short visit came in the middle of a regional trip that took Mr. McCain from Saudi Arabia to Turkey, where he discussed evolving plans to counter Islamic State in the Middle East.

After traveling to Syria, Mr. McCain met with President Recep Tayyip Erdogan in the Turkish capital. Mr. Erdogan is pushing the Trump administration to sideline the Kurdish fighters that U.S. military leaders view as a vital ally in the fight against Islamic State.

It is rare for U.S. politicians to travel to Syria. Last month, Rep. Tulsi Gabbard (D-Hawaii), secretly traveled to Damascus, where she held a controversial meeting with President Bashar al-Assad. Last year, Brett McGurk, America’s special envoy for the international coalition to defeat ISIS, traveled to Kobani and met with Kurdish fighters, creating an uproar in Turkey.

Ankara views the U.S.-backed Kurdish forces in Syria as terrorists aligned with Kurdish separatists in Turkey embroiled in a yearslong battle for more autonomy. Mr. Erdogan and other Turkish leaders criticized Mr. McGurk after he was photographed receiving a plaque from a leader of the Syrian Kurdish force.

Mr. McGurk, who was asked by the Trump administration to stay on in his job, is in the thick of a debate over when and how to launch an assault on Raqqa.

President Donald Trump has asked the U.S. military to present him with a new plan to destroy Islamic State, and the report is supposed to be finished by the end of the month.

Central to the debate is whether or not to rely on Kurdish forces to take Raqqa, a city with a Sunni majority that is likely to be wary of Kurdish control.

U.S. officials involved in the debate say that it would be difficult, if not impossible, to launch a successful assault on Raqqa in the coming months without working with Kurdish forces. Turkish leaders have been pushing the Trump administration to sideline the Kurdish fighters, but they have not presented a viable alternative plan, U.S. officials said.