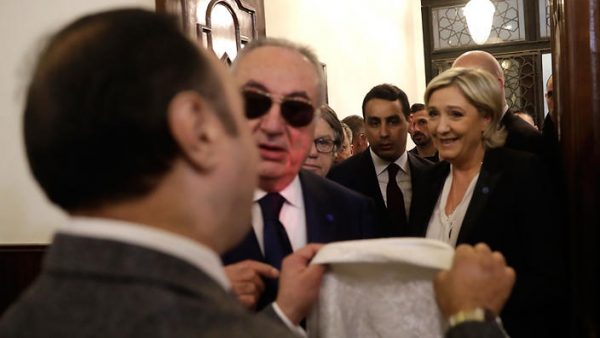 An aide of Lebanon’s Grand Mufti Sheikh Abdel-Latif Derian, left, gives a head scarf to French far-right presidential candidate Marine Le Pen (right) who arrived Monday in Beirut, , to wear during her meeting with the Mufti but she refused, upon her arrival at Dar al-Fatwa the headquarters of the Sunni Mufti, in Beirut, Lebanon, Tuesday, Feb. 21, 2017. The meeting was canceled. Le Pen Stirred controversy in Lebanon over the headscarf issue and Syrian president Bashar Al Assad Assad whom she supports as ” the lesser evil ” (AP Photo/Hussein Malla)
Share:

The raid is the second in a year by investigators trying to determine whether the FN used European Parliament funds to pay for 20 assistants presented as parliamentary aides while continuing to work for the party elsewhere.

“For the second time, a raid took place at the same offices, over the same allegations, which confirms that the first raid amounted to nothing,” the party said in a statement.

The group accused investigators acting for the Paris prosecutor’s office of a “media operation” designed to disrupt the presidential campaign of FN leader Marine Le Pen.

She is riding high in polls ahead of the two-stage presidential election on April 23 and May 7 election, and has denied the claims, describing the investigation as a vendetta against her.

According to a report by the EU’s anti-fraud office OLAF, leaked last week, the parliament paid out 41,554 euros towards a contract for Le Pen’s bodyguard Thierry Legier who was falsely presented as a parliamentary assistant.

The allegations against Le Pen have been drowned out by a fake jobs scandal engulfing her conservative rival Francois Fillon.

Fillon’s campaign has been adrift since it emerged that his wife netted at least 680,000 euros for a suspected fake job as a parliamentary assistant over a period spanning 15 years. He has denied the allegations.

Polls currently show Le Pen winning the first round of the election, but failing to garner the more than 50 percent of voters needed for victory in the second round.