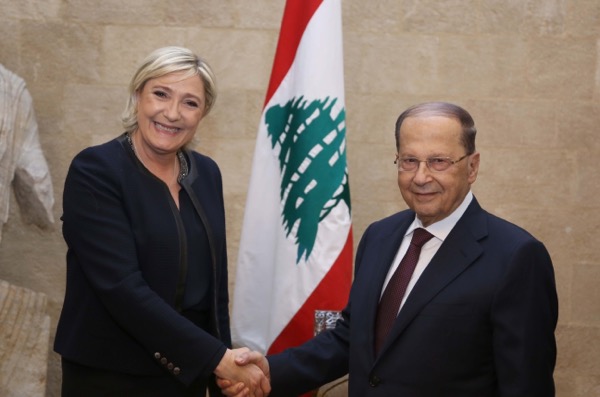 French far-right leader and presidential hopeful Marine Le Pen on Monday met for the first time with a foreign head of state, holding talks with Lebanese President Michel Aoun in the capital of Beirut.

Le Pen, who is trying to establish international credentials as part of her current bid for the Elysée Palace, was also meeting business and religious leaders during the two-day visit to the Middle Eastern nation.

“We discussed the long and fruitful friendship between our two countries,” the National Front (FN) leader said after meeting Aoun at the presidential palace in the hilltop suburb of Baabda.

She said they also discussed the refugee crisis in Lebanon, where more than one million war-wearySyrians have fled in recent years.

“We raised… the concerns we share over the very serious refugee crisis,” she said. “These difficulties are being overcome by the courage and generosity of Lebanon but this cannot go on forever.”

Opinion polls show that Le Pen is on pace to win the first round of France’s presidential election on April 23, but that she will be beaten in the run-off ballot on May 7. 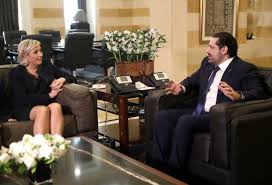 The leader of the anti-immigration FN party also met Lebanese Prime Minister Saad Hariri, a Sunni Muslim, who cautioned against associating his religion with jihadists who have repeatedly targeted France.

“The worst mistake would be the amalgam between Islam and Muslims on one hand and terrorism on the other hand,” Hariri said, in a statement issued by his office.

“The Lebanese and Arabs, like the majority of the world, consider France to be the homeland of human rights and of the republican state that makes no ethnic, religious or class distinction between its citizens,” he said.

Le Pen said she told Hariri that there is “no viable and workable solution” to the Syrian civil war beyond choosing between President Bashar al-Assad and Islamic State group.

“I clearly explained that in the political picture the least bad option is the politically realistic. It appears that Bashar al-Assad is evidently today the most reassuring solution for France,” she said.

France had mandate power over both Lebanon and Syria during the first half of the 20th century, and Jean-Marie Le Pen – Marine’s father – cultivated ties with Lebanese Christians for many years as head of the FN.

Le Pen has met few top foreign officials since taking control of the FN in 2011. German Chancellor Angela Merkel has refused to meet with her.

Spanish Prime Minister Mariano Rajoy told AFP last week that “a victory of the populists would be the end of Europe”, a clear reference to Le Pen’s call for a referendum on France’s EU membership.