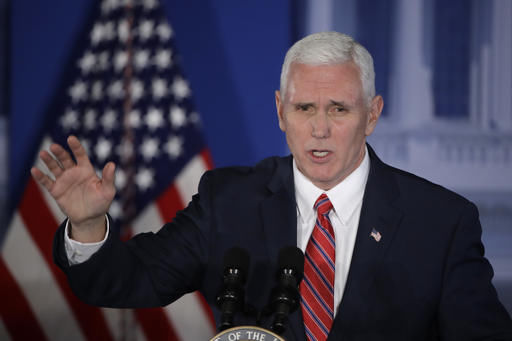 U.S. Vice President Mike Pence on Saturday brought a message of support for Europe from Donald Trump but failed to wholly reassure allies worried about the new president’s stance on Russia and the European Union.

In Pence’s first major foreign policy address for the Trump administration, the vice president told European leaders that he spoke for Trump when he promised “unwavering” commitment to the NATO military alliance.

“Today, on behalf of President Trump, I bring you this assurance: the United States of America strongly supports NATO and will be unwavering in our commitment to this transatlantic alliance,” Pence told the Munich Security Conference, offering “greetings” from the president.

While Poland’s defence minister praised Pence, many others, including France’s foreign minister and U.S. lawmakers in Munich, remained sceptical that he had convinced allies that Trump, a former reality TV star, would stand by Europe.

Trump’s contradictory remarks on the value of the North Atlantic Treaty Organisation, scepticism of the 2015 deal to curb Iran’s nuclear ambitions and an apparent disregard for the future of the European Union have left Europe fearful for the seven-decade-old U.S. guardianship of the West.

After Pence spoke, the former deputy secretary to the alliance Alexander Vershbow summed up the mood in Munich, telling Reuters: “Many in this hall are still asking if this is the real policy.”

Pence, who held a meeting with German Chancellor Angela Merkel, also marked out a divide on Iran, which the European Union sees as a business opportunity following the nuclear deal.

French Foreign Minister Jean-Marc Ayrault on Twitter expressed his disappointment that Pence’s speech contained “Not a word on the European Union”, although the vice president will take his message to EU headquarters in Brussels on Monday.

Pence, Trump’s Defense Secretary Jim Mattis and his foreign minister Rex Tillerson all delivered messages of reassurance on their debut trip to Europe.

“I like a lot of what I heard from Vice President Pence,” Murphy told Reuters. “It’s just hard to square that speech with everything Donald Trump is doing and saying,” citing an assault on the free press.

The resignation of Trump’s security adviser Michael Flynn over his contacts with Russia on the eve of the U.S. charm offensive in Europe also tarnished the message Pence, Mattis and Tillerson were seeking to send, officials told Reuters.

U.S. Republican Senator John McCain, a Trump critic, told the conference on Friday that the new president’s team was “in disarray”.

The United States is Europe’s biggest trading partner, the biggest foreign investor in the continent and the European Union’s partner in almost all foreign policy, as well as the main promoter of European unity for more than sixty years.

“This is President Trump’s promise: we will stand with Europe today and every day, because we are bound together by the same noble ideals – freedom, democracy, justice and the rule of law,” Pence said.

Pence received little applause beyond the warm reception he got when he declared his support for NATO. His warning that the “time has come to do more” on military spending was met with an awkward silence.

Ayrault, in a speech defending Franco-German leadership in Europe, lauded the virtues of multilateralism at a time of rising nationalism. Trump has promise ‘America First.’

“In these difficult conditions, many are attempting to look inward, but this isolationism makes us more vulnerable. We need the opposite,” Ayrault said.

Pence warned allies they must pay their fair share to support NATO, noting many lack “a clear or credible path” to do so. He employed a tougher tone than Mattis, who delivered a similar but more nuanced message to NATO allies in Brussels this week, diplomats said.

The United States provides around 70 percent of the NATO alliance’s funds. European governments sharply cut defence spending after the fall of the Soviet Union but Russia’s resurgence as a military power and its seizure of Ukraine’s Crimean peninsula has started to change that.

Baltic states and Poland fear Russia might try a repeat of Crimea elsewhere. Europe believes Moscow is seeking to destabilize governments and influence elections with cyber attacks and fake news, an accusation denied at the conference by Russian Foreign Minister Sergei Lavrov.

Pence’s tough line on Russia, calling on Moscow to honour the international peace accords that seek to end the conflict in eastern Ukraine, were welcomed by Poland.

“Know this: the United States will continue to hold Russia accountable, even as we search for new common ground, which as you know, President Trump believes can be found,” Pence said.

“They want to show the U.S. military potential,” he said.

In a brief statement at the Munich Security Conference on February 18,  Lavrov said the “post-Cold War order” has come to an end but that Cold War thinking persists among some leaders in the West.

Lavrov repeated Russian accusations that the enlargement of the NATO alliance has created tension in Europe.

But he called for the resumption of military cooperation between Russia and NATO, saying that political meetings were pointless without it.

He said Russia wanted relations with the United States that are “pragmatic” and marked by mutual respect and acknowledgement of a shared responsibility for global stability.

Lavrov said the badly strained ties that existed now were “unnatural” and the two countries had huge potential for cooperation.

Lavrov rejected the blame Kyev and Western countries have placed on Russia for continuing war in eastern Ukraine, accusing Ukraine of failing to meet commitments under the 2015 Minsk cease-fire deal.

He said a quarter-century after the Cold War, the world was neither “West-centric” nor “less dangerous,” and that a “unipolar world” — meaning in which the United States is dominant — cannot last long.

Addressing allegations that Russia meddled in the U.S. presidential election in 2016 and is seeking to influence elections in Europe this year, Lavrov claimed that no proof of such interference had been provided.

U.S. intelligence agencies have concluded that Russia used hacking, leaks, and other methods to interfere in the U.S. election in an effort to undermine U.S. democracy, discredit presidential candidate Hillary Clinton, and tilt the November vote toward Trump.