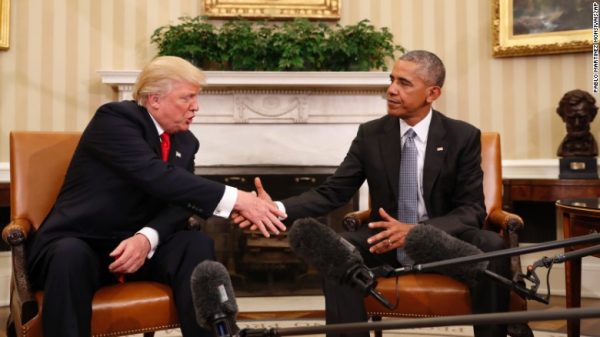 WASHINGTON — President Trump, after promising a radical break with the foreign policy of Barack Obama, is embracing some key pillars of the former administration’s strategy, including warning Israel to curb settlement construction, demanding that Russia withdraw from Crimea and threatening Iran with sanctions for ballistic missile tests.

In the most startling shift, the White House issued an unexpected statement appealing to the Israeli government not to expand the construction of Jewish settlements beyond their current borders in East Jerusalem and the West Bank. Such expansion, it said, “may not be helpful in achieving” the goal of peace.

At the United Nations, Ambassador Nikki R. Haley declared that the United States would not lift sanctions against Russia until it stopped destabilizing Ukraine and pulled troops out of Crimea.

On Iran, the administration is preparing economic sanctions similar to those the Obama administration imposed just over a year ago. The White House has also shown no indication that it plans to rip up Mr. Obama’s landmark nuclear deal, despite Mr. Trump’s withering criticism of it during the presidential campaign. New administrations often fail to change the foreign policies of their predecessors as radically as they promised, in large part because statecraft is so different from campaigning. And of course, today’s positions could shift over time. There is no doubt the Trump administration has staked out new ground on trade and immigration, upending relations with Mexico and large parts of the Muslim world in the process.

But the administration’s reversals were particularly stark because they came after days of tempestuous phone calls between Mr. Trump and foreign leaders, in which he gleefully challenged diplomatic orthodoxy and appeared to jeopardize one relationship after another.

Mr. Trump made warmer relations with Russia the centerpiece of his foreign policy during the campaign, and European leaders had been steeling for him to lift sanctions they and Mr. Obama imposed on President Vladimir V. Putin after he annexed Crimea. But on Thursday, Mr. Trump’s United Nations ambassador, Ms. Haley, sounded a lot like her predecessor, Samantha Power.

“We do want to better our relations with Russia,” she said in her first remarks to an open session of the United Nations Security Council. “However, the dire situation in eastern Ukraine is one that demands clear and strong condemnation of Russian actions.”

Similarly, Mr. Trump presented himself during the campaign as a stalwart supporter of Israel and criticized the Obama administration for allowing the passage of a Security Council resolution in December that condemned Israel for its expansion of settlements.

“While we don’t believe the existence of settlements is an impediment to peace,” his press secretary, Sean Spicer, said in a statement, “the construction of new settlements or the expansion of existing settlements beyond their current borders may not be helpful in achieving that goal.”

The White House noted that the president “has not taken an official position on settlement activity.” It said he would discuss the issue with Prime Minister Benjamin Netanyahu of Israel when they meet Feb. 15, in effect telling Mr. Netanyahu to wait until then. Emboldened by Mr. Trump’s support, Israel has announced more than 5,000 new homes in the West Bank since his inauguration.

Mr. Trump shifted his policy after he met briefly with King Abdullah II of Jordan on the sidelines of the National Prayer Breakfast — an encounter that put the king, one of the most respected leaders of the Arab world, ahead of Mr. Netanyahu in seeing the new president. Jordan, with its large Palestinian population, has been steadfastly critical of settlements.

The administration’s abrupt turnaround also coincided with Secretary of State Rex W. Tillerson’s first day at the State Department and the arrival of Defense Secretary Jim Mattis in South Korea on his first official trip. Both men are viewed as potentially capable of exerting a moderating influence on the president and his cadre of White House advisers, though it was unclear how much they had to do with the shifts.

With Iran, Mr. Trump has indisputably taken a harder line than his predecessor. While the Obama administration often looked for ways to avoid confrontation with Iran in its last year, Mr. Trump seems equally eager to challenge what he has said is an Iranian expansion across the region, especially in Iraq and Yemen.

In an early morning Twitter post on Thursday, Mr. Trump was bombastic on Iran. “Iran has been formally PUT ON NOTICE for firing a ballistic missile,” he wrote. “Should have been thankful for the terrible deal the U.S. made with them!” In a second post, he said wrongly, “Iran was on its last legs and ready to collapse until the U.S. came along and gave it a life-line in the form of the Iran Deal: $150 billion.”

Still, the administration has been careful not to specify what the national security adviser, Michael T. Flynn, meant when he said on Wednesday that Iran had been put “on notice” for its missile test and for its arming and training of the Houthi rebels in Yemen.

The new sanctions could be announced as soon as Friday. But most experts have said they will have little practical effect, because the companies that supply missile parts rarely have direct business with the United States, and allies have usually been reluctant to reimpose sanctions after many were lifted as part of the 2015 nuclear accord.

Ali Akbar Velayati, an adviser to Iran’s supreme leader, replied, “This is not the first time that an inexperienced person has threatened Iran,” according to the semiofficial Fars news agency. “The American government will understand that threatening Iran is useless.”

Some analysts said they worried that the administration did not have tools, short of military action, to back up its warning.

“Whether the Trump administration intended it or not, they have created their own red line,” said Aaron David Miller, a senior fellow at the Woodrow Wilson International Center for Scholars. “When Iran tests again, the administration will have no choice but to put up or shut up.”

Mr. Netanyahu will cheer Mr. Trump’s tough tone with Iran. But the statement on settlements may force him to change course on a delicate domestic issue. His coalition government seemed to take Mr. Trump’s inauguration as a starting gun in a race to increase construction in occupied territory.

After Mr. Trump was sworn in, Israel announced that it would authorize another 2,500 homes in areas already settled in the West Bank, and then followed that this week by announcing 3,000 more. On Wednesday, Mr. Netanyahu took it a step further, vowing to build the first new settlement in the West Bank in many years.

For Mr. Netanyahu, the settlement spree reflects a sense of liberation after years of constraints from Washington, especially under Mr. Obama, who, like other presidents, viewed settlement construction as an impediment to negotiating a final peace settlement. It is also an effort to deflect criticism from Israel’s political right for Mr. Netanyahu’s compliance with a court order to force several dozen families out of an illegal West Bank outpost, Amona.

The “beyond their current borders” phrase in the White House statement hinted at a return to a policy President George W. Bush outlined to Prime Minister Ariel Sharon in 2004, which acknowledged that it was unrealistic to expect Israel to give up its major settlements in a final deal, although they would be offset by mutually agreed-upon land swaps.

Mr. Trump had also promised to move the American Embassy from Tel Aviv to Jerusalem. But the White House has slowed down the move, in part out of fear of a violent response.

The policy shifts came after a turbulent week in which Mr. Trump also clashed with the leaders of Australia and Mexico over one of the most fraught issues of his new presidency: immigration. He defended the tense exchanges as an overdue display of toughness by a United States that has been exploited “by every nation in the world, virtually.”

“They’re tough; we have to be tough. It’s time we’re going to be a little tough, folks,” he said at the prayer breakfast Thursday. “It’s not going to happen anymore.”

Yet later in the day, the White House felt obliged to put a more diplomatic gloss on events. Mr. Spicer said Mr. Trump’s call with Prime Minister Malcolm Turnbull of Australia had been “very cordial,” even if Mr. Trump bitterly opposed an agreement negotiated by the Obama administration for the United States to accept the transfer of 1,250 refugees from an Australian detention camp.

A senior administration official disputed a report that Mr. Trump had threatened to send troops to Mexico to deal with its “bad hombres.” The official said that the conversation with President Enrique Peña Nieto had been “actually very friendly,” and that Mr. Trump had been speaking in jest.