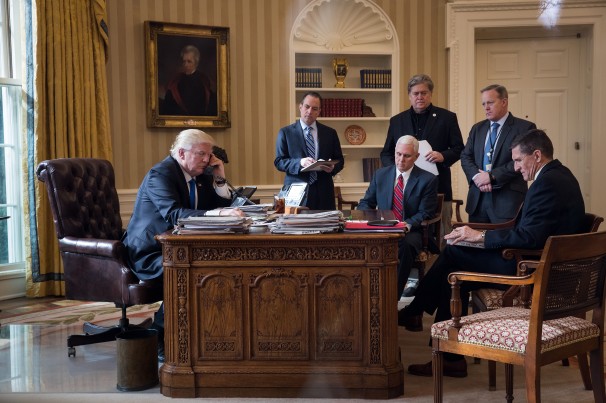 President Trump called Russian President Vladi­mir Putin on Saturday in hopes of cultivating “a great relationship,” one in a series of telephone conversations with world leaders as he develops a personal rapport with the heads of several traditional U.S. allies.

Trump’s call with Putin, which began about noon Eastern time, comes as the president faces pressure to maintain sanctions against Moscow. He is reaching out to repair the U.S.-Russian relationship, which has been badly strained by the Ukrainian crisis, the war in Syria and the conclusion by U.S. intelligence agencies that Putin ordered systematic hacking of Democratic emails to tip the presidential election in Trump’s favor.

Trump spoke with Putin from behind his desk in the Oval Office, which was stacked high with papers and a glass of soda. The president was flanked by Vice President Pence, national security adviser Michael Flynn, White House chief of staff Reince Priebus, chief strategist Stephen K. Bannon and press secretary Sean Spicer.

Trump began the day with a call to Japanese Prime Minister Shinzo Abe to discuss security and trade issues between the two countries and the mutual threat posed by North Korea.

“President Trump affirmed the ironclad U.S. commitment to ensuring the security of Japan,” a White House statement said. It continued, “President Trump and Prime Minister Abe said they would consult and cooperate on the threat posed by North Korea.”

Speaking at his first news conference since winning the election, President-elect Donald Trump said he hopes to get along with Russian President Vladimir Putin and said Putin’s support is “an asset.” (The Washington Post)
Trump and Abe also discussed an upcoming visit to Japan and other countries in the region by newly installed Defense Secretary James Mattis. Abe, who during Trump’s transition phase became the first foreign leader to talk face-to-face with the president-elect, agreed to meet Trump during a visit to Washington on Feb. 10, according to the White House.

Trump then spoke by phone from with German Chancellor Angela Merkel. His outreach to Merkel comes after his repeated attacks on her during the campaign, during which he blasted the German policy on admitting Syrian refugees for allegedly putting German citizens in danger of terrorist attacks.

Ahead of Trump’s call with Putin, leaders in Moscow expressed cautious hope that the new American leader could forge stronger ties than former president Barack Obama did.

On Saturday, Nikolai Patrushev, the influential head of the Russian Security Council, welcomed the first contact.

“We will await the results, but I believe everything will be positive,” Patrushev said Saturday, according to Russia’s Interfax news agency.

From Moscow’s point of view, lifting the sanctions imposed by the Obama administration for interference in the presidential election and Russia’s intervention in Ukraine would be a good start, as would a reduction of NATO’s military presence near Russia’s borders.

Washington’s European allies, meanwhile, have expressed concern over whether Trump’s first moves with Russia will signal a reduction of the U.S. commitment to European security.

But Trump, speaking Friday at a White House news conference with British Prime Minister Theresa May, said that it is “very early” to discuss lifting sanctions on Russia. May also stated her commitment to keep the sanctions in place until the Minsk Agreement, a plan to end the conflict in Ukraine, has been implemented. And she added that she continues to argue that position “inside the European Union.”

Trump’s first contact with Putin as president comes after months of speculation over the Kremlin’s role in the 2016 election — starting with Trump’s frequent expressions of admiration for Putin and culminating in the assessment of the U.S. intelligence community that Russia interfered in the campaign on Trump’s behalf.

Trump has vehemently denied allegations that his positive view of Moscow stems from business ties or blackmail by Russian intelligence, and he has sought to portray his upbeat words about Putin as a positive.

He has consistently argued that Russia can be a strong ally instead of a strategic ally, saying the two countries could cooperate on counterterrorism in general and rolling back the Islamic State in particular, as well as countering nuclear weapon proliferation. Trump has suggested that Washington can work with Moscow on the conflicts in Syria and Ukraine and that he might be ready to negotiate down NATO’s strong defensive posture on Russia’s western border. U.S. lawmakers from both parties, and others including Trump Cabinet picks, have raised alarms or at least questioned his softer approach to Russia.

But on Friday, the president expressed more tempered expectations.

“As far as, again, Putin and Russia, I don’t say good, bad or indifferent,” Trump said. “I don’t know the gentleman. I hope we have a fantastic relationship. That’s possible. And it’s also possible we won’t. We will see what happens. I will be representing the American people very, very strongly, very forcefully.”

On a grander scale, the Kremlin seems to hope the Trump administration will relax what it sees as a policy of containment since the fall of the Soviet Union left the United States as the world’s sole superpower. In the new world order outlined by Putin, Russia would have greater influence in world affairs and, from Moscow’s point of view, feel more secure at home.

But Moscow has consistently cautioned about “excessive optimism” over what Trump’s presidency will mean for Russia, and Putin spokesman Dmitry Peskov stayed on script Friday. “One can hardly expect substantive contacts on the entire range of affairs from this call,” he told reporters. “Let us wait and see. Let us be patient.”

Moscow’s establishment has welcomed Trump as a pragmatist who will not try to enforce American values on the rest of the world.

“He is a businessman. He is a pragmatic person,” Andrei Norkin, co-host of a popular Russian political talk show, said this week. “I hope that his attitude to foreign policy will be like to some sort of business deal. People who will work with him will be telling him ‘Mr. President, we are taking a risk here,’ and he will agree.”

Filipov reported from Moscow. Karen DeYoung in Washington contributed to this report.