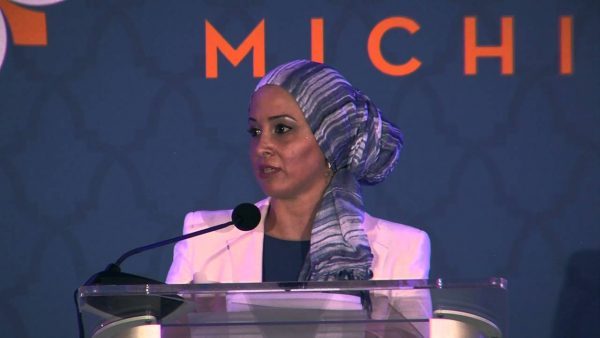 “There is no evidence that refugees — the most thoroughly vetted of all people entering our nation — are a threat to national security,” Lena F. Masri, CAIR’s national litigation director, said in a statement. “This is an order that is based on bigotry, not reality.”
Share:

By Emma Brown and David Nakamura

Refugees and migrants holding valid visas who were en route to the United States on Friday evening have been detained at U.S. airports and restricted from the country as a result of President Trump’s executive order banning their entry.
Lawyers for two Iraqi men detained at New York’s John F. Kennedy International Airport filed a middle-of-the-night lawsuit in federal court challenging Trump’s executive order as unconstitutional and seeking the release of their clients. They also are seeking class certification so they may represent all refugees and visa-holders who are being held at U.S. ports of entry.Immigration advocates say at least one refu­gee family is detained at San Francisco International Airport, but it is not clear how many refugees are currently detained at airports nationwide.

Trump’s executive order suspends admission of all refugees for 120 days and bars for 90 days the entry of any citizens from seven predominantly Muslim countries, including Iraq, even if they have valid visas. Trump said that the goal is to screen out “radical Islamic terrorists” and that priority for admission would be given to Christians.

The executive order drew immediate condemnation from advocates for refugees and from the Council on American-Islamic Relations (CAIR), which announced plans to file a lawsuit next week challenging Trump’s order as unconstitutional.

“There is no evidence that refugees — the most thoroughly vetted of all people entering our nation — are a threat to national security,” Lena F. Masri, CAIR’s national litigation director, said in a statement. “This is an order that is based on bigotry, not reality.”

Both Iraqi men now detained at JFK held valid U.S. visas and had been receiving pro-bono legal assistance for several months from the New York-based International Refugee Assistance Project. Betsy Fisher, the organization’s policy director, said the men were in the air on separate flights when Trump signed the temporary ban on refugees Friday. She called their detention “our worst-case scenario.”

“In the coming weeks we will be advocating to show why this policy is bad for U.S. national security, why it goes against our humanitarian responsibilities, and why it is fundamentally un-American,” Fisher said. “If there is one fundamentally American value then it is welcoming those who are fleeing persecution. At our best, this is what we can do.”

One of the Iraqi men detained at JFK, Hameed Khalid Darweesh, 53, had worked as a contractor for the U.S. government in Iraq for about a decade, including as an interpreter for the Army. He and his wife and three children had spent more than two years securing a special immigrant visa, granted to Iraqis who assisted U.S. military forces.

The Darweesh family landed in New York at approximately 6 p.m. Friday evening, and Hameed Darweesh was detained by U.S. Customs and Border Protection officials, according to the complaint filed in U.S. District Court for the Eastern District of New York. He has not been allowed to speak with his attorneys and is at risk of being returned to a country where he faces enormous risks to his personal security due to his aid to the U.S. government, the complaint says.

The other detainee is Sameer Abdulkhaleq Alshawi, 33, who holds a visa that allowed him to join his wife and young child in Texas. His wife had worked for a U.S. government contractor and came to the United States as a refu­gee in 2014.

Marielena Hincapie, executive director for the National Immigration Law Center, said immigration advocates first learned of immigrants being detained Friday evening after a report from a family detained in San Francisco. The advocates attempted to reach U.S. Customs and Border Protection but were unsuccessful.

“We were trying to find out if it was lack of communication or what was the plan?” she said in an interview Saturday morning.

Then they learned of the two immigrants from Iraq who had been detained at JFK Airport.

“We don’t have any guidance” from U.S. officials, Hincapie said. “That’s when we decided to file.”

Lawyers for the two Iraqis held in New York have been unable to speak to their clients. When the lawyers asked to speak with them, Customs and Border Protection agents at JFK said that they were not the ones to field such a request.

“Who is the person to talk to?” the attorneys asked, according to the complaint. The CBP agents responded: “Mr. President. Call Mr. Trump.”