In the valleys between Damascus and Lebanon, where whole communities had abandoned their lives to war, a change is taking place. For the first time since the conflict broke out, people are starting to return.

But the people settling in are not the same as those who fled during the past six years.

The new arrivals have a different allegiance and faith to the predominantly Sunni Muslim families who once lived there. They are, according to those who have sent them, the vanguard of a move to repopulate the area with Shia Muslims not just from elsewhere in Syria, but also from Lebanon and Iraq.

The population swaps are central to a plan to make demographic changes to parts of Syria, realigning the country into zones of influence that backers of Bashar al-Assad, led by Iran, can directly control and use to advance broader interests. Iranis stepping up its efforts as the heat of the conflict starts to dissipate and is pursuing a very different vision to Russia, Assad’s other main backer.

Russia, in an alliance with Turkey, is using a nominal ceasefire to push for a political consensus between the Assad regime and the exiled opposition. Iran, meanwhile, has begun to move on a project that will fundamentally alter the social landscape of Syria, as well as reinforcing the Hezbollah stronghold of north-eastern Lebanon, and consolidating its influence from Tehran to Israel’s northern border.

“Iran and the regime don’t want any Sunnis between Damascus and Homs and the Lebanese border,” said one senior Lebanese leader. “This represents a historic shift in populations.”

Key for Iran are the rebel-held towns of Zabadani and Madaya, where Damascus residents took summer breaks before the war. Since mid-2015 their fate has been the subject of prolonged negotiations between senior Iranian officials and members of Ahrar al-Sham, the dominant anti-Assad opposition group in the area and one of the most powerful in Syria.

Talks in Istanbul have centred on a swap of residents from two Shia villages west of Aleppo, Fua and Kefraya, which have both been bitterly contested over the past three years. Opposition groups, among them jihadis, had besieged both villages throughout the siege of Aleppo, attempting to tie their fate to the formerly rebel-held eastern half of the city.

The swap, according to its architects, was to be a litmus test for more extensive population shifts, along the southern approaches to Damascus and in the Alawite heartland of Syria’s north-west, from where Assad draws much of his support.Labib al-Nahas, the chief of foreign relations for Ahrar al-Sham, who led negotiations in Istanbul, said Tehran was seeking to create areas it could control. “Iran was very ready to make a full swap between the north and south. They wanted a geographical continuation into Lebanon. Full sectarian segregation is at the heart of the Iranian project in Syria. They are looking for geographical zones that they can fully dominate and influence. This will have repercussions on the entire region.

“[The sieges of] Madaya and Zabadani became the key issue to prevent the opposition from retaking Fua and Kefraya, which have exclusive populations of Shia. Hezbollah consider this a security zone and a natural extension of their territory in Lebanon. They have had very direct orders from the spiritual leadership of Iran to protect them at any cost.”

Iran has been especially active around all four towns through its Hezbollah proxies. Along the ridgelines between Lebanon’s Bekaa valley and into the outskirts of Damascus, Hezbollah has been a dominant presence, laying siege to Madaya and Zabadani and reinforcing the Syrian capital. Wadi Barada to the north-west, where ongoing fighting is in breach of the Russian-brokered ceasefire, is also part of the calculations, sources within the Lebanon-based movement have confirmed.

Elsewhere in Syria, demographic swaps are also reshaping the geopolitical fabric of communities that, before the war, had coexisted for centuries. In Darayya, south-west of Damascus, more than 300 Iraqi Shia families moved into neighbourhoods abandoned by rebels last August as part of a surrender deal. Up to 700 rebel fighters were relocated to Idlib province and state media announced within days that the Iraqis had arrived. 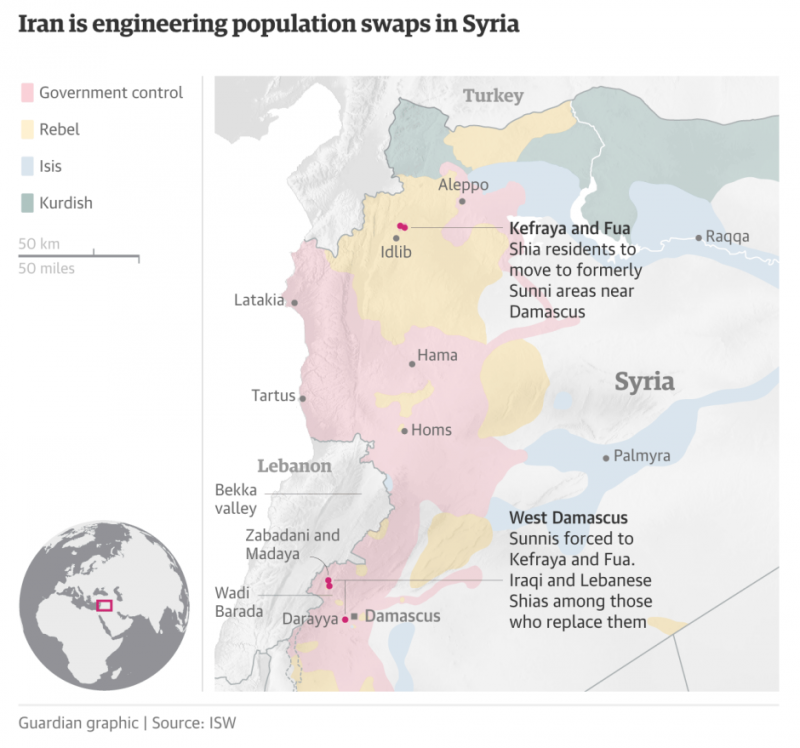 Shia shrines in Darayya and Damascus have been a raison d’etre for the presence of Hezbollah and other Iranian-backed Shia groups. The Sayeda Zainab mosque on the capital’s western approach has been heavily fortified by Hezbollah and populated by families of the militant group, who have moved in since late 2012. Tehran has also bought large numbers of homes near the Zainab mosque, and a tract of land, which it is using to create a security buffer – a microcosm of its grander project.

Abu Mazen Darkoush, a former FSA commander who fled Zabadani for Wadi Barada said Damascus’s largest Islamic shrine, the Umayyad mosque, was now also a security zone controlled by Iranian proxies. “There are many Shia who were brought into the area around the mosque. It is a Sunni area but they plan for it to be secured by Shias, then surrounded by them.”

Senior officials in neighbouring Lebanon have been monitoring what they believe has been a systematic torching of Land Registry offices in areas of Syria recaptured on behalf of the regime. A lack of records make it difficult for residents to prove home ownership. Offices are confirmed to have been burned in Zabadani, Darayya, Syria’s fourth city, Homs, and Qusayr on the Lebanese border, which was seized by Hezbollah in early 2013.

Darkoush said whole neighbourhoods had been cleansed of their original inhabitants in Homs, and that many residents had been denied permission to return to their homes, with officials citing lack of proof that they had indeed lived there.

“The first step in the plan has been achieved,” he said. “It involved expelling the inhabitants of these areas and burning up anything which connects them to their land and homes. The second step will be replacing the original inhabitants with newcomers from Iraq and Lebanon.”

In Zabadani, Amir Berhan, director of the town’s hospital, said: “The displacement from here started in 2012 but increased dramatically in 2015. Now most of our people have already been taken to Idlib. There is a clear and obvious plan to move Sunnis from between Damascus and Homs. They have burned their homes and fields. They are telling people ‘this place is not for you anymore’.

“This is leading to the fragmentation of families. The concept of family life and ties to the land is being dissolved by all this deportation and exile. It is shredding Syrian society.”

At stake in postwar Syria, with the war beginning to ebb, is more than who lives where when the fighting finally stops. A sense of identity is also up for grabs, as is the bigger question of who gets to define the national character.

“This is not just altering the demographic balance,” said Labib al-Nahas. “This is altering the balance of influence in all of these areas and across Syria itself. Whole communities will be vulnerable. War with Iran is becoming an identity war. They want a country in their likeness, serving their interests. The region can’t tolerate that.”